Barely a month ago, IDC Canada’s Nigel Wallis said during a webinar that the novel coronavirus crisis has contributed to the most significant deceleration in ICT spending in modern times.

And while the folks at IDC Canada did their best to soften the blow from their latest projections for information communications technology (ICT) spending by highlighting the rapid expansion of online capabilities among small businesses during this week’s webinar, an audible sigh from Wallis, IDC Canada’s research vice-president of IoT and industries, quickly set the record straight.

“We’ve taken a few more weeks to analyze the numbers, and unfortunately, it looks worse now than it did then,” Wallis said. “Canadian ICT spending this year will decline more than it did in the 08-09 financial crisis or the post 9/11 .com crash.”

Canada is looking at an “unprecedented” 5.4 per cent decline for the year for the combination of telecom and IT, Wallis explained, and the cumulative impact of ongoing trade restrictions, layoffs, and overall business uncertainty had changed the projections since even last month when probable projections for ICT spending for the rest of 2020 hovered around -5 per cent.

Canadian businesses are delaying their purchases of servers and storage devices, Wallis said. But don’t expect that trend to last much longer, he indicated, as server and storage spending data from past recessions shows that companies can only delay infrastructure purchases for so long. 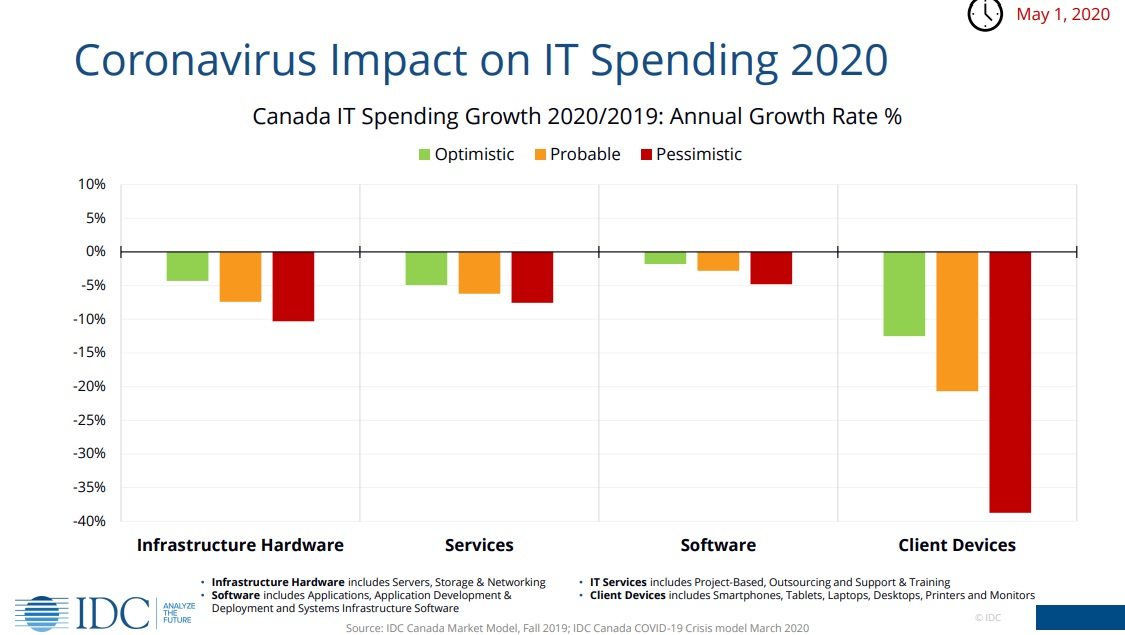 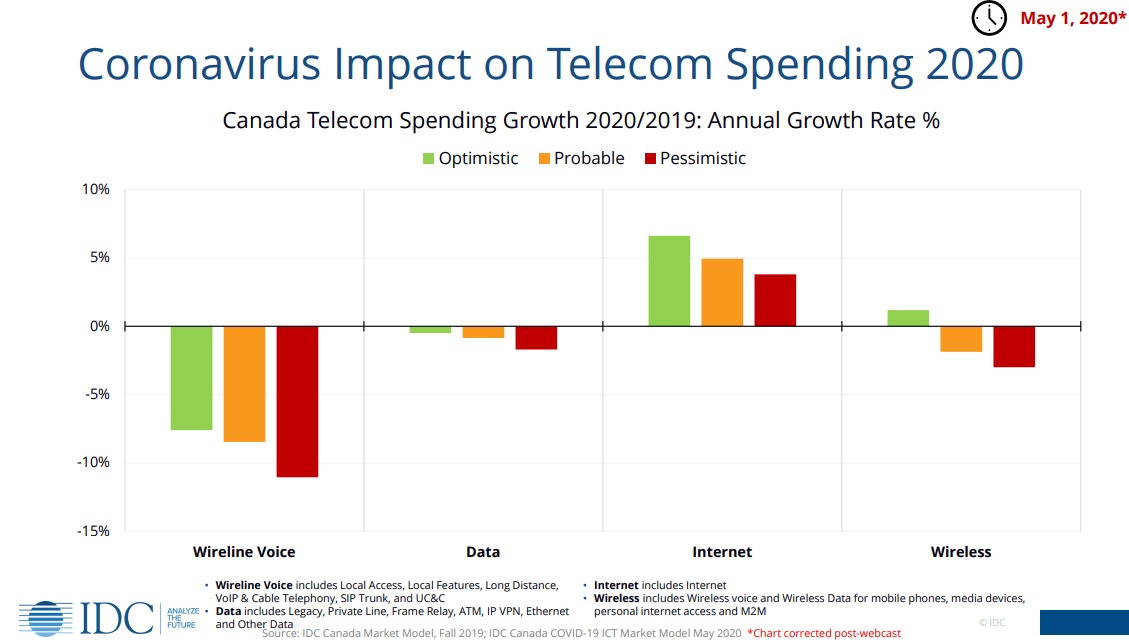 Last month IDC’s projections suggested a glimmer of hope for software sales growth this year, but the latest projections have turned those projections upsidedown, and all three scenarios – optimistic, probable, and pessimistic – indicate negative growth for the remainder of the year. The services market isn’t looking much better, and client devices plunged further into the red, going from a probable -15 per cent annual growth rate to -20 per cent. When it comes to devices like laptops, the mad rush to get new endpoint devices into the hands of teachers and parents working from home was recorded and tracked by IDC’s devices tracker in Q4 2019. Since then, Canada has been ravaged by a supply-constrained market, Wallis said.

The telecom space is also seeing red, according to Tony Olvet, vice-president of research at IDC.

Across all four telecom categories, including wireline voice, data, internet, and wireless, spending will hit a -1 per cent growth rate. Olvet said that internet would be one the most “insulated” categories in the telecom space as people across the country are stuck at home, connecting to a bevy of online services.

Last month, Telus said that as of March 16, home internet usage had gone up by 25 per cent. During major events like government news conferences, its mobile data has seen periodic peaks of 40 per cent. General text messages have increased by 30 per cent, while video picture text messages rose by 50 per cent.

In its network traffic analysis during the pandemic, Nokia reported an unprecedented 20 to 40 per cent increase in peak traffic globally, usually in the evenings, in just four weeks. For reference, most networks see a 30 to 45 per cent growth per year. Teleconferencing apps saw a 300 per cent growth in usage.

“But higher data usage doesn’t always translate directly to revenue growth due to the elimination or expansion of data caps plus high employment loss. This will challenge even the internet services market,” Olvet said.

Small businesses struggle to keep up

IDC Canada tapped into its IT advisory panel in April to pick its brain about how COVID-19 will impact its organizations’ revenue growth plans for 2020.

In a Tweet after the webinar, Wallis said this will be a major issue during the recovery phase. “There’s already a secular trend towards concentration of profits – and it’s hard to imagine the crisis, if unchecked, won’t lead to a deepening of that effect. I don’t see how that’s good for anyone other than C-level execs & shareholders,” he wrote.

The survey results did reveal that work from home efforts have increased the awareness of cybersecurity and privacy risks among small and large businesses.


A Guide to Working Remotely, Efficiently and Securely

Whether or not you believe remote work is the future of work, here it comes. Recent events have brought remote work into focus, and every employer will have no choice but to react. Download Now →
Follow