Canada’s strict data sovereignty regulations have been a significant deterrent for many Canadian companies looking to move to the cloud. But with all three of the largest global hyperscale cloud providers – Amazon Web Services (AWS), Microsoft Azure, and Google Cloud Platform (GCP) – building data centres in the country over the last year, the journey to the cloud has been simplified and Canadian companies have responded well.

IT World Canada’s fifth annual CanadianCIO Census found that while CIOs have been slow to adopt cloud for security and data sovereignty issues, they now rate it as the most productive technology for growth.

Microsoft Azure launched its Canadian region in March 2016, AWS opened its Canada (Central) region data centre in December 2016, and GCP announced plans to join the fray in March 2017, signaling that these hyperscale providers are serious about compliance with Canadian data regulations, which require certain sensitive data of public institutions to be stored within the country.

While their cloud services were available in Canada previously, having a local region means that organizations dealing with sensitive data or strict regulations, such as financial institutions or the healthcare sector, can now take advantage of cloud storage. 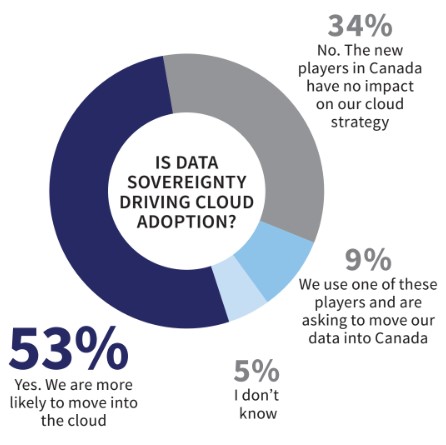 Out of the more than 160 senior Canadian IT leaders surveyed, 53 per cent say they are more likely to move to the cloud now that these hyperscale providers have Canadian-based data centres.

“Cloud is the new and growing wave of outsourcing,” the census found. “Cloud services are displacing traditional outsourcing, especially for infrastructure services (e.g., data centres, servers, storage). Further growth in cloud services is expected next year in Canada as vendors have moved to remove the one remaining obstacle to Canadians embracing cloud for their key infrastructure – data sovereignty.”

For example, education technology company Echo360 unveiled at the end of July that its video and active learning platform will now be available in Canada as a cloud service thanks to the new AWS Canadian data centre.

Fred Singer, founder and CEO of Echo360, explains that before AWS’ move into the Canadian environment, it could not deliver the cloud version of its video learning platform to Canadian universities, despite their desire for more innovative technology. Canadian customers were serviced from the company’s other global locations and could only use on-premises software.

But with its new partnership with AWS, it can finally provide Echo360 customers the “golden standard” of data storage and shared services.

“This announcement marks a shift from traditional old-school on-prem video platforms in Canadian schools to leading edge technology thanks to AWS,” Singer tells IT World Canada. “We had clients on our old system but it was challenging to deal with their desire to move to the cloud and to be more cutting edge before AWS was here because of the strict data privacy rules. This partnership really alleviates that and now we can deliver without compromise for the first time, and that’s a big deal to Canadian universities.”

Cloud exceeding expectations as it becomes a less concerning investment

CIOs of companies already in the cloud are speaking out too – 70 per cent of respondents rate the technology “as having met or exceeded expectations” thanks to benefits like increasingly secure, reliable, and flexible platforms with the potential to lower operational costs and improve customer service and company reputation.

These positive reviews are motivating others to move towards utilizing cloud services. This year’s trends point to strong growth in cloud adoption in 2018 and a decline in on-premises infrastructure, which will lead to cost reductions in crucial areas. 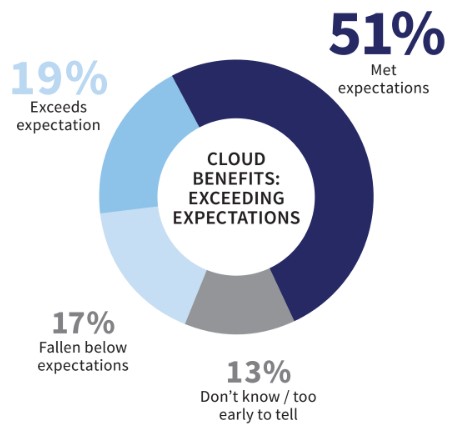 Interestingly, the CIO Census highlights the fact that cloud technology has actually become less of a concern for respondents looking forward, dropping from the number two spot in 2016 to seven in 2017. Big data and analytics were ranked in the census as the issue that will have the most significant business impact in the next five years, followed by digital transformation, customer experience, and security.

However, the census suggests the reason for this is that CIOs see cloud as a technology “more fully adopted within five years, with lesser impact into the future.” With three global hyperscale providers now in Canada and cloud adopters on the rise, this could be an indication that the technology has finally been adopted as a secure and scalable platform for businesses and C-suite executives.

Mandy is a lineup editor at CTV News. A former staffer at IT World Canada, she's now contributing as a part-time podcast host on Hashtag Trending. She is a Carleton University journalism graduate with extensive experience in the B2B market. When not writing about tech, you can find her active on Twitter following political news and sports, and preparing for her future as a cat lady.

What Canadian CIOs need to know in 2021

Should we be concerned about the digital literacy of Canadian board of directors?