Software developer platform GitHUB, today reported that its systems are operating at 100 per cent capacity even as the distributed denial-of-service (DDoS) attack against the site continues.

The Web-based Git repository hosting service was hit last Thursday, by a series of DDoS attacks that sent massive volumes of Web traffic to the site.

Reports said the attack appeared to zero-in on two Chinese anti-censorship projects hosted on GitHUB. One project mirrored the contents of the New York Times for Chinese online readers and the other project is run by Greatfire.org, a group that monitors online censorship by the Chinese government. Greatfire.org develops ways for Chinese citizens to circumvent this censorship.

All systems reporting at 100%. Attack traffic continues, so we remain on high alert.

The GitHUB status page as of Monday afternoon: 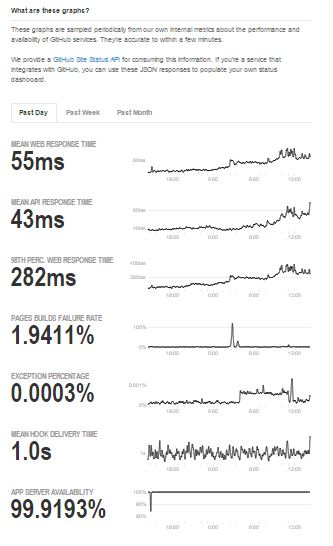 On May 28, GitHUB reported some difficulties.

The ongoing DDoS attack has adjusted tactics again. We are continuing to adapt and mitigate it.

GitHUB said that the attackers kept on changing their DDoS tactics.

An earlier announcement by the site said the initial attack involved “a wide combination of attack vectors.”

“These include every vector we’ve seen in previous attacks as well as some sophisticated new techniques that use the web browsers of unsuspecting, uninvolved people to flood github.com with high levels of traffic,” according to GitHUB. “Based on reports we’ve received, we believe the intent of this attack is to convince us to remove a specific class of content.”

Nestor E. Arellano
Toronto-based journalist specializing in technology and business news. Blogs and tweets on the latest tech trends and gadgets.
Previous article5 must-read cloud stories for March 30
Next articleEight per cent of your partners may be a high security risk: Study