Based on a handful of predictions published in one of Forrester’s recent reports, Predictions 2017: CIOs Push For Speed Amid Volatility, CIOs can expect customer demand to push firms to their limits in the coming year.

“We think that IT has to move beyond traditional goals and start leading with measures around outcomes and agility,” said Matthew Guarini, vice-president and CIO of research at Forrester.

According to the technology and market research firm, most of the focus in 2017 will be on the customer. “Customer obsession,” or obtaining and retaining customers, is the way forward for IT departments and firms next year.

Forrester’s top takeaway from the report data shows that the pervasiveness of information and devices is leading customers to demand new services at a far faster pace — and it’s the CIO’s job to keep up.

“By measuring IT against an outcome metric like ‘new customers added’, you can create alignment between IT and the business,” said Guarini, who also co-authored the report.

The report warns CIOs that the current business environment will change drastically, and “gone are the days of stability and predictability.”

The research outlines a few related items CIOs should expect coming down the pipeline in 2017: 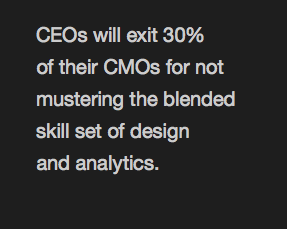 Because of these higher demands and shifting realities, the report also forecasts that business-to-consumer CIOs will be forced to focus on speed to keep up with market pace. They expect agile and DevOps to dominate the field to ensure faster delivery on projects, and a dearth of IT talent will cause new sourcing methods to emerge.

Guarini mentions that artificial intelligence, in particular, will grow deeper roots in the industry in 2017.

“In 2016, Alexa and Siri became pseudo personal assistants that put AI into everybody’s pocket, yet the vendor landscape remains heterogeneous and fragmented and the use cases are scarce,” he explained. “In 2017, CIOs will partner with their marketing and CX colleagues to reap the benefits of AI as it will increasingly be integrated into existing architectures and applications as a way to drive innovation throughout 2017.”

Guarini also underscored the emerging importance of CIOs in the year to come.

“IoT’s ability to create and deepen relationships with customers (B2C and B2B) and create the linkage between new customer front ends and operational back-end systems has largely gone untapped,” he said in an email. “But as CIOs shift their attention to crafting differentiated experiences in 2017, they will create structured IoT approaches for more diverse use cases, create business insights at multiple levels of their organization, and, ultimately, start to bridge the gap between the physical and virtual world.”

In another report from Forrester titled Predictions 2017: Security And Skills Will Temper Growth Of IoT, the firm explores the dichotomy of the promise of IoT. While the technology could hold the key to enhanced customer relationships and business growth, it also can leave businesses vulnerable to security breaches.

But the IoT report offers tips to help CIOs protect their firms, including working with developers to ensure over-the-air patching for reliable network connectivity for IoT devices, and running security vulnerability testing.

Lindsey Peacockhttp://lindseypeacock.com
Lindsey Peacock is a freelance writer, editor and American expat based in Toronto. This proud Atlanta native has written for a variety of news and business publications across North America, including Business in Vancouver, BCBusiness magazine, Fort McMurray Today and The Atlanta Journal-Constitution. Blogging, sweet tea and black-and-white movies are a few of her favourite things.
Previous articleCSO role was “fake PR” for Toronto startup, McAfee says
Next articleHPE offers on-premises Flash storage with cloud pricing