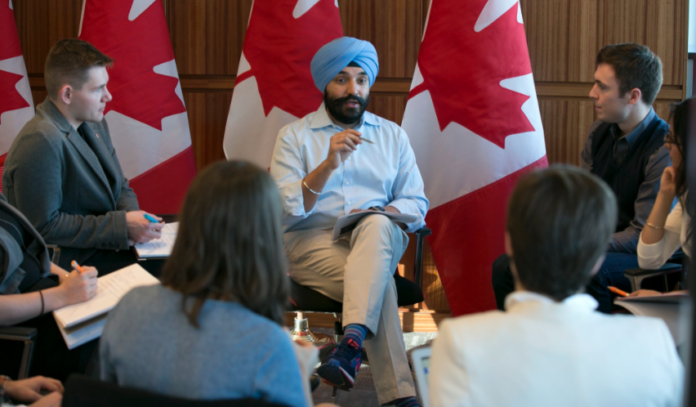 Businesses that want to test their products or services on 5G wireless equipment will get a shot at some of the $400 million in funding announced on Monday morning in Ottawa.

The federal government and provincial governments of both Ontario and Quebec will chip in equal parts of a total $200 million investment with technology partners developing 5G wireless technologies. Minister of Innovation, Science, and Economic Development Navdeep Bains made the announcement.

Those five partners, Ericsson, Ciena Canada, Thales Canada, and IBM Canada and other private sector partnerships will match their government’s funds and invest another $200 million into the project. The public-private partnership is being dubbed Evolution of Networked Services through a Corridor in Quebec and Ontario for Research and Innovation (ENCQOR). The government funding for this partnership comes in part from the $1.26 billion Strategic Innovation Fund that the Liberals announced in their last budget.

#StrategicInnovationFund investment in an increasingly connected world will make Canada a leader in #5G tech. pic.twitter.com/lTLqJucErP

ENQCOR’s corridor won’t be continuous 5G access stretching down the 401 from Waterloo, Ont. to Montreal but rather a network of innovation hubs that can provide testing access, according to Mark Henderson, chairman of Ericsson Canada. Ericsson is partnering to provide its 5G equipment to those innovation hubs.

“The whole idea is there is funding for development of 5G through R&D activities,” Henderson says. “But a big portion of this will be going to the SME (small to medium-sized enterprises) community.”

The research facilities and laboratories established or enhanced in Ontario and Quebec will serve as a hub for development of 5G and related technologies. This will include programmable broadband networks, IoT, silicon photonics, big data analysis, and cloud computing. ENQCOR will provide a way for businesses to test their products and services with 5G equipment.

The ENQCOR corridor is slated to be available in September or October, Henderson says. At that time, a call for projects will be issued and some of those firms that submit projects will be selected to receive funding to conduct their testing. In Ontario, the Ontario Centres of Excellence will conduct the call for proposals. In Quebec, Centre Facilitant la Recherche et l’Innovation dans les Organisations (CEFRIO) and Prompt will coordinate the call for proposals.

A government press release depicts 5G technology as an enabler for a more connected world, powered by Internet of Things (IoT) devices. “Imagine a world where you start of the day right because your refrigerator has tracked how much food you have and ordered replacement items for you,” the press release opens. “Your commute is safer and more productive because you are in a self-driving car. You can easily navigate traffic in a smart city.”

For Henderson, the corridor representing an open platform where solutions for different industries can be tested, including mining, education, clean tech, and autonomous driving.

“The idea that you’ll have these companies come forward and prove the business case is fantastic,” he says. “It will give us the capability to have a sort of crytal ball to see what will work from a business point of view.”

5G wireless speeds are theoretically 100 times faster than current 4G technologies. The standard is still under development, but the industry expectations are that it could provide not only faster download and upload speeds, but a more reliable and persistent connection to IoT devices.

“You’ll probably see the 5G standard split in two to accomplish both of those,” he said.