It seems like everything in today’s economy is shifting to an on-demand model accessed digitally, so why not have the role of CIO accessed the same way?

The on-demand or sharing economy model that’s eating the world and counts success stories like Uber and AirBnB as its bannermen is what inspired Andrew Dillane to ask that question. The former president of the CIO Association of Canada (CIOCAN) and former CIO of Randstad Canada feels the answer to it is his new business – DigitalCIOs Inc. You just have to look at the numbers to see how the idea makes sense, he says, as there are a few thousand CIOs in Canada, but many more businesses that could use one.

“These companies are at a disadvantage and they’re falling behind,” he says. “They’re not able to take advantage of these new cloud technologies.”

Cloud computing came with a promise to level the playing field for smaller businesses compared to large enterprises, Dillane says. While the ability to buy compute resources that scale with a business and instantly access software without the need to install it is available to small businesses now, it’s still the enterprise level firms that are making more effective use of the technology. The reason

The reason for this is often a breakdown of communication between business executives and the IT leaders at smaller companies, Dillane says. That’s the sort of thing a CIO could help to fix. He realized the problem after speaking with smaller organizations around the world, including many executives in The Netherlands while he was doing work in the venture capital community.

He’s not the only one to notice a talent shortage. ManpowerGroup’s 2016/2017 survey ranks IT staff as the second most-difficult type of job to fill globally, right behind skilled trades. That was a jump up from ninth place the previous year, and includes developers, programmers, database admins, and IT leaders and managers. 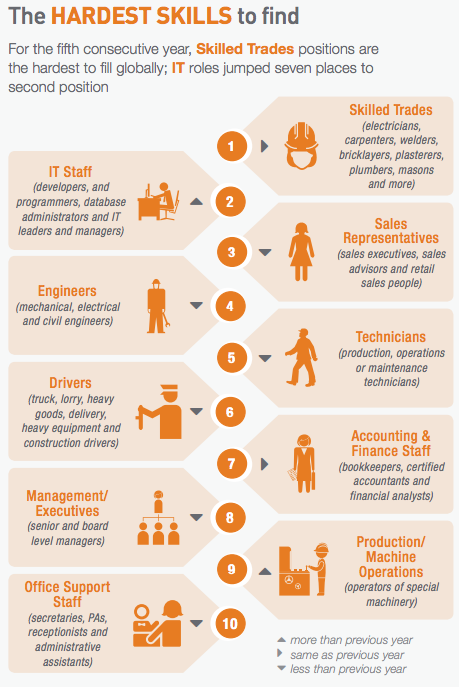 Dillane realized he could use his connections with other former CIOs to address that talent shortage in a unique way.

“I know some people that dabble and do a couple of projects here and there, but there’s no branding or methodology behind it to keep them busy,” he says. “It creates a flexible model where more organizations can benefit from CIOs that have been there, done that.”

The goal of Digital CIOs will be to pair clients with a CIO that will take on a part-time and long-term role with that organization. The CIO could contribute one or two days a week, or perhaps one or two days a month, depending on the needs of the client. It’s not just about deploying that ERP system and parting ways, Dillane says, it’s about facilitating long-term change.

Given that 28 per cent of employers worldwide are considering exploring alternative sourcing strategies to shore up their in-house talent, that sort of arrangement may be palatable for many businesses.

Dillane thinks clients will be able to trust their part-time CIOs just as well as a full-time employee when they see the value they can bring to the table. Often business leaders are surprised that CIOs bring more than just a technological skill set. Plus, clients will have access to a larger brain trust once Digital CIOs onboards more CIOs for hire.

“Part of the value proposition is having a group of CIOs and the potential to do some group think about what’s going on,” he says. “That could lead to a lot less risk for organizations.”

He expects small to mid-sized organizations that are going through a lot of change, or dealing with merger and acquisition type of activities.

Brian Jacksonhttp://www.itbusiness.ca/
Former editorial director of IT World Canada. Current research director at Info-Tech
Previous articleConnecting the Atlantic Region’s IT Community
Next articleCanada will need 216,000 tech positions filled in these 5 key sectors by 2021