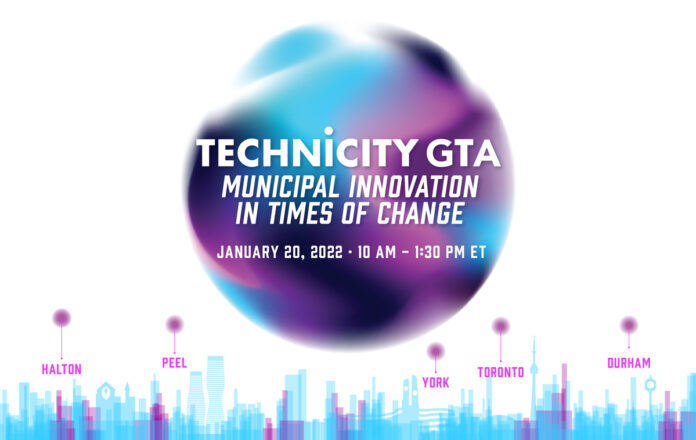 The increased pace of digital transformation during the pandemic will help cities recover and thrive in the future, said two mayors from the Toronto area speaking at ITWC’s Technicity GTA conference.

“The technical innovation that’s happened is a tool to help us move forward,” said Allan Thompson, mayor of Caledon. “It’s basically just like what the automobile has done, what the aircraft has done in the last century. I think this innovation is the new wave of the industrial revolution.”

“Our greatest challenge over the past two years has been the COVID 19 pandemic,” said Bonnie Crombie, mayor of Mississauga. “However. Mississauga is building back to better.”

Both mayors said they expect strong economic growth in the years to come.

Caledon has faced a special challenge given its small population of 80,000 spread over 730 square kilometers, said Thompson. The lack of connectivity to broadband Internet was a major concern when he became mayor in 2014, he said. Now, the municipality has made significant progress in getting communities and businesses connected with fibre. “It’s really advanced us into the 21st century,” Thompson said. “We see small startups and intelligent manufacturing coming here. In our agricultural sector, the modern farm today is the wired farm.”

Thompson said he anticipates that Caledon will grow to 300,000 people over the next 30 years. Its economic strategy aims to develop 125,000 jobs during the same period.  “We want to create innovation and bring the top companies here to invest,” he said. “Going digital is key and we have to have the support services to do that.”

Similarly, Crombie expects that Mississauga’s focus on digital transformation will lead to further economic development in the city. As an example, she pointed to Lakeview Village, a 177-acre waterfront development project that is designed to include an “innovation district.”

During the pandemic, the city has been actively supporting the use of technology by its business community, said Crombie. Mississauga’s business enterprise centre set up a business to business (B2B) platform to help companies communicate directly with each other. “This direct communication platform allowed one company to open up their onsite vaccination clinic in real time when there was an oversupply available,” she said. “This type of rapid coordination would not have been possible without the B2B platform.” As well, she noted that, since 2019, the city’s digital main street program has helped over 400 businesses go virtual.

In 2021, Mississauga was recognized as a top seven intelligent community in the world by the Intelligent Community Forum. Crombie said the city is continuing to invest in its smart city program with a recent focus on the Internet of Things. The city has installed thousands of sensors on its fleet vehicles, traffic signals and facilities, she said. “We are build a digital map of the city that will allow us to make smarter decisions about our services and how we plan our future.”

Thompson agreed. “The only way we are going to get better as a community is by sharing ideas and collaborating. I do believe this is a new way and I think there are many exciting things to be coming out of this.”

Cindy Baker
Cindy Baker has over 20 years of experience in IT-related fields in the public and private sectors, as a lawyer and strategic advisor. She is a former broadcast journalist, currently working as a consultant, freelance writer and editor.
Previous articleOver 90 WordPress themes and plugins from AccessPress hacked, says report
Next articleSiksika Nation community members are growing their local tech sector