SAN FRANCISCO — The WMworld conference is all about removing the burden of IT operations from hardware and putting it on software. Dell Inc. took advantage of this week’s show here to release several new products it says will help its customers do just that.

Included in the new products is its first Intel-based thin client that supports VMware’s PC over-IP (PCoIP) technology, in addition to other connectivity options. It also has a new all-in-one unit made for delivering virtual desktops and a datacentre-in-a-box targeted at small to mid-sized businesses, intended to be offered by Dell’s service provider partners. Finally, there’s a high-end appliance for those who want to use a virtualized workstation but need plenty of computing horsepower.

“What does it all really mean?” Dan O’Farrell, the senior director of product marketing of cloud client-computing for Dell asks rhetorically. “We’re really focusing on expanding the use cases, the feasibility, the viability and resourcefulness of virtual desktops to more organizations and more people. We think desktop virtualization is on the cusp of going mainstream.”

O’Farrell came to Dell when it bought thin computing specialist Wyse Technology two years ago. Since then, he says he’s seen a lot of companies buying up thin clients in large volumes and using them for various departments. While he can’t share numbers on what that volume looks like, he says that some ambitious goals were set at the time of Wyse’s acquisition and that those goals have been exceeded “to the delight of the rest of the company and our team as well.” 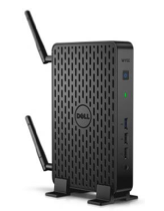 This new thin client is replacing Dell’s previous C-class device, which is the company’s best selling thin client unit. The first thing to notice is the five connection options on the back panel. That includes serial ports, DVI, USB 3.0, Fibre SSP, and Ethernet.

“Given the fact that virtual desktops are being displayed in more places than ever, we wanted to create a device that could literally be put anywhere,” O’Farrell says. “You never want to pull something out of your network just to introduce something new.”

It’s also more powerful, providing about four times the graphics rendering power and twice the processing power than the previous model. All that and it requires just 2 watts of power. The unit will also be priced at $70 than its predecessor, selling for $430.

There’s also Linux-based thin client options available with Dell’s 5000 and 7000 models. These units are well-suited for those running multimedia applications, engineering applications, or other more demanding tasks. These clients offer a quad-core CPU. They are priced in the $550-650 range. 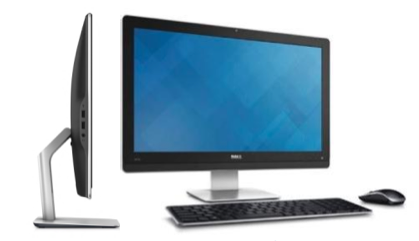 The all-in-one thin client runs on ThinOS. “It offers great performance and security for a thin client and nothing else, there’s no excess baggage,” O’Farrell says. “It’s just a tiny footprint the size of a digital photograph.”

Once the power button is flipped on, the desktop appears in seven seconds. There’s no local apps, it is only meant to run virtual desktops, and is compatible with Teradici’s PCoIP protocol to connect to VMware. That makes these ideal for IT organizations that need iron-clad control over their end points.

Simply put, it’s a datacentre-in-a-box. Businesses can add more stacks to the unit as needed.

“It targets the small to mid-sized company that have heard of the virtues of virtual desktop but don’t have the where-with-all to do it themselves,” O’Farrell says. “The new wrinkle is that we’re including virtual SAN in this.”

Consolidating storage into one unit could result in cost benefits of 10 to 40 per cent, he says, especially if a company has a lot of task workers that don’t require terabytes or storage each.

This upgraded version of the same box is for service providers that want to offer data centre as a service to their customers. The customer could either host the box on their on premises and have it managed by the service provider remotely, or it could be hosted remotely and act as a multi-tenant device in some situations.

“It’s so simple you just drop the end point off on people’s desks and the rest is taken care of by the service providers,” O’Farrell says. Partners interested in offering the new service can have confidence that VMware [NYSE: VMW] and Dell tested it for them.

For high-end users looking for extra power under the hood, this appliance is built to run graphics-intensive applications. While virtual desktops are typically avoided in these high-demand situations, this appliance can handle a big workload.

It can be configured with one or two Nvidia GPU K1 or K2 cards and it connects to Dell’s quad-core client over the network. As a fully contained server, you can package it as one rack or in a stack.