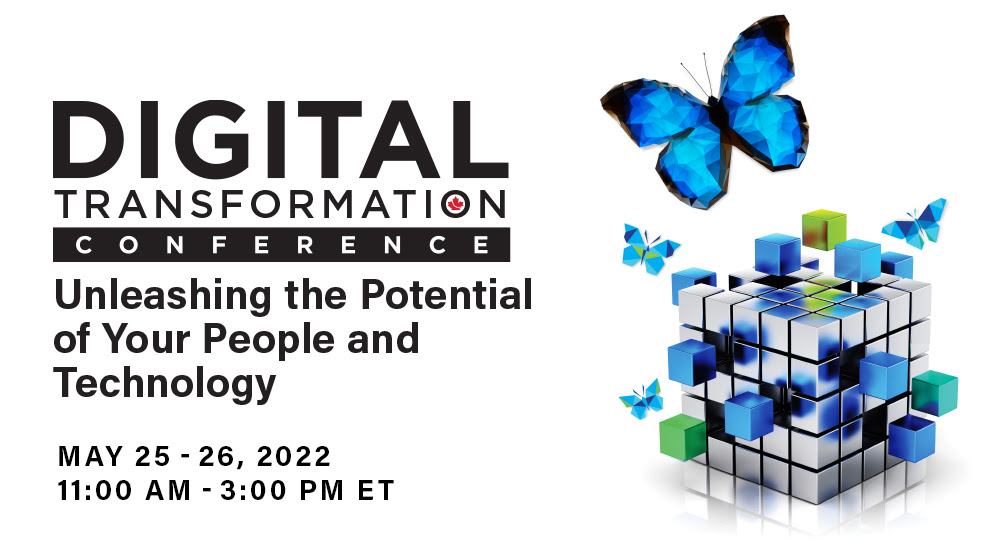 Have you secured your seat at the Digital Transformation Awards and Conference? This two-day event will bring together Canada’s leaders in IT and technology to share their experiences and answer your questions while networking through the DX-TV platform.

Here are some of the sessions to look forward to at the hybrid event:

With the introduction of FortiNDR, Fortinet says it is delivering full-lifecycle network protection, detection, and response powered by AI to detect signs of sophisticated cyberattacks; offload intensive human analyst functions with virtual security analyst; and identify compromised users and agentless devices. FortiNDR also features native integrations with the Fortinet Security Fabric as well as API integrations with third-party solutions for a coordinated response to discovered threats to minimize their impact. Common automations to speed response include quarantining devices generating anomalous traffic, enforcement with third-party devices via an API framework, triggering an orchestrated process guided by SOAR, and more. Moves, a Toronto-based all-in-one financial technology company (banking app) exclusively for gig workers, announced today that it has closed a C$6.38 million seed funding round to advance its mission of making the gig economy work for its workers.

Moves says it launched its mobile app in 2021 after spending hundreds of hours in cars, on bikes, on foot, in parking lots, and in burrito lines listening to gig workers. Since its founding, Moves has built its products in partnership with gig workers, focusing exclusively on their needs. The company has over 10,000 members on track to earn over US$56 million by year’s end 2022 and better manage their money with early deposits for weekly payouts, earnings insights across 16+ supported apps, and cash advances up to US$1,000.

To accelerate its mission of making the gig economy work for its workers, Moves has taken a radical approach of enabling thousands of gig workers to become owners in the companies they earn on. Inspired by recent shareholder activism towards ESG objectives, Moves is allowing its members to earn share rewards in Uber, Lyft, Doordash, Grubhub, Target, and Amazon through the Moves Collective which holds over 4,500 shares across the supported public gig companies.

The funding round is being led by the venture fund OMERS Ventures and a group of former gig economy and consumer technology senior executives from companies such as Airbnb, eBay, Facebook, Lyft, Uber, and Shopify. Other investors for this round include Panache Ventures and N49P Ventures.

With over 20 branch locations and a major presence in the U.S. and Canada, TIG serves a wide-reaching and diverse client base in enterprise, government, education, and small and medium-sized businesses (SMB) markets.

“Converge is excited to continue our strategy of growth and global expansion through the announced addition of Technology Integration Group to our portfolio of companies,” stated Shaun Maine, chief executive officer of Converge. “TIG brings strong industry expertise across State, Local, and Education that we can leverage across North America and gives us additional presence in Canada, adding to our strength of offerings with the Canadian government. The combined strength of Converge and TIG’s ability to serve our clients in markets around the world will present an exciting opportunity for us to continue reaching our clients and solving their solution needs wherever they may be.”

Consideration for the purchase consists of US$74 million in cash to be paid at closing. Positive net working capital will also be paid out at closing, the company noted.

Apple has launched a global ad campaign highlighting the amount of information collected about individuals online. The company said, “Over the past decade, a large and opaque industry has been amassing increasing amounts of personal data. A complex ecosystem of websites, apps, social media companies, data brokers, and ad tech firms track users online and offline, harvesting their personal data. This data is pieced together, shared, aggregated, and used in real-time auctions, fuelling a US$227 billion-a-year industry. This occurs every day, as people go about their daily lives, often without their knowledge or permission.”

The commercial, in the form of the depiction of an auction of an individual’s data, points out how much information data brokers accumulate and sell to anyone who will pay for it. And (it’s an Apple commercial, after all), it demonstrates iPhone features that combat the data harvesting. Check it out here.

RBC has improved its RBC Mobile App with a feature that combines client card and biometrics authentication with PIN verification.

Canadian telecom providers will have to rip out any Huawei and ZTE equipment from their 4G and 5G networks without compensation, the federal government has announced.

A recent report from Telus noted that ransomware “attackers are strategic adversaries who perform detailed reconnaissance before launching attacks. They gather information about financials and insurance coverages to gauge the ability of a victim to pay a certain amount.…

Ready or not, the hybrid workplace has finally arrived. That means employers are just starting to discover the gaps in their ability to accommodate workers, wherever they may be.

Toronto-based venture capital firm Round13 today announced the launch of a dedicated, crypto native fund to invest in the emerging blockchain and digital asset market. The fund is also partnered with Satstreet, a Canadian digital investment firm with a deep network of relationships in the crypto universe.

How to avoid consumer pain points around wearable medical technology

The market for consumer medical wearable technology is one of the fastest-growing sectors in the technology industry. Recent data showed that the global wearable healthcare market is projected to reach US$30.1 billion by 2026, up from US$16.2 billion in 2021. Driven by a range of factors – including the response to Covid-19, the rollout of 5G connectivity and improvements in the range and functionality of devices – our appetite for wearable technology has soared over the last two years.

As more organizations focus on digitally transforming their businesses, and the need for technology and its services grow, tech workers are facing burnout and seeing a strain on their mental health.

Globalive has signed a network and spectrum sharing agreement with Telus to better position itself as a buyer for Freedom Mobile, whose divestiture stands as the major hurdle in Rogers’ efforts to acquire Shaw.

Strata Identity, U.S.-based identity orchestration provider for multi-cloud environments with a significant presence in Vancouver, has announced the availability of the Hexa open-source project that enables organizations to unify and consistently manage all of their access policies across multi-clouds, on-premises systems, and vendors.

Telus has announced the investment of $17.5 and $17 billion in network infrastructure, operations, and spectrum across Alberta and British Columbia (B.C.), respectively, over the next four years.

Canada’s federal privacy law requires companies to protect the sensitive information that they hold about employees, customers and partners.

This episode reports on being prepared for working from hone, hacking contents winners, a ransomware attack on a third-party public school data provider amd more.

Pragya Sehgal
Born and raised in the capital city of India - Delhi - bounded by the river Yamuna on the west, Pragya has climbed the Himalayas, and survived medical professional stream in high school without becoming a patient or a doctor. Pragya now makes her home in Canada with her husband - a digital/online marketing fanatic who also loves to prepare delicious meals for her. When she isn’t working or writing around tech, she’s probably watching art films on Netflix, or wondering whether she should cut her hair short or not. Can be contacted at psehgal@itwc.ca or 647.695.3494.
Previous articleCyber Security Today, May 23, 2022 – A work from home warning, students are victims of ransomware, and more
Next articleHashtag Trending May 24 – Meta sued over Cambridge Analytica; Teslas strain Texas power grid; Hyundai opens its first U.S. plant