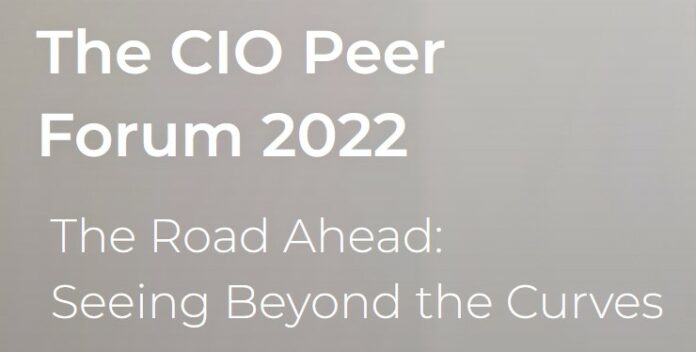 The role of the CIO is evolving, but to what? According to a recent panel at the CIO Peer Forum held by the CIO Association of Canada and sponsored by IT World Canada (ITWC) and Canadian CIO, there has never been a better time, nor a more challenging time, to be a CIO. Yet, surprisingly for some, the challenges are not always technical. Today’s CIO must excel at strategy, business acumen, and know-how to build and harness corporate culture to drive innovation and business results.

“We are strategic – for now,” was one of the quotes from the introduction to this session on “the evolving role of the CIO” .

There was a wide range of topics discussed; not surprisingly, the first was cybersecurity, which is top of mind for every CIO. The challenge, Barton pointed out, was not technical – in his words, it was “having the staff with the cybersecurity skills, and this whole skills gap conversation, is the real showstopper.”

The good news? The pandemic really did change the view of the CIO, at least for now.

According to Barton, “CIOs now have greater visibility and credibility with senior leaders (meaning the C-suite) than they ever had before. (Yet) in our conversations, a lot of CIOs felt they’re kind of an outlier to the C-suite. You have the CFO, the CMO, the CEO, they kind of all are in this group. And then the CIO is sort of over there. All of a sudden pandemic happens and CIO has now got a lot more credibility and visibility, like we are so important to making the business function and run, that that credibility now can be leveraged. And the question is, how do we continue leveraging it moving forward?”

Barton further noted that the pandemic had “changed the perimeter” that CIOs needed to protect.

Lazar-Tippe echoed this, stating that her organization has “taken the approach of giving people the choice, (and they) want to continue working from home.” The challenge, she went on to say, is how to “make the office available to (their employees) but they definitely don’t want to compromise on the working experience. And they want to maintain the connection with staff.”

The new world necessitates new approaches. For example, the idea of shadow IT has exploded with the advent of software as a service. But Lazar-Tippe said that a new approach is needed to this age-old problem. “It’s very easy to purchase something on a credit card and you basically sign a contract with the click of a button.”

Her approach is not at all heavy handed. “I’ve really started to communicate about why it’s important for us to be involved and to set up a very lightweight governance process.” Rather than make anyone jump through bureaucratic hoops, Lazar-Tippe said, “We’ve put a very quick and easy risk assessment.” As she further stated, “I can’t sweat the small stuff. If we can get through that quickly, go ahead, do what you need to do. But I’m going to come back to in a little bit of time, and we’re going to see if this should be a standard piece of software or product that we should use in our organization going forward. It’s allowed me to have a little bit of a balanced act.”

Another challenge for the CIO goes beyond abandoning some of the “command, control and compliance” styles of the past. Inness noted that it’s not enough for the CIO and the organization to encourage behaviour – the organization (and the CIO) has to “live it” in terms of employees and stakeholders.

Sustainability has become a value that that organizations have to live if they are to attract and retain employees and retain the support of key stakeholders.

Inness noted, “We attract staff that are passionate about the environment, and we’re working with stakeholders as well. And you know, it’s not always pleasant to work with a regulator, that you have a business to run and we’re pushing on you to give us your targets and make sure you’re staying aligned. So for us, we really need to demonstrate that we’re living the same values.”

Sustainability is becoming more and more of an issue. Lazar-Tippe quoted a recent ITWorldCanada article focusing on e-waste. She said, “It has been estimated that it takes at least 1.5 tonnes of water, 48 pounds of chemicals and 350 pounds of fossil fuels to produce a computer and monitor. That’s astounding. So when you look at smartphones, you know from a production aspect, it utilizes rare earth metals, so mining has drastically contributed to the device’s carbon footprint. And in 2019 alone the world produced a staggering 53.6 million tons of e-waste.”

So how can CIOs help to tackle this challenge? According to Inness, sustainability is challenging, and requires the organization to be innovative. “That innovation requires new approaches, particularly when it comes to culture,” she noted, “You need to be innovative, you need to be constantly thinking about what’s next and what’s coming. My personal experience … is to really focus on more of a bottom-up approach. Don’t make it too complicated, really assess your culture and give people the time for innovation.”

Are CIOs up for this challenge? It would seem that we have indeed proved that we are, according to this panel. The response to the pandemic – making the rapid shift to remote work – erased the remnants of the old stigma of IT holding back progress. Indeed, the CIO and IT have been the driving force as the pandemic made us face digital transformation on steroids.

According to Lazar-Tippe, organizations have discovered what they can really do if the business and IT are working together. She stated, “I think it was a proud moment for technology teams, and we were really pushed to the forefront. The organization all of a sudden let us make decisions very quickly, which typically had been a very difficult thing to do…But I do feel the businesses were right there with us. I think they were supporting us to lift some of those organizational barriers that had been there before – the compliance, the procurement rules, the audit, and the risk perspectives – and while I think it was done out of necessity, I also learned that it really does demonstrate what can be accomplished if every person in the organization is laser focused on an outcome.

Inness agreed. She stated that she is “seeing there’s a new respect.” Further she noted, “People are starting to understand that we’re core to that foundation. There’s more recognition for advice and expertise required to sustain our organizations, which has been a big plus. For me, personally, my role has evolved, totally evolved through the pandemic, and been a key leader driving that significant organizational change and really supporting that cultural change.”

Will CIOs be able to hold that new-found respect? They can according to Inness, but it will take work. She related a recent conversation when “I had a board member say to me, you know Lisa, there’s a perspective that organizations no longer require a CIO role.” She said that she didn’t see this as a negative. Instead, she said, “I believe they were thinking of it in how they perceived the traditional role of the CIO, that had such focus on managing existing infrastructure and applications, just because they’re overwhelmed with the amount of work and effort that goes into that. And they weren’t seen as drivers of transformation.”

But the CIO has become more than that, and is aptly poised for a new role.  Inness said, “We have such a unique experience. We see every business unit, we’re supporting every one of them. So we got a very broad perspective of the business, and and we also know how to do work, and we can really contribute to their strategies and the prioritization across a whole business. We also have a significant network of partners. I’ve learned from some of the best organizations. They’re willing to come in, share their new technologies, share their advancements. And also from our peers. So we are pretty good at tapping into that and having that continuous learning. My belief is we just need to accept that our role will change. We have to be open to new ways of working. We have to allow the business into our worlds more, just as we’re stepping into theirs.”

Jim Lovehttp://www.changethegame.ca
I've been in IT and business for over 30 years. I worked my way up, literally from the mail room and I've done every job from mail clerk to CEO. Today I'm CIO and Chief Digital Officer of IT World Canada - Canada's leader in ICT publishing and digital marketing.
Previous articleChris Barry named the new president of Microsoft Canada, succeeding Kevin Peesker
Next articleThis week in Ransomware – Friday May 6, 2022