While Intel has saved details on the U and P-series for later in Q1, it gave an overview of what users can expect from its enthusiast H-series.

There are eight SKUs available at launch. At the top end is the Core i9-12900HK processor, featuring six P-cores and eight E-cores for a total of 14 cores. This is a massive increase over the Core i9-11900H, which only used eight cores. One could argue that since the i9-11900H only used high-performance cores, its performance should be better or equal, but the Core i9-12900HK should more than compensate for the difference in the number of P-cores with its better per-core performance and superior multithreaded performance.”

The i9-12900HK sports 24MB of L3 cache, and up to 5GHz of turbo frequency. The processor supports 20 threads as only the P-cores support hyperthreading. As with all products with the “K” suffix, the chip is unlocked for overclocking.

The Core i7 range features 14 and 10-core configurations. They all carry six performance cores, but the Core i7-12650H has four E-cores instead of six. The Core i5 features up to 12 cores, pairing four P-cores with eight or four E-cores.

Also, Intel’s vPro support, previously offered as a single-tier technology, has been divided into Enterprise and Essential tiers, with the Enterprise tier being the full vPro solution for large organizations while the Essentials is a pared-down version designed for small and medium-sized businesses.

Intel promises that the 12th gen Core H-series mobile processor will boast up to 20 per cent faster single-threaded workloads than last-gen thanks to the Performance core’s (P-core) IPC improvements. When working in tandem with the Efficiency core (E-cores), the flagship H-series processor offers up to 40 per cent faster multi-threaded performance.

In addition to gaming performance, Intel says that it has optimized the processor for all content creators. As well as photographers and videographers, Alder Lake H-series will be suited for architects, engineers, product designers and more. 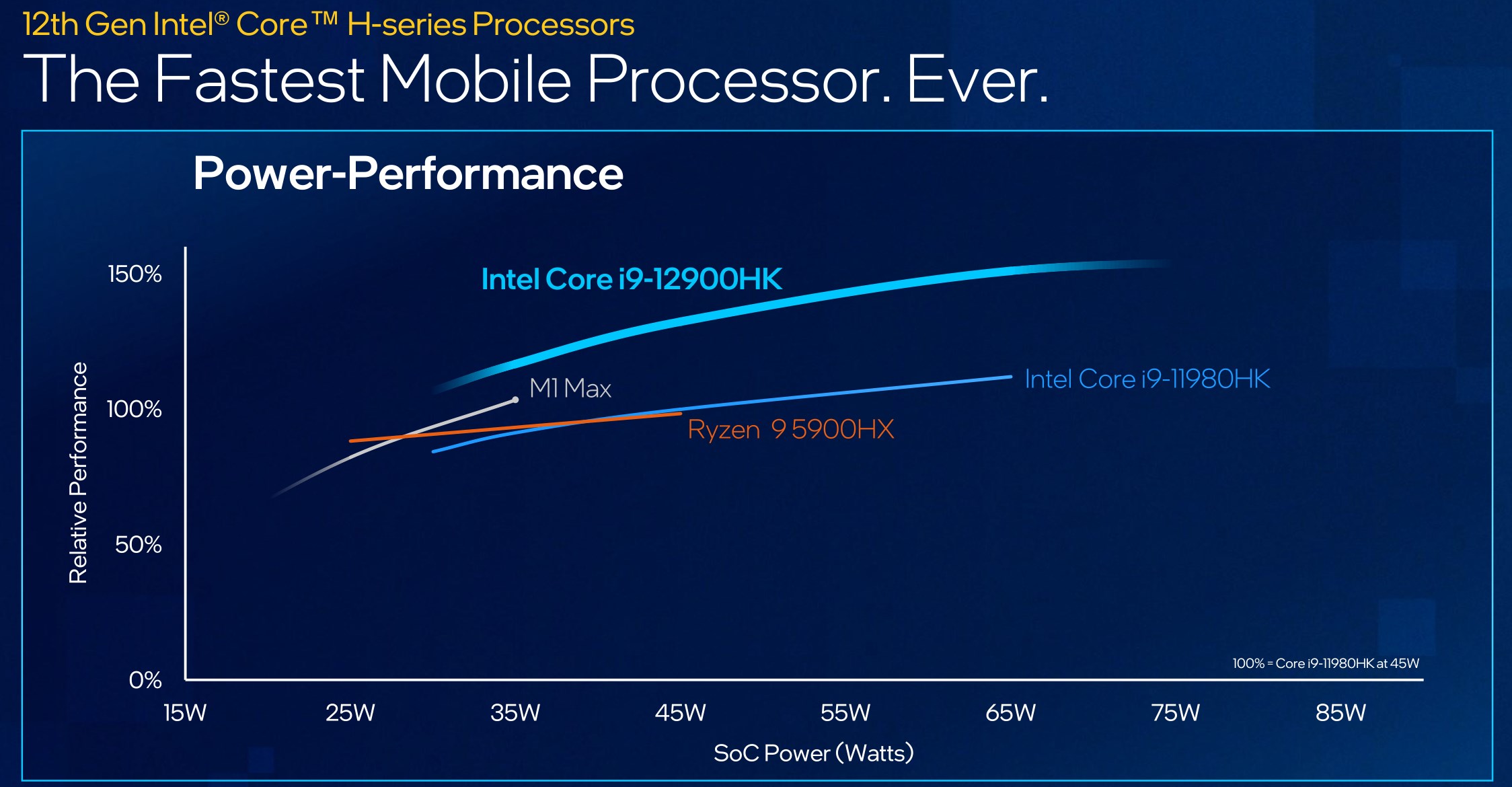 Intel has shown that the Core i9-12900HK outperforms both Apple’s M1 Max and AMD’s Ryzen 9 5900HX at equal TDP. Moreover, the processor offers better performance scaling in turbo mode than either of its competitors at higher power draw.

In addition to the new core architectures, the 12th gen H-series processors also bring support for new features like DDR5 memory and Thunderbolt 4. Along with DDR5, it will also support DDR4. Intel said that although it was an enormous uptake to support both types of memories (and their low-power variants), the effort goes a long way in bridging the transition to the new DDR5 memory standard.

Curiously, the 12th gen H-series omits PCIe 5 lanes, a feature present in Intel’s Alder Lake-S desktop processors. Instead, it supports 16 PCIe 4 lanes, eight for discrete graphics and eight for PCIe SSDs. This was a purposeful omission, says Intel, explaining that PCIe 5 is actually built into these processors and validated electrically, however, due to the lack of PCIe 5 components in the current ecosystem, it was unable to complete its platform validation steps, and therefore chose to validate it for PCIe 4.

AMD hasn’t been sitting idle, either. At CES 2022, Intel’s biggest competitor released its own Ryzen 6000 mobile processors featuring the refined Zen 3+ architecture and RDNA 2 graphics, all built on TSMC’s 6nm node. In addition to its 45W H-series, AMD also released the 35W, 28W, and 15W parts designed for the full breadth of users’ computing needs.

Due to their differences in architecture, AMD and Intel’s cores can’t be directly compared. But speaking in a general sense, more cores typically means higher multithreaded performance. The Core i9-12900HK appears to have the edge here, but the AMD’s flagship Ryzen 9 6980HX has two more high-performance cores than the i9-12900HK. This interesting imbalance will surely produce some interesting performance comparisons.

The Ryzens have other cool features as well. It’s the first PC processor to feature the Microsoft Pluton security co-processor used to secure the Xbox. Additionally, AMD claims that the Ryzen 6000 series cuts down power consumption by 30 per cent from the previous gen, all the while increasing single-threaded performance by 11 per cent, and multithreaded performance by 28 per cent.

PC designs with Intel’s 12th gen mobile processors are expected to become available towards the end of January.

Tom Li
Telecommunication and consumer hardware are Tom's main beats at IT World Canada. He loves to talk about Canada's network infrastructure, semiconductor products, and of course, anything hot and new in the consumer technology space. You'll also occasionally see his name appended to articles on cloud, security, and SaaS-related news. If you're ever up for a lengthy discussion about the nuances of each of the above sectors or have an upcoming product that people will love, feel free to drop him a line at [email protected]
Previous article
Coffee Briefing Jan. 4, 2022 – accessibility maps; airlines request 5G delay; and more
Next article
Hashtag Trending Jan. 5 – Holmes found guilty; Apple hits $3 trillion; Internal combustion engines

85 per cent of I&O leaders expect to increase their automation within...