Intel’s next-gen Alder Lake processors are set to release later this year, bringing with them a new design philosophy on a new node meant to challenge AMD. But before its release, Intel provided a breakdown of its best features at Intel Architecture Day 2021 to answer one question: what makes Alder Lake tick?

Alder Lake uses three fabrics to link all its parts together and fine-tune power consumption. The path between the compute cores, graphics, last-level cache (LLC) and memory is the compute fabric, which can operate at 1TB/s. The input/output (I/O) fabric, which operates at 64GB/s, passes data between I/Os and internal devices. And lastly, the memory fabric operates at 204GB/s and can dynamically adjust the bus width and frequency for multiple operating points. Intel says that having multiple dynamically scaling fabrics allows Alder Lake to more efficiently direct power to where it’s needed the most.

Gracemont is the architecture name for Intel’s efficiency cores. It features an overhauled architecture with a deeper frontend, wider backend, and will be built on the Intel 7 node, previously known as Intel 10nm+. Its numerous energy and performance enhancements, as well as advanced transistors, converge to form the efficient cores that will debut in Alder Lake. 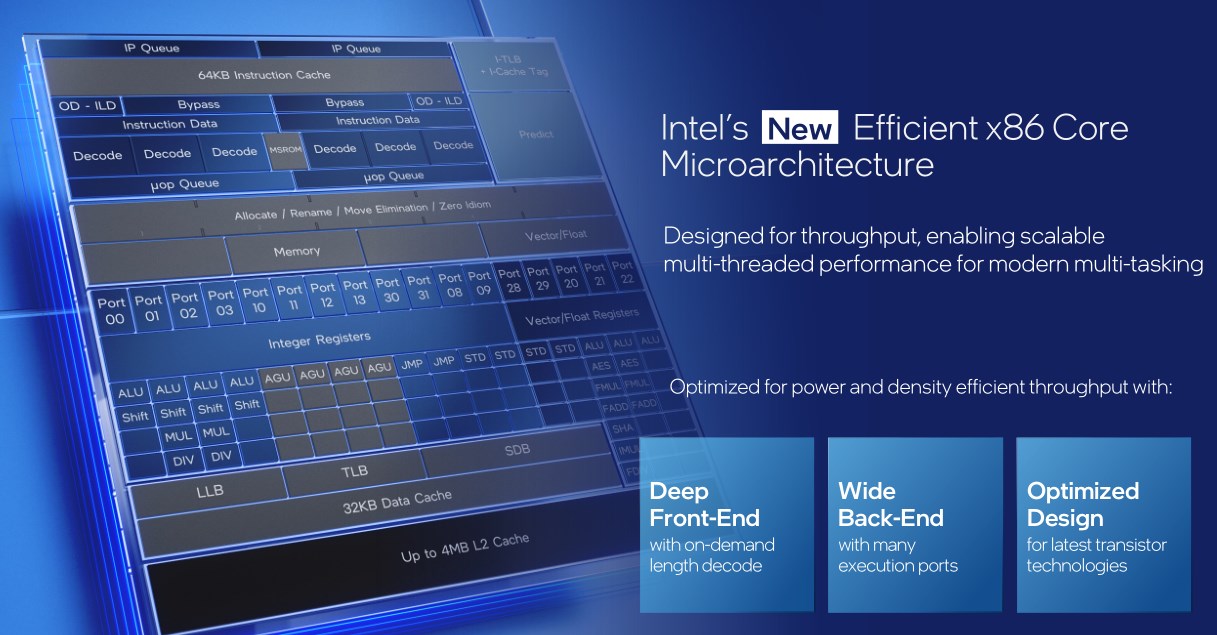 Branch prediction is a critical feature in modern CPUs. It predicts what instructions are needed next before a program even requests them, thereby reducing CPU wait times and wasted instructions. Many of the CPU processing stages depend on accurate branch predictions; for example, if there’s a mispredict, then the instructions stored in the out-of-order buffer may need to be flushed. Gracemont has a 5,000 entry-long branch target cache for its history-based branch prediction to help generate accurate instruction pointers, reducing the chances of mispredicts. 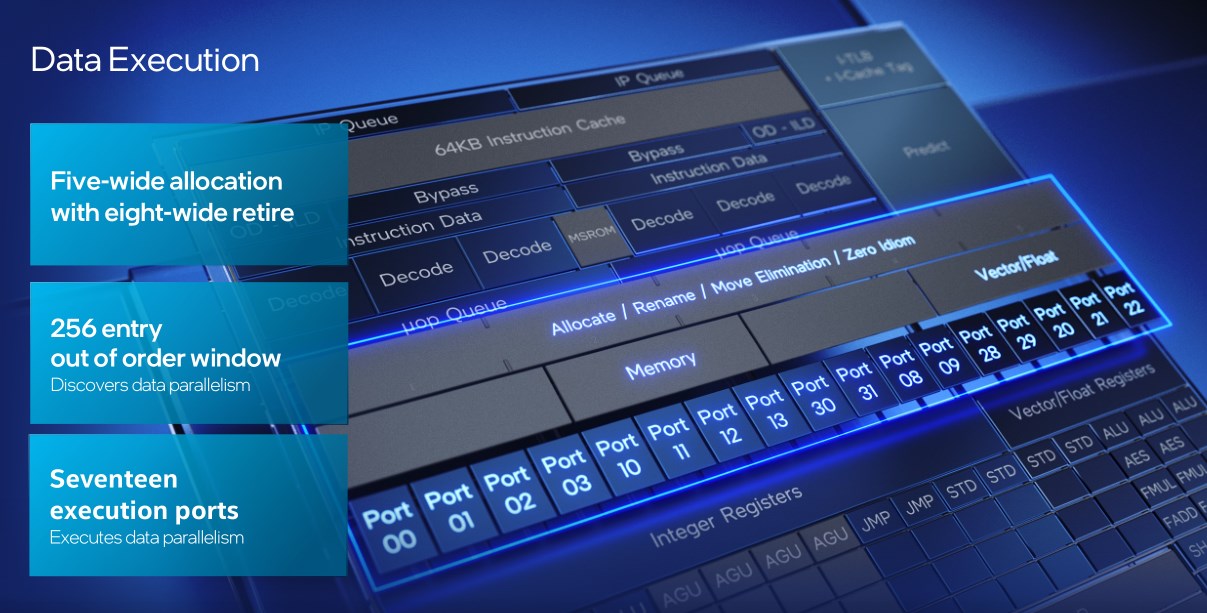 The main instruction decoder got an upgrade too. It can now decode up to six instructions per cycle while maintaining the efficiency of a much narrower core. The decoder, which translates opcode into micro-ops (uOps), is important in keeping the backend fed at all times so the processor achieves maximum efficiency; being able to decode more instructions per clock is of course better for overall performance. 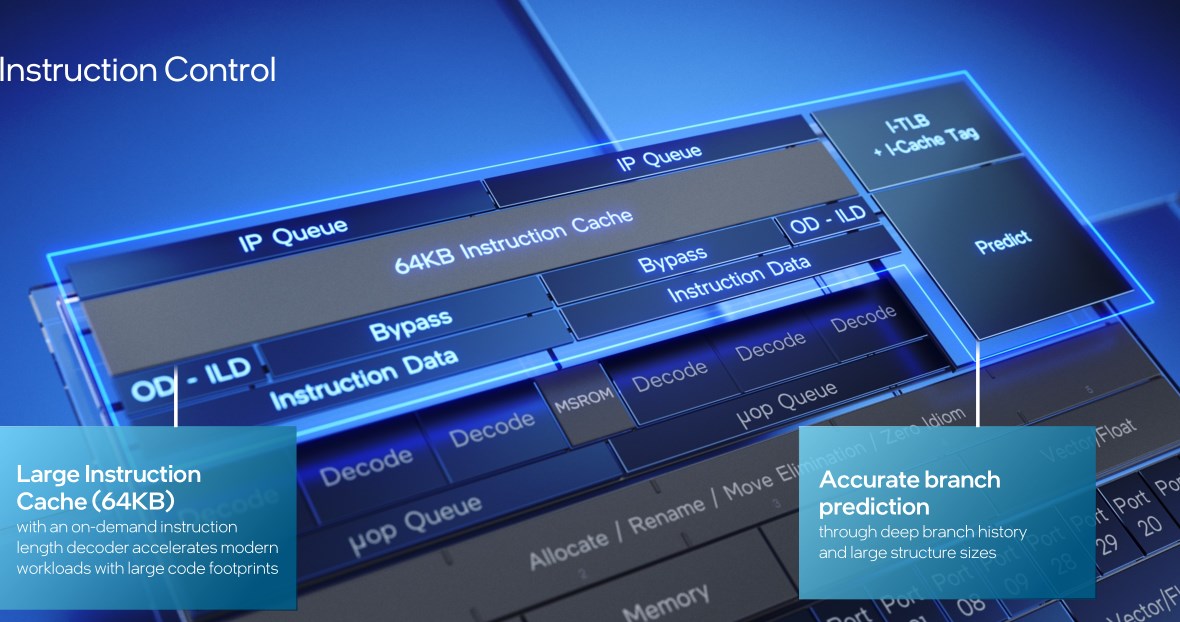 The decoders are aided by a new hardware-driven load balancer. Instead of dumping a long chain of sequential instructions onto a few decoders, load balancers break them up into smaller segments and distribute them across all of the decoders, increasing parallelism.

Further down the process flow are the data execution units, or EUs for short. Gracemont’s 17 execution ports can be scaled to the requirements of each unit. The integer EU ports are complemented by dual-energy multipliers and dividers. In addition, the single-instruction, multiple-data (SIMD) arithmetic logic units (ALUs) in the vector operations now support Intel’s virtual Neural Network Instructions (VNNI).

The story is much the same with Golden Cove, Alder Lake’s performance-core (P-core). The theme of making them deeper, wider and smarter persists, starting with branch prediction. 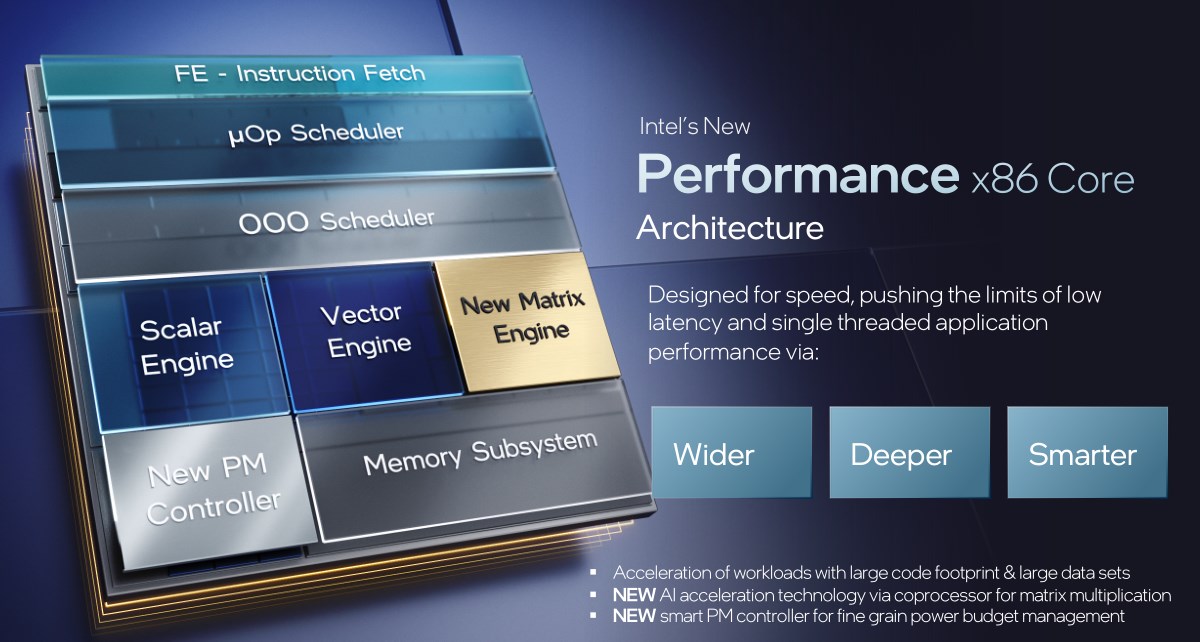 It can perform four table walks in parallel. A table, or a page table, is a “map” of virtual addresses assigned to a program and is used to help allocate memory more effectively. A table walk is the tracing of page tables to scope out which virtual memory addresses are mapped to physical ones. The mappings are stored in a translation lookaside buffer (TLB) to keep table walks to a minimum.

For programs with larger code footprints, Alder Lake’s P-cores feature double the number of 4K pages stored in iTLB, as well as improved branch prediction accuracy to reduce jump mispredicts and better code prefetch mechanism. The branch target buffer is also twice as large as the previous generation’s and uses a machine-learning algorithm to dynamically adjust its size to reduce power consumption or boost performance. 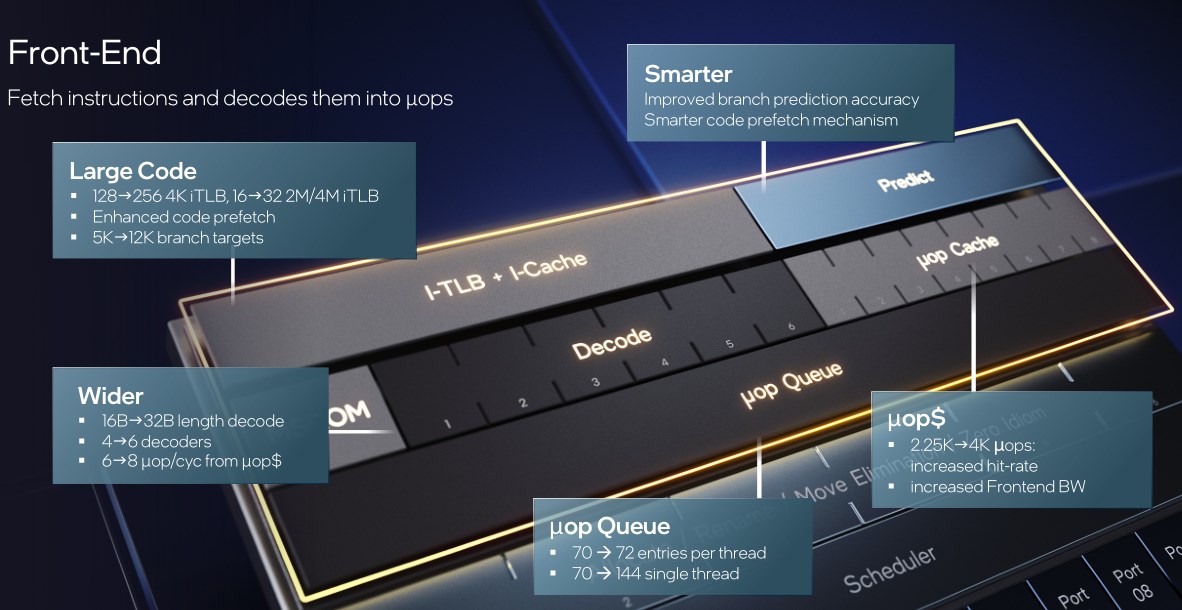 Being the performance core doesn’t mean efficiency is left on the curb; power management is also one of Golden Cove’s key focuses. On that front, Golden Cove features a new microcontroller that can measure and adjust power consumption in microseconds instead of milliseconds. Intel says the change is based on actual application behaviour instead of general speculation. The finer power tuning enables higher average frequency in any application without a severe power penalty.

Golden Cove has six lengthier decoders capable of running at 32 bytes per cycle. The uOp cache has been increased to hold 4,000 instead of 2,250 operations, allowing it to increase frontend bandwidth while reducing latency in a shorter pipeline. 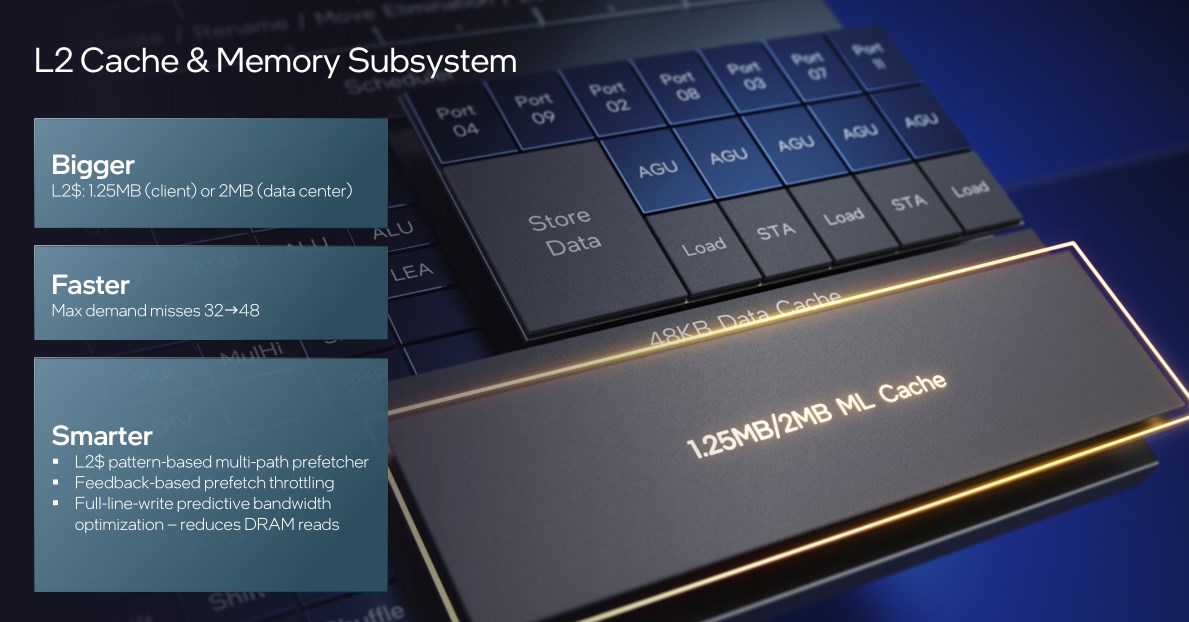 The frontend certainly saw some improvements, but Intel attributes the out-of-order engine as the component that separates Alder Lake from the previous architectures. The P-cores feature a six-wide register rename allocation and 12 execution ports, up from the five and 10 of the previous generation. Other enhancements include more physical registers, a deeper scheduling window and a new 512 deep reorder buffer. 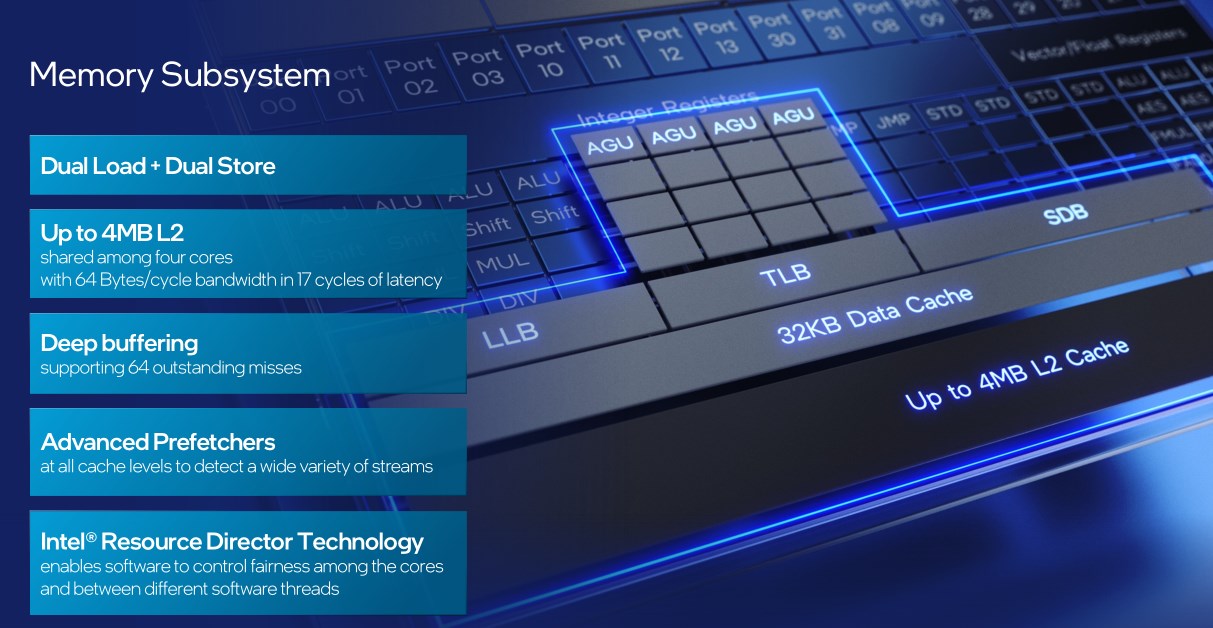 Both the L1 and L2 cache sizes have been expanded and their fetch rate increased. Two L2 cache configurations are available: 1.25MB for consumers and 2MB for enterprises. 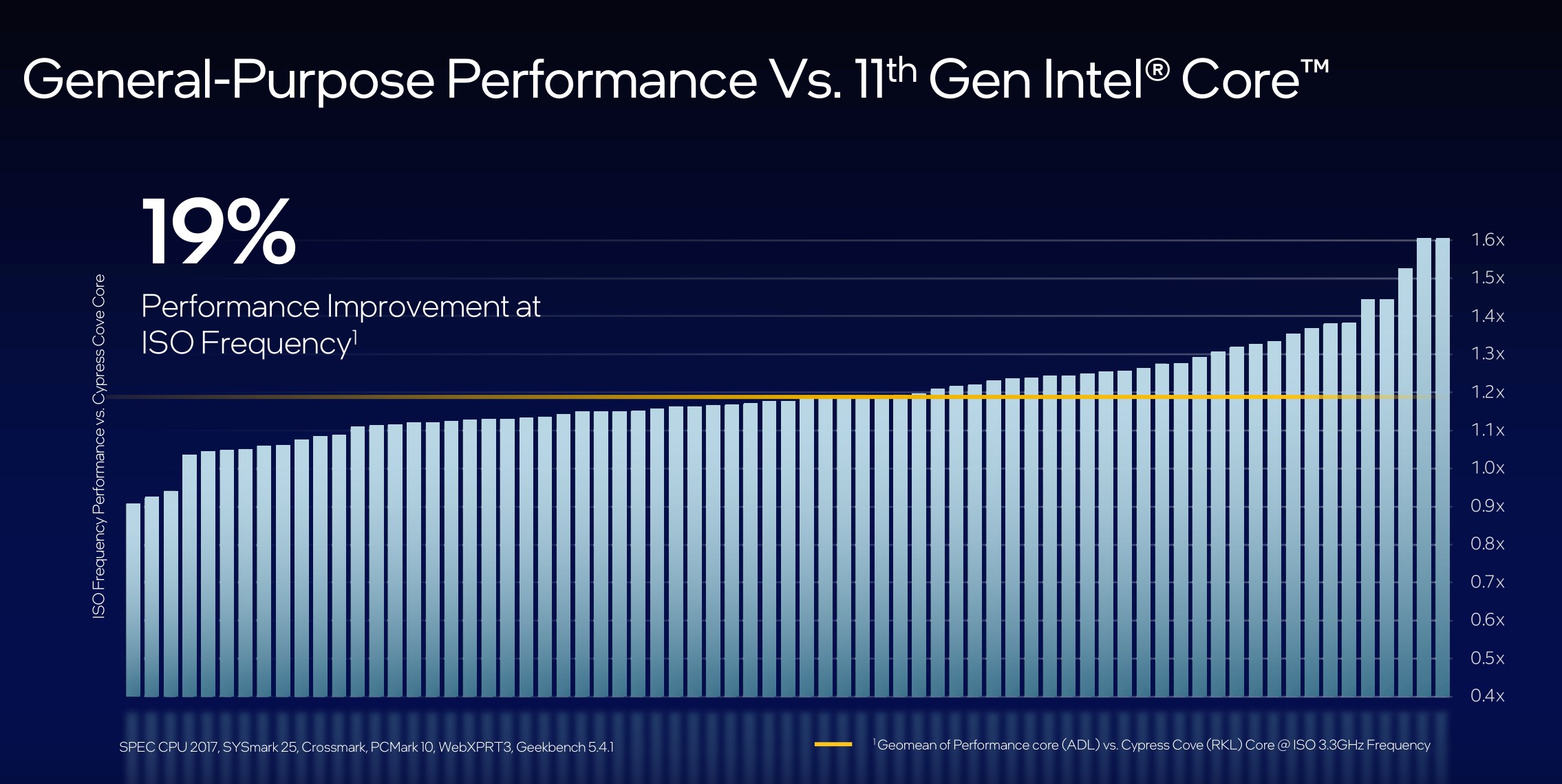 Improving performance while reducing power consumption is a perpetual balance struggle in processor design. With previous processor generations, a single core architecture had to do double-duty on both ends. With Alder Lake’s dedicated performance and efficiency cores, Intel hopes to better address the two ends, similarly to the way it’s done in today’s smartphone chips.

But blending architectures introduces its own set of challenges. Now that the processor is no longer monolithic, it needs a data highway that connects its parts to prevent latency, something engineers work hard to minimize. Thread scheduling also becomes an issue; what workloads should be prioritized and how? And how can they be optimized for both today’s and emerging workloads?

To address these issues, Intel added a new hardware scheduler called Intel Thread Director. Its job is to keep tabs on the instruction types being fed into the processor and help the operating system make optimal scheduling decisions. In addition to the programs, Thread Director still accounts for thermals, operating conditions, and power limits. It also picks out threads that need the most performance so it can assign them to the P-cores. Similarly, it delegates background tasks to the E-cores, and AI threads to P-cores. Everything is dynamic, based on the tasks at hand, and is fully autonomous. 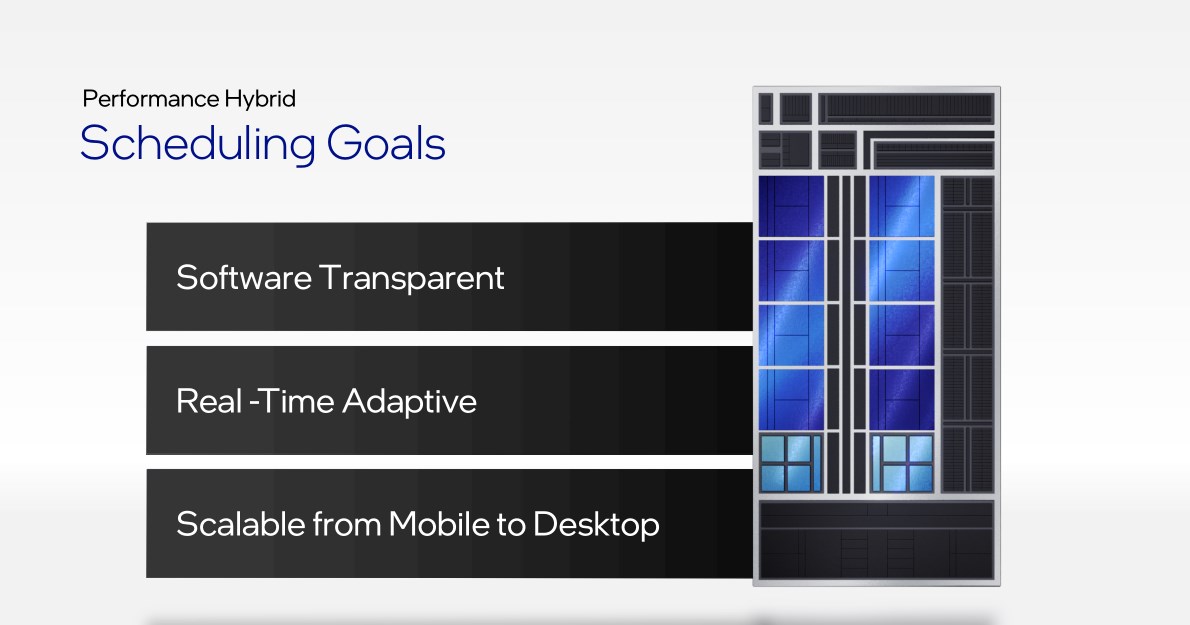 But that doesn’t mean Thread Director locks heavy workloads exclusively to P-cores. It will take advantage of any idle cores if there are resources available. In a heavy multithreaded workload, Thread Director will distribute the workload across all P and E-cores.

Tom Li
Telecommunication and consumer hardware are Tom's main beats at IT World Canada. He loves to talk about Canada's network infrastructure, semiconductor products, and of course, anything hot and new in the consumer technology space. You'll also occasionally see his name appended to articles on cloud, security, and SaaS-related news. If you're ever up for a lengthy discussion about the nuances of each of the above sectors or have an upcoming product that people will love, feel free to drop him a line at tli@itwc.ca.
Previous articleResourceful data: Alberta Energy Regulator
Next articleHashtag Trending September 28 – Mega-Retailers Curbed By California Law; Japan Breaks Internet Speed Record; Facebook Denies Instagram Wrongdoing