The surge in Canadian tech spending in 2015 is a thing of the past. Despite better than expected Canadian GDP growth, Canadian CIOs are plagued of uncertainties.

Forrester predicts in its ‘The Canadian Tech Market Outlook for 2017 to 2018’ report that Canadian tech market growth will slow to 3.7 per cent in 2018 due to lingering uncertainty that has surrounded the economy such as potential Trump administration trade policies.

The combined threat of raising household debt, poor wage growth, and double-digit growth of housing prices in urban city centers with uncertainty over what the Trump administration may do with its trade policies and the North America Free Trade Agreement (NAFTA) is enough for CIOs to stand their ground on increasing tech spending. Forrester says that growth will come in the form of software and tech services, but reluctance in spending significant amounts on technology will prevent any real growth in the tech market through 2018.

While actual computer equipment and communications equipment spending won’t see much growth, software will see a jump between 2017 and 2018. Software will only grow by 2.7 per cent in 2017, but as much as 7.1 per cent in 2018. This is largely due to the jump to the cloud many Canadian businesses are taking now that Canada has begun to truly enter the cloud with Canadian data centres eliminating previous concerns. Specifically, Forrester predicts a jump in spending on Software-as-a-Service (SaaS). 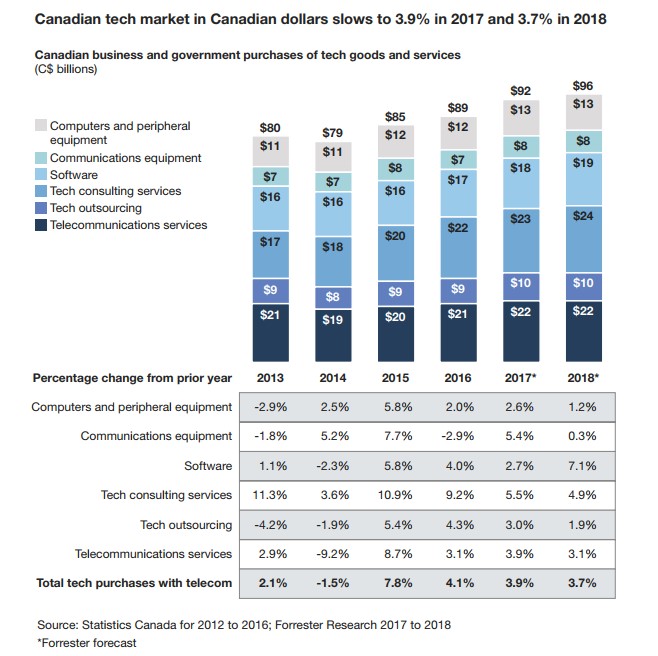 Consulting and systems integration services are expected to grow by 5.5 per cent in 2017, but will decline in 2018 to 4.5 per cent due to the transition to the cloud. Don’t worry however, as Forrester predicts that this will bounce back in 2019 and onward as SaaS becomes a larger part of software spending.

When it comes to tech spending as a whole, the Canadian governments continues to be the leader, spending $24 billion CAD. That’s roughly a quarter of the total tech spending in Canada. This is followed by business services and construction at $19.5 billion.

You can check out the full ‘The Canadian Tech Market Outlook for 2017 to 2018’ report here.

Alex Radu
is a Video Producer for IT World Canada. When not writing or making videos about the tech industry, you can find him reading, watching TV/movies, or watching the Lakers rebuild with one eye open.
Previous articleLowe’s ‘Holoroom How-to’ pilots seek value of VR for bricks-and-mortar retail
Next articleWhy the HBO breach was no surprise to a Forrester analyst