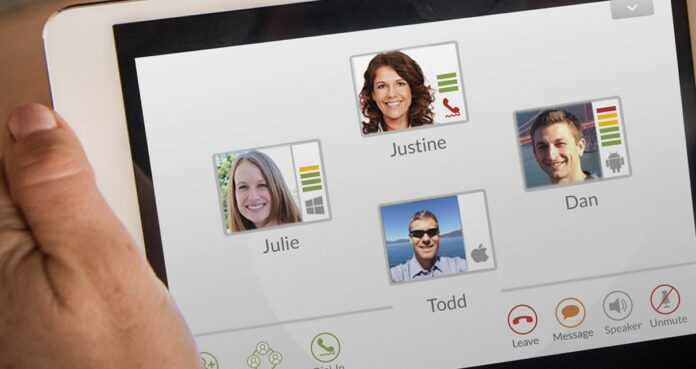 Large, on-premise conferencing solutions can be useful for well-resourced companies with in-house IT teams, but companies without dedicated IT staff need something smaller and simpler. Cloud-based collaboration systems can help bridge this gap.

Next week, San Francisco-based Voxeet launches the fourth iteration of its mobile and desktop-based audio conferencing system, designed to give companies an audio conferencing and collaboration system tailored to include mobile users.

Dustin Jordan, sales director at Canadian power equipment rental firm Trinity Power Tools, said the company has been using the system to pull around ten of its staffers into a daily audio ‘huddle.’

“Every single one of our sales project managers has this app on their phone and laptop and desktop computer,” he said. “Every morning, we do a five-minute sales team and project management huddle.”

The company, which does a lot of its work in the film industry in BC, and in Alberta within the gas and oil sector, has staff dispersed around the two provinces, including several people working in Northern BC.

The service includes a scheduling system which notifies call participants every morning at the same time, joining them to the call. “That keeps us accountable,” he said.

The product includes what Voxeet calls ‘TrueVoice,’ which is a high-fidelity sound feature that provides immersive 3D sound. When Jordan moves participants around the screen during the call, he is able to hear their voices coming from the left or the right, depending on where they’re positioned, he said.

“We tried Skype and Google Hangouts, but there were always issues with them,” he said, adding the company settled on this solution a year and a half ago.

One thing it doesn’t do is video, which is a service that Jordan still relies on Skype for. He conducts a regular Skype video meeting every Friday.

“Voxeet is designed for a quick 30-second update. Everyone is standing, no one is sitting down,” he said. “It’s not a long meeting at all.”

As companies increasingly work with contractors and freelancers — in addition to staff working remotely — quickfire huddles like this can be a good way to keep everyone synchronized without the need for a laborious meeting where the team must wait for laggards to join the call. It also might be suitable for an agile software development team that needs a regular morning scrum.

Still, Voxeet has its eyes on more structured meeting scenarios. Version 4 of Voxeet includes some new features. Participants are now able to record conversations, and can also share files and photos, putting it more in line with services like WebEx and GoToMeeting. They will also be able to make specific channels, and categorize saved conversations, files, and chats, which will be useful for different teams in the same company that want to use Voxeet.

The service will be free until February, when it will be rolled into Voxeet Pro, a paid service available by subscription.

Version 4.0 of Voxeet’s Android, iPhone, Mac and Windows desktop apps will be available sometime next week from its web site.