But in addition to modest pricing — $5 a month per user for up to 25 users, $10 a month for unlimited users, which includes two-factor authentication and password control — the Waterloo, Ont., company’s biggest differentiator is it automatically encrypts of all text messages and data it stores and transmits using AES256. Users hold the encryption keys.

That means, founder and CEO Jesse David stressed in an interview, that in addition to reducing risks from customers or Zebu being hacked, Zebu can’t see data for analysis or sharing, or sell metadata to third parties.

That could make it appealing to companies Zebu is pitching to such as law, accounting and marketing firms.

“I always wanted to do something that at its core would help small and medium businesses,” says David, who describes himself as a 22-year old part-time business and computer science student at Laurier University.

“I saw two problems small and medium business have, and I wanted to solve both of those in a single solution. The first was they didn’t have adequate software solutions. A lot of enterprises will use an ERP solution for managing everything in a company … It’s very powerful, a great asset but its also very expensive. So I wanted to find a way to bring that type of solution to a small or medium business. The second thing I saw is cyber security. A lot of large enterprises have entire IT departments [for security]. A lot of small-medium businesses don’t have that.” So was born the idea that all communications and data should be heavily encrypted. ”Even all the energy from a star exploding wouldn’t be enough to power all the computers you would need to break the encryption on the word, ‘Hi.’”

One early customer is Lakes Environmental Software of Waterloo, which makes air quality management and air dispersion modeling software for regulated companies such as mines, smelters and refineries. As its chief technology officer Michael Johnson explained, it needs to ensure the customer data it handles can’t be hacked.

Lakes Environmental was using Slack for instant messaging but wasn’t satisfied with the security controls. So when Johnson saw David make a presentation about the company’s early product at a meeting of the Waterloo-area innovation hub called Communitech he was intrigued. He signed his company up for its limited preview program.

That was almost two years ago. Today, with some 50 employees using Zebu, Johnson said he’s very satisfied. The encryption capability is “a huge feature.”

While it integrates with Dropbox, Git, Giphy, and Skype, he wishes Zeub integrated with more applications.

All versions of Zebu do come with a capability called External Connections, a bridge between customers for sharing encrypted information through the messaging app.

The mobile version supports Android and iOS devices. There’s also an enterprise version for those who want to host Zebu. 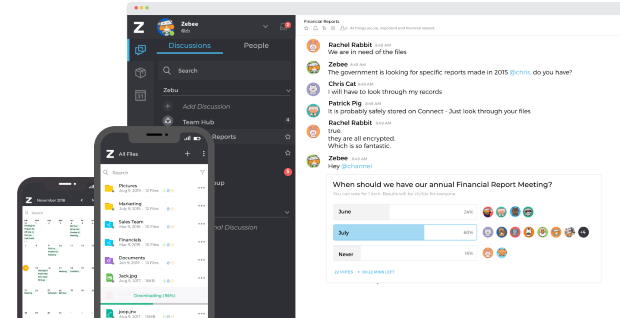 Carlos Sanchez Valle, senior research director for enterprise applications at Info-Tech Research, noted the app’s pricing is “very affordable,” but that may be because Zebu so far only offers three modules. A medium-sized firm might move to another solution if the feature set doesn’t expand fast, he said.

And while the encryption is important for some firms, Valle said Info-Tech research suggests the overall business value is what’s important to ERP buyers. Valle hasn’t been briefed by the company, but he said the business value of Zebu didn’t come across from just looking at descriptions on its web site.

Competitors include Slack and Huddle, he noted. Zebu might be in a good position for small-sized businesses, he added.

Zebu runs on Microsoft Azure’s platform with servers in Canada and Brazil. “The nice thing is we can throw up a server anywhere, David said.

In addition to Lake Environmental Software, the company has a number of other early customers and counts some 1,000 users around the world.

David’s family comes from Brazil, an area that sparked the company’s name – a zebu is a tough cow.

Howard Solomon
Currently a freelance writer, I'm the former editor of ITWorldCanada.com and Computing Canada. An IT journalist since 1997, I've written for several of ITWC's sister publications including ITBusiness.ca and Computer Dealer News. Before that I was a staff reporter at the Calgary Herald and the Brampton (Ont.) Daily Times. I can be reached at hsolomon [@] soloreporter.com
Previous articleRiding the wave: harnessing the power of data
Next articleIBM walking away from single cloud focus deserves ‘huge respect’ says Red Hat