Canadian CIO IT budgets are turning towards innovation

It’s not a fluke when it’s happened for the third time in a row – Canadian CIOs are allocating more of their IT spending towards innovation than ever before.

While the majority of IT budgets is still understandably put towards growing the business, that percentage is down for the third year running at 67 per cent in 2015, 65 per cent in 2016, and 62 per cent in 2017. The reason for this change in allocation could come as CIOs have worked to find cost savings in the operations of IT, but could also come with simply aligning the business with IT.

Carlos Palacio, group CIO at research firm Maru Group, told ITWC that the reason for this change doesn’t necessarily mean that CIOs are saving money or saving on costs. They could instead be finding better ways to optimize and align IT with the business as a whole.

“When it’s very aligned and optimized a lot of the increases are going to innovation – to things that are out of the box,” said Palacio. “It’s better to optimize and align the business and set it up for success in the future. That could have a significant impact not only internally in the organization, but externally as well.”

The growth in innovation or digital transformation spending seems to be universal in 2017. According to Gartner’s 2017 CIO Survey, CIOs are shifting their investment patterns in response to digitalization. The average CIO, says Gartner, is currently spending about 18 per cent of their IT budget in support of this mentality, and that number could rise to as high as 28 per cent in 2018.

IT budgets have overall increased in 2017. ITWC found that 57 per cent of Canadian CIOs reported that their budgets were increasing, with 11 per cent saying that budgets increased by over 15 per cent. Only 15 per cent replied indicating plans to decrease IT budgets. This growth will only continue as CIOs become, and IT as a whole, becomes more important in each organization. 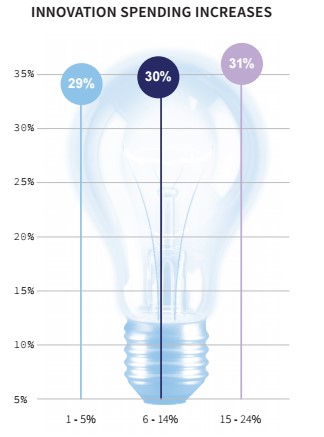 Between the ITWC and Gartner CIO surveys and Palacio, one idea is clear: CIOs are benefiting from an increase in IT budgets that can then better serve innovation for that organization. Gartner, for instance, points to the fact that this digital ecosystem that organizations are entering allows for a larger reach of a company, giving rise to new kinds of businesses, products, and services.

“I’ve seen an increase of real alignment and optimizations when organizations see the value of investing in IT. Emerging technology is attached to these opportunities that can propel the organization,” said Palacio. “CIOs need to see everything. Fortunately, if you have 360-degree view you can make very informed decisions and be more effective, and that can propel the overall business.”

Alex Radu
is a Video Producer for IT World Canada. When not writing or making videos about the tech industry, you can find him reading, watching TV/movies, or watching the Lakers rebuild with one eye open.
Previous articleOntario’s first Chief Digital Officer tackling provincial problems through a digital lens
Next articleHashtag Trending – Google reveals new look for calendar, Trump blasts former council CEOs on Twitter