BlackBerry hands out its Passport

BlackBerry is finally putting its new Passport large screen smart phone into the hands of buyers, after months of pre-release publicity.

Today’s unveiling of the $700 device (without a contract. Telus has it at $200 with a contract until Oct.1, when it goes up to $250) that has a bigger touch screen than the traditional handset with a keyboard is the first of BlackBerry’s big fall announcements. It will be followed by the release of the BlackBerry Classic (which unlike the Q-series handsets has a traditional trackpad) and BlackBerry Enterprise Service 12, the enterprise mobile device management platform the company is increasingly dependent on for revenue. 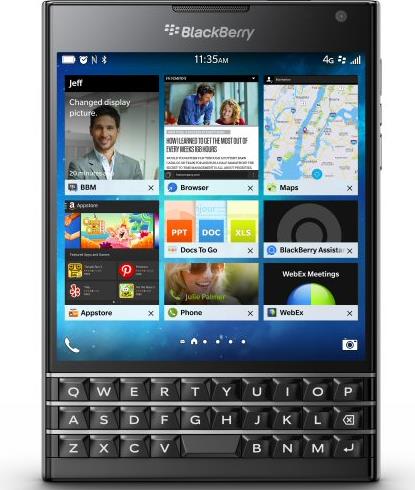 Today’s Globe and Mail details the behind the scenes struggle within the company over whether users actually want a handset of this size and width, with one calling it a “polarizing” design to executives.

Some, however, believe that a smart phone that doesn’t look like anyone else’s is exactly what the troubled company needs.

One unidentified company engineer told the paper that the Passport “had to be very different and cool and new and stand out.”

Different it is; cool is in the eye of the beholder.

“This is squarely aimed at the 30 per cent of the user base that likes a keyboard and long battery life,” CEO John Chen told reporters today in Toronto. “This device is packed with power.”

He admits people call it big, but once he shows people it’s the same size as a Canadian passport they feel differently. It’s the size that can fit in a gentleman’s pocket or a ladies purse, he said.

To endorse it he introduced “Canadian international hero” and long-time BlackBerry user Wayne Gretzky. “The great thing about the Passport is the battery life,” he said. BlackBerry [TSX: BB] says the battery can last up to 30 hours.

Jeff Gadway, head of product and brand marketing, told reporters the 4.5 in square screen allows users to read and write documents they often leave for PCs. The new iPhone 66 displays 30 characters per line (vertically) compared to the Passport’s 60 characters. To read a memo on an iPhone, he said a user has to magnify the text — and when the virtual keyboard is called up a large chunk of the document is obscured. Similarly, he said, a spreadsheet is easier to read on Passport’s wider screen.

The new three-line keyboard allows greater control and precision because it is “touch enabled”  — a user swipes on the keyboard, rather than the screen. Similarly, swiping up on the keyboard is used to select words suggested by the operating system when typing.

The new BB10.3 operating system that comes with the Passport has a refreshed interface and hundreds of new features. One is BlackBerry Assistant, a virtual assistant like Apple’s Siri and Google Now, but, Gadway said, unlike others Assistant can access data in secure work containers as well as personal data. In addition, for those trying to use Assistant during an office meeting when voice commands would be disruptive, it responds to typed commands with a typed answer. Similarly it can detect if the user has connected by Bluetooth and knows the user can’t look at the screen.

Other improvements are an improved speaker phone — 350 per cent louder than the Galaxy S5, the company boasts — as well as better frequency response for better performance in conference calls. It even boosts the volume and automatically adjusts it depending on how the Passport is held against an ear.

And to lure buyers from other platforms, there’s an app to help wirelessly move data and music from competitors’ devices.

The Passport has BlackBerry’s first quad-core CPU, which runs at 2.2 GHz, and comes with 4 GB of memory. Storage can be expanded with a microSD card. It even includes a new 13 MP camera with image stabilization.

Also new is BlackBerry Blend, an app that sends BBM messaging and content from a BlackBerry to a Windows, iOS, Mac or Android computer and tablet. It means instant notifications, messages, documents, calendars can be seen on any device. BlackBerry touts this as using its devices as a mobile network hub. If the BlackBerry is linked to BES then communications is secured, although details of the enterprise version have yet to be announced.

Howard Solomon
Currently a freelance writer, I'm the former editor of ITWorldCanada.com and Computing Canada. An IT journalist since 1997, I've written for several of ITWC's sister publications including ITBusiness.ca and Computer Dealer News. Before that I was a staff reporter at the Calgary Herald and the Brampton (Ont.) Daily Times. I can be reached at hsolomon [@] soloreporter.com
Previous articleNext-gen firewall tests highlight caution on evasion
Next articleNew WAN optimization solution promises to maximize bandwidth