Bell Mobility currently edges out all other carrier networks in terms of overall performance, speed and reliability, according to one mobile network research firm.

Industry organization RootMetrics collected and crowdsourced mobile network performance information, with more than 214,000 call, data, and text tests performed across more than 30,000 kilometres and in some 500 indoor locations. While scoring was close across all categories among Canada’s major network carriers — the big three operators (Bell, Rogers, and Telus) along with regional operators Videotron and Wind where available — the survey revealed that Bell led the way in factors such as speed and LTE reliability.

“Although we found strong performances from all three of the big Canadian operators, Bell earned the most RootScore Awards across our metro area testing. In Edmonton, Ottawa, Toronto, and Winnipeg, Bell especially stood out, tying for first across all six categories that we test,” the firm said in a statement. 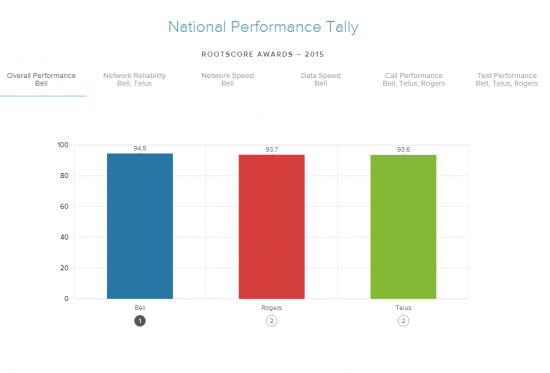 Highlights from the report include:

Rounding out the pack was Wind; with its slower network speeds and lack of LTE, the provider appears to be emphasizing value over speed and performance, noted the firm.