BARCELONA — As Mobile World Congress is dominated by a slew of smartphone announcements packed with manufacturers hyping up their new artificial intelligence-powered features, mobile network operators are opening their eyes to how AI could help solve some of their core business challenges, according to a new report from the GSMA.

In The Mobile Economy 2018 report released on Monday, GSMA Intelligence shows that 5G networks are nearing commercialization (starting next year) and that a growing majority of the world’s population will be connected to wireless networks (71 per cent by 2025). Also of note is how AI will make those networks more autonomous and intelligent. This could see mobile operators benefit from reduced costs in the near-term, and for their customers to enjoy lower hardware costs in the long-term, according to the report.

“AI can help both identify a problem and implement a solution based on a given framework,” the report states. “Operators are also working hard to improve customer service and reduce dependence on call centres, creating AI-driven assistants and chatbots to deal with customer issues.”

The new interest in using AI to grease internal wheels, as well as offer customers new services puts mobile operators in a strange position in the context of the AI marketplace. In some cases they are working hand-in-hand with technology firms building AI, and in other cases they might find themselves in direct competition.

This GSMA table breaks down the major U.S. tech firms that are developing AI and how they’re applying their IP: 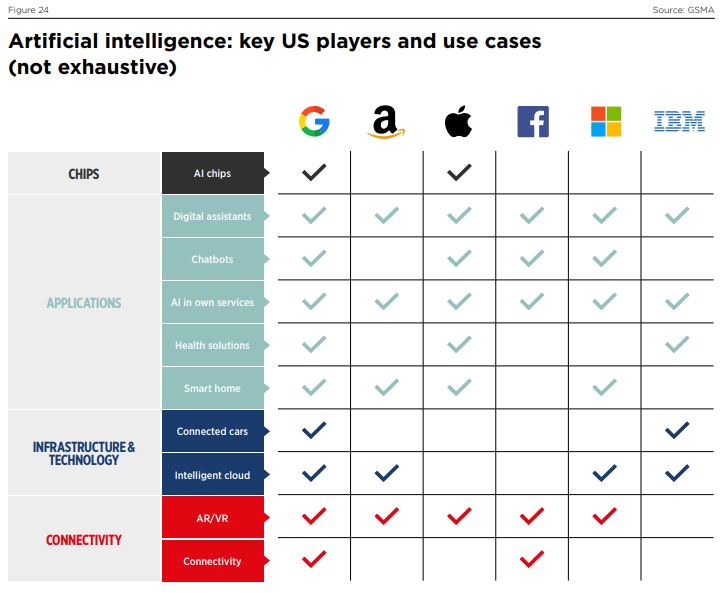 GSMA points to a couple of examples in Europe of how mobile operators are applying AI. First, there’s Telefonica, which launched its Aura platform in February 2017. It acts as an assistant that provides a supercharged self-service capability.

“Aura is a cognitive intelligence platform that sits on top of its network and other operational layers,” the report says. “Aura provides customers with much greater transparency and control over personal information, empowering them to perform tasks and access services (such as checking their data allowance), which ultimately simplifies the user experience.”

Then there’s Orange, which is preparing to launch its Django home assistant and smart speaker in the first half of 2018. It will compete with the likes of Amazon Echo devices and Google Home, providing control of smart home devices and access to entertainment and communications services.

Others, such as Canada’s Telus Mobility, are choosing to work with already established players like Amazon. Telus recently launched an Alexa Skill that allows its customers to make or receive calls and text messages using their Echo devices.

This just begins to show the ways that mobile operators will seek to harness AI and use it as a competitive advantage over the next few years. Some players are also moving to encourage more collaboration, with AT&T backing Project Acumos, an AI open-source initiative that aims to serve as a marketplace for AI applications.

IoT devices are the new Trojan horses. Here’s how to secure them

Telus signs deal with Samsung as a 5G provider

Nokia partners with Broadcom to diversify its chip supplier