5G is coming and will have broader use cases, greater impact on data centres

Even though LTE is still in the process of being deployed, there’s no doubt that 5G is coming, and unlike its predecessors, it will have a much greater impact on the IT industry.

In a recent webinar, The Coming Revolution: 5G and its Impact on IT, 451 Research analysts laid out how 5G is a much different animal.

“5G is grabbing the imagination of the industry,” Ken Rehbehn, principal analyst for mobile infrastructure.

And not just the telecommunications industry and mobile operators; other vertical industries, including medical and transportation, are starting to look at how 5G networks can be incorporated to solve problems that have been talked about for a while.

Rehbehn said radio technology has made a jump about every 10 years since analog cellular, which could be considered 1G. And although LTE deployment is still lagging some parts of the world, such as Europe, 5G is now on the horizon. “We’re at the point where the research community, vendors and operators need to factor in the changes that will occur during the next iteration of technology.”

He said 5G goes beyond just more bandwidth and more radio functionality; it’s defined by use cases that provide the capabilities that many industries and users have been expecting. There are two major groups of uses cases, said Rehbehn: broadband access and connecting things, such as Internet of Things (IoT) devices and vehicles. Other areas include “lifeline communications” in case of disaster and emergencies and broadcast-like services. Today’s LTE networks have constraints. “Some aspirations are a bit dreamy.”

For example, one vision for 5G is remote medical treatment that would see patients being operated on by a robot.

“I’m not so sure I want to be operated on by a robot,” said Rehbehn, but acknowledged there are many remote locations without adequate medical are that could benefit through diagnostics and consultations through 5G supported networks and technologies.

“As you break down use case families,” he said, “you see something quite striking: radically different requirements from use case to use case. Pervasive video values certain features over those required by sensor networks, for example. The question is whether one network architecture can handle all uses cases. 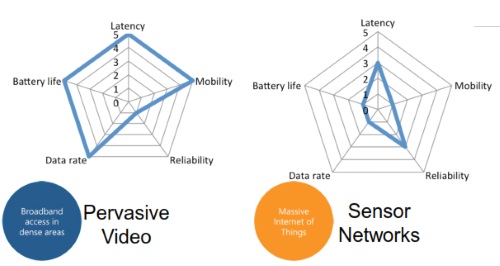 Flexibility is a key aspect of 5G, said Rehbehn, which is a lot more than radios. “It’s actually a systems issue.” Networks will need new architectures to work more effectively as a substantiation of the cloud and bring more computing to the network edge. “It will be interesting to see how the data centre evolves.”

In the meantime, the 5G starting line is a little blurred, he said. As LTE continues to evolve, selected elements of 5G will soon be incorporated into LTE networks in anticipation of a full-fledged 5G future.

Andy Lawrence, research vice-president for 451 Research’s Foresight project, which aims to provide insight into trends further into the future, said regardless of the vigorous debate about where 4G ends and 5G begins, content and media entertainment will be very important.

Some of the 5G scenarios he anticipates include smart stadiums, so that many devices can have low latency and high bandwidth to support immersive experiences at sports events, such as analytics and instant replays. “That’s the kind of the thing that might attract investment.”

Other areas are transportation, such as driverless cars and delivering critical data to onboard vehicle systems, smart cities, and healthcare, where a network can turn a human body into source of data. “You can become a machine that reports everything that’s going on.

“This is not just another G,” Lawrence emphasized; it represents a true merging of computing and communications and will become a catalyst for major developments in technology. “Clearly we’re going to see different industries that were not engaged in the IT industry become a critical part of it.”

Every area of IT will be affected, he added, including the data centre, while IoT and 5G are intertwined. “IT players needs to think about IoT now and 5G soon.”

According to a recent report from OpenSignal, worldwide deployment of LTE is moving quickly, and for its part, Canada is doing well. Some operators have pushed the upper boundaries of LTE speed, and coverage continues to expand to the point that in several countries 4G networks are now ubiquitous, although the pace of progress is occurring at different rates in different parts of the world.

In Canada, Rogers was the first Canadian carrier to launch LTE-Advanced wireless service to double download speeds more than a year ago. Bell upped its LTE speeds in August of last year, while Telus has said its LTE network now covers 95 per cent of the Canadian population as of late last year, a 10 per cent increase from the same period a year before.

There are already many ways LTE can be incorporated into an enterprise network. Next-generation WANs are incorporating high-speed LTE from multiple carriers as a parallel network that can be privately managed and segmented. Parallel networks that leverage LTE, rather than MPLS or Internet, might make sense for organizations that have specific types of devices that don’t need to be on the primary network. So far, most enterprises have used LTE as bandwidth on-demand.

Gary Hilson
Gary Hilson is a Toronto-based freelance writer who has written thousands of words for print and pixel in publications across North America. His areas of interest and expertise include software, enterprise and networking technology, memory systems, green energy, sustainable transportation, and research and education. His articles have been published by EE Times, SolarEnergy.Net, Network Computing, InformationWeek, Computing Canada, Computer Dealer News, Toronto Business Times and the Ottawa Citizen, among others.
Previous articleMicrosoft updates the Dynamics ERP suite on Azure cloud
Next articleYou’ll Drown by not fixing this vulnerability