If anyone personifies what the future CIO of major cities around the world might look like, City of Vancouver Chief Technology Officer Jessie Adcock is a good candidate.

She combines a business background with a deep knowledge of the public sector, she understands how to launch and land digital projects, also managing to make onerous enterprise infrastructure operations seem invisible to its users. She also pays attention to a metric that not many technology leaders might think to track – happiness.

“When you put data in the hands of people, you shorten decision making cycles, and when you shorten decision-making cycles, all sort of people in that entire ecosystem get happier,” she said on stage at ITWC’s Digital Transformation Awards in August. “I think that’s been the key, just demonstrating that the more you’re leveraging technology, the more you’re online, the more data you’re producing, and the faster the pace of change gets.”

It’s this customer-first focus that Adcock brings to the public sector and the success of a four-year plan to transform Vancouver into a smart city that put her in a finalist spot for 2018 CanadianCIO of the Year.

We interviewed Adcock at the Digital Transformation Awards for this episode of 5 Lessons from New Technology Leaders. We’re back for our second season, exploring the stories of some of our CanadianCIO of the Year finalists. This season will include some of the top technology executives from Canada’s oldest and most-recognized institutions and brands.

#1 – To be a true agent of change, you have to bring in an attitude that there’s a better way to do things.

As we heard in our introduction, Adcock is thinking about the happiness of stakeholders in the system – the people that deliver the services, sure, but mostly the people that receive them. It used to be the expectation that CIOs were focused on measuring data throughput speeds and other technical minutiae.

She also has a different approach to the civil service than many in the public realm might.

“So when I made the transition from working for a global company to working for a municipality, I got a crash course in bureaucracy,” she said. “It’s just the Canadian way, we’re extremely deliberate, we’re extremely educated, we think about our decisions, we think about all our risks, it kind of stifles the fire in your belly a little bit because we are so carefully constructed all the time. Our government, you know, governments need to create an environment that’s a little bit less bureaucratic.”

That’s right – the government should be less bureaucratic, says an internal government manager. It just goes to show you need to bring in an outside perspective to find a better way to do things.

#2 – The public CIO of the future has a blended IT and business background married with a commitment to making citizens happy with the power of technology.

Prior to joining the City of Vancouver in 2013, Adcock worked in the private sector for years, including several manager positions with bank HSBC.  When she was hired by the municipality, she first started as Vancouver’s chief digital officer, the first person to hold such a role in the public sector in Canada.

Adcock had to take a website that was a glorified notice board and turn it into a modern digital service channel. In the era of Netflix and Amazon, she knew expectations for this would be high among citizens.

When the city found itself looking for a new CIO, it turned to Adcock to take on that role as well. Now under the office of the CTO, she’d manage both the CIO and digital portfolios. It was a natural progression, Adcock says.

“Our digital channels came up with a service delivery approach that enhanced engagement and improved access,” she says. “The city has a role to play in this, with a thriving tech ecosystem to lead the charge on digital transformation.”

Even the definition of city infrastructure is up for adaption when you have a digital-first leader. Adcock says that it’s not just about pipes, roads, and sewers anymore, but the “invisible infrastructure” of IT enabling the future. Where the city builders of the 20th century built our physical infrastructure, those of the 21st century will focus on connecting digital services.

#3 – Business disruption isn’t contained in one sector. If a way of doing things proves to have advantages in one area, it’s only a matter of time until it’s adapted to another.

Adcock’s private sector career path included time working with telecoms before she worked in the banking sector. Working in the era when the web was transforming consumer behaviour, she saw it affect both sectors. When she was working in banking, she pushed the digital agenda, but there was resistence along the way.

“There were still a lot of skeptics who din’t believe poeple are going to adopt ‘this online banking stuff,'” she recalls. “But over the course of that decade at the bank, every service eventually moved online and that became the channel of choice.”

Adcock saw the same trend unfold in multiple sectors in her career, so by the time she got to the public sector with Vancouver, she knew it was time for the digital wave to swell there. She set to work breaking down the silos separating IT systems that prevented services being delivered directly to consumers via the web right away.

#4 -You’re not following a strategy unless you’re measuring progress towards clear goals. Even if you’re way behind, defining metrics and paying attention to them will help you advance your organization.

When Adcock started with the city, she inherited a strategy determined by an outside consulting firm. The firm evaluated the city in areas such as data maturity, online service delivery, mobile service availability, and infrastructure. It also compared its “smart city” profile to other leaders around the world, such as Boston. The report card wasn’t great, Vancouver was just a sophmore in terms of its progress towards being a world-class smart city.

But Adcock was handed a plan to deliver on, one with 15 prioority initiatives divided into four key pillars:

While Adcock had the strategy, she wasn’t told how to measure it. She determined what she would measure in order to reach the vision set ahead of her.

“As far as metrics go, we went form zero metrics to a very data-fluent culture,” she says. “You’re going from ‘I don’t know who’s coming to my website to being able to identify the journeys in a path tracking view and having advanced analytics applied throughout your website.”

Adcock started tracking every online commercial transaction, and identified the metrics her staff would use to understand the success of their business.

#5 – Keep iterating towards the best experience for your customers.

In 2012, the City of Vancouver ranked behind other major cities across North America in several areas. Here’s the assessment the consultant group performed, rating Vancouver against other municipalities: 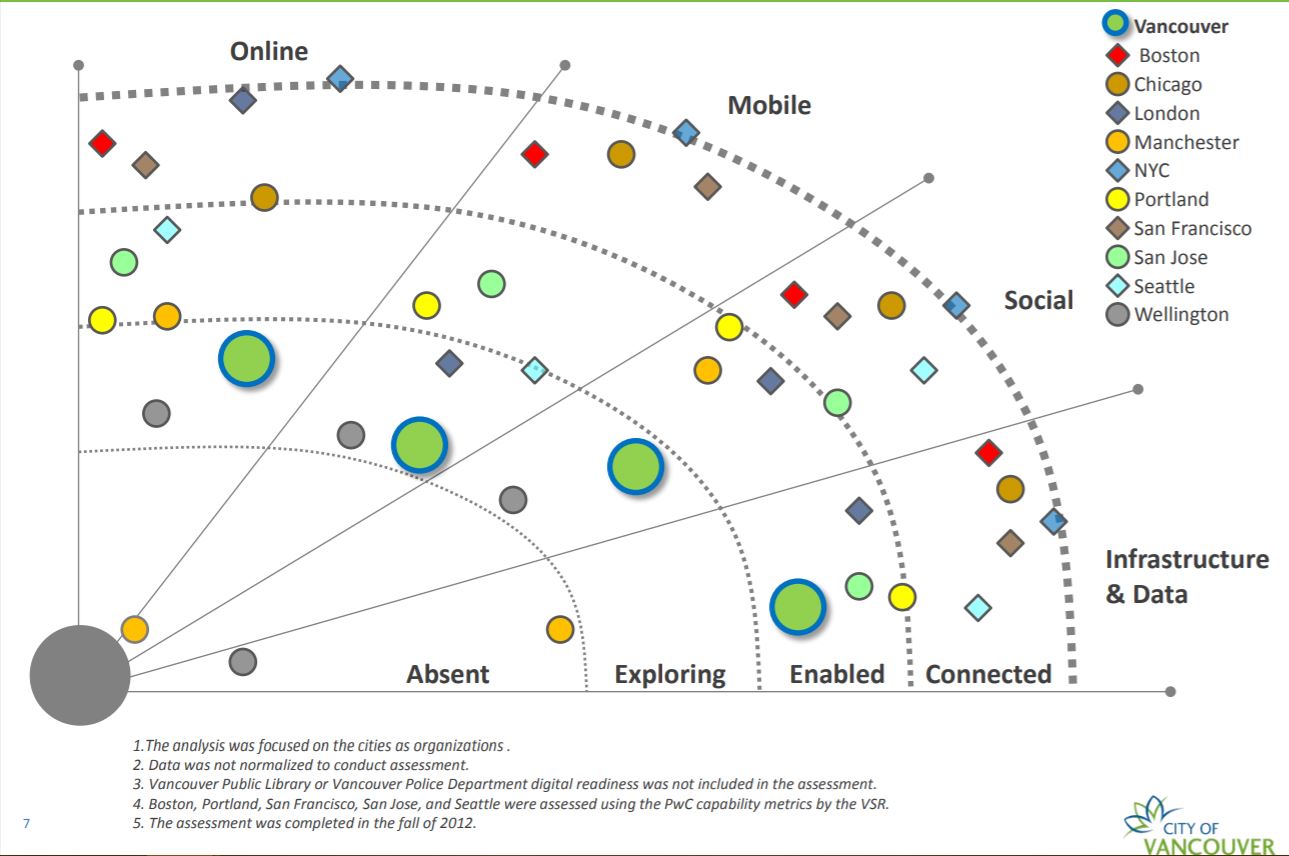 Over four years of pursuing its 15 priorities, Adcock made great strides in transforming the city’s capabilities. Today it’s pointed to as a model by other cities embarking on their own smart city strategy. The city even offers its residents free Wi-Fi across 600 locations. Thanks to the help of partner Shaw Communications Inc. the #VanWiFi network is used daily by people living in Vancouver and visiting it. Even Adcock’s own guests enjoy it.

“I had family in from Spain last week and they were just raving about #VanWiFi, without even knowing I had anything to do with it,” she says. “It’s the largest public Wi-Fi network in Canada and third-largest in North America. It changes things because now people can go to the park, or the pool, or the community centre and they can use it.”

Adcock’s not stopping there either. Together with neighbour city Surrey, she’s a finalist for Canada’s Smart Cities Challenge in the $50 million category. In the Spring, they’ll find out if they win the big prize. If they do, they’ll set about building Canada’s first two collision-free, multi-modal transportation corridors.

The four year plan may be complete. But the future beckons.