When Samsung Electronics Co. Ltd. and BlackBerry Ltd. announced they were teaming up to provide an enterprise security solution in November, it caught some analysts and customers by surprise.

It seems like an unlikely alliance for these two competitors. BlackBerry’s John Sims likened executives to “awkward teenagers at the school dance” when they first broached the idea during meetings at Mobile World Congress in Barcelona, according to a story in the Globe and Mail.

Despite that, the two tech companies hammered out negotiations in a matter of a few months. The partnership is now officially here to stay, and both Samsung and BlackBerry customers stand to gain.

IT World Canada held a webinar on Wednesday, with experts from the two companies presenting the advantages of using a secure system powered by both Samsung’s Knox security solutions and BlackBerry’s BlackBerry Enterprise Server (BES)12 for enterprise mobility management (EMM).

As part of their presentation, they polled webinar attendees to find out how organizations are faring with their EMM policies. They found most attendees have at least a bring-your-own-device policy in place at work, with many also reporting they have corporate devices where personal data and work-related documents are kept separate. 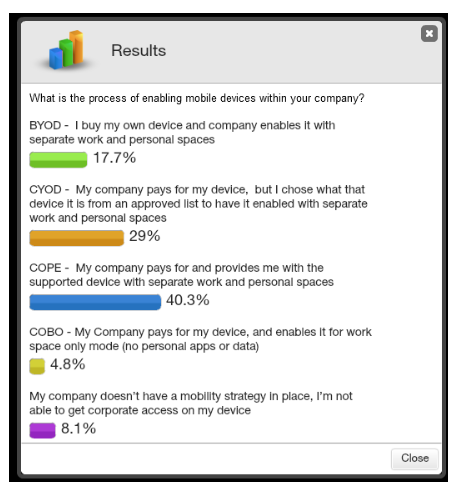 That was the good news – so what about the bad? In another poll, about 23.2 per cent of attendees said they don’t have any formal EMM strategy in place – and among the respondents who did, another 23.2 per cent said they rely on direct ActiveSync, without any other EMM or mobile device management (MDM) platform. That was a worrying sign for Nick Dawson, director of the Knox business group at Samsung and one of the webinar experts. 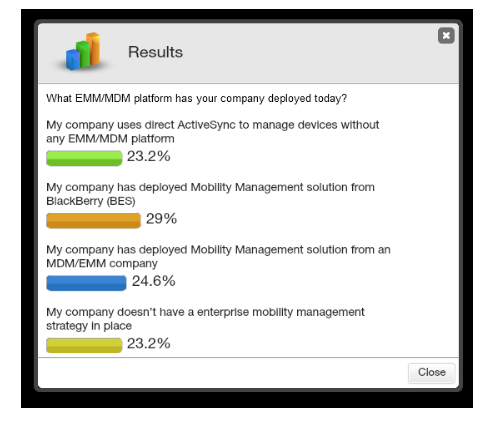 “I’m very concerned … where they don’t have a strategy in place at all. Also surprised at people using ActiveSync only. I mean, Active Sync is a wonderful protocol, it’s a great multi-device communication protocol, but it really inherently doesn’t provide any security in and of itself. I think that’s something people need to be aware of,” Dawson said. “[People] may have this feeling that they’re operating in a secure environment, whereas in fact, not necessarily.”

However, he noted about 29 per cent of respondents work at companies that use BES to protect their mobile devices.
“When we look at what the marketplace terms the MDM market … we actually certainly do still see BES as the dominant player in that market by a wide, wide margin globally still, certainly in regulated industries and enterprises, such as government, financial services, and healthcare,” said Dawson.

Mohammed Ahmed, product marketing manager at BlackBerry, shared Dawson’s concern about the lack of EMM and MDM strategies, as well as the over-reliance on ActiveSync. He added BlackBerry has been hearing a lot from customers who also use ActiveSync, but that his company also received calls from those same customers asking how they can control a flood of devices connecting to their corporate email and accessing important documents.

“I think it’s great to have that base-level integration for the messaging platform. ActiveSync is really good at that,” Ahmed said. “But what is really needed is above and beyond that. A smartphone connected to your corporate network, lost on the subway or at a bar, is essentially a gateway to everything inside your organization.”

That’s where BlackBerry and Samsung can help, owing to the united front they’re now presenting to their customers. While BES12 already supports iOS, Android, Windows, and BlackBerry, Samsung Knox will soon get added to that portfolio.

That means customers will get a “full end-to-end deployment solution for all deployment models,” Ahmed said. He added that BES12 and Knox will provide a comprehensive EMM solution, a unified administrative console for all corporate data across devices and applications, integrated security for data in transit, and ways of providing privacy to employees using all types of devices.

But most importantly, customers will get both choice and security bundled together, Dawson said. With a BES12+Knox license, IT departments can allow users to pick their own devices, whether they come from BlackBerry or Samsung, yet still benefit from all of the security features both companies have to offer.

Ultimately, BlackBerry and Samsung customers are the winners of this partnership, as they won’t be as constrained in choosing the devices they really want, he added.

“You guys will go out, and you will buy your [Samsung] Galaxy S5, or your Note 4, or your BlackBerry Passport, or the BlackBerry Classic that just launched this morning, and you will get whatever device you need,” Dawson said.

To find out more about the BES12 and Knox partnership, interested customers can talk to BlackBerry or an authorized BlackBerry reseller. Pricing for a BES12 and Knox license will be announced once the product becomes available.