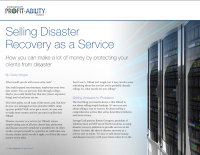 Selling Disaster Recovery as a Service 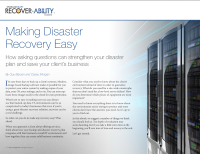 With the cost of enterprise downtime estimated at a staggering $100,000-plus per hour, businesses have to be back on their feet in the shortest possible time regardless of what caused the incident. The key to business continuity is a solid backup and disaster recovery (BDR) solution.

CPI – a partner with StorageCraft, handles IT for companies in Los Angeles, San Bernardino and Ventura counties in California, a total of 4,000 servers and desktops. Recently, a number of customers reported they were victims of ransomware attacks.

Ransomware finds its way into a company’s systems, typically through a phishing attack or download from a scam Web site. It then worms its way through the company’s servers, encrypting the data so it can’t be used. The criminals behind the attack then demand payment for a key to unencrypt the data. By some estimates, ransomware collects as much as $30 million a year.

Ten CPI customers became infected with ransomware. The first, a property management company with three locations, had its servers encrypted, locking down its sensitive data, including financial information dating back several years.

Using StorageCraft ShadowProtect, CPI technicians were able to restore the servers from a recent backup image in only two hours, thus avoiding having to retrieve the data from the hacker—a risky proposition at best as who knows if the hacker would co-operate at all once the ransom is received.

For more on information on how this ransomware situation was mitigated, download this case study. In it, you will also learn how CPI Solutions managed a widespread outage among its customer base, bringing servers back online in minimal time.