It’s been a turbulent year for miners, with metal prices starting near multi-year lows as executives drew from a common playbook: slashing spending, costs and debt. Then came Brexit and the U.S. election and gold and base metals diverged.

What does 2017 hold? Industry analysts like Bloomberg have asked the heads of some of the biggest producers including Barrick Gold Corp., Newmont Mining Corp. and Teck Resources Ltd. Opinions vary, but there’s broad agreement that gold faces near-term headwinds from the Fed; that industrial metals have bottomed out but the dizzying 2016 rally may falter; and that miners will begin to spend more, possibly on deals, while keeping an eye on balance sheets. 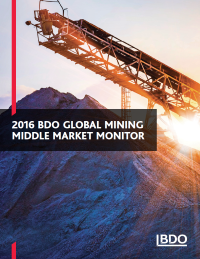 2016 BDO Global Mining Middle Market Monitor
The mining sector has witnessed its share of financial blows – but history doesn’t have to repeat itself. Middle market mining companies must embrace innovation and creativity if they want to weather the bumpy road ahead.
Download Now

So where does one turn in a market turbulence and currency turf wars? To survive and thrive, mining companies need to work smarter not harder and use digital technology like autonomous vehicles, IoT, Big Data, Analytics, remote control centers, predictive maintenance and wearable technology.

In speaking with Rishan Lye, from BDO Canada LLP, he feels we are on the cusp of some real breakthroughs with machine learning and predictive analytics. He feels that mining companies should fully embrace all the new technologies that are coming down the pipe from leading platforms like Microsoft. In his opinion areas of concentration for a digital transformation should be focused on specific lines of business like:  Mine operations, Plant operations, Maintenance and Geology.

Lye stated that, “many of the advanced analytics ideas are not new. IoT for example is just a new buzz word. What was really lacking was the massive computing power to crunch all that raw data” Many clients that he has worked with over the last ten years were pulling analytics from core mining systems but lacked the big IT budgets needed to start layering data on top of data.  But most of the information was historic vs predictive and lacked true insights before they were going to happen.

The time to act is now says Sean Bredin, National Lead for BDO Mining. Canada’s leading mining companies from Vancouver to Halifax, are using data and analytics at a rapid pace. This adoption is already shaking up multiple industries, and the effects will only become more pronounced as adoption reaches critical mass—and as machines gain unprecedented capabilities to solve problems and understand language.” Mining and Metals organizations who harness these capabilities effectively will be able to create significant value and differentiate themselves, while others who do not make the shift will find themselves increasingly at a disadvantage as uncertainty on almost every front has now become the new norm.

As we have seen with BDOs mining and metals clients, Bredin stresses, “the need for digital transformation, new ways of innovating, more integrated IT and operational technology, cyber security, and the rethinking of corporate collaboration should all top priorities for Miners in 2017 as they look to harness the power of new digital platforms from Microsoft, OsiSoft, and IoT players like CISCO. Bredin went on to say that mining companies don’t need to fear being the early adopter. There is no need to think of yourself as the guinea pig anymore. If there is not someone in your industry doing what you want to do with big data right now, look to another industry and learn from their approach. The inner workings of how your business operates might be unique, but typically the adoption of analytics can be cross pollinated from one industry to the next.

In reviewing IDC’s recent Mining Predictions report http://www.idc.com/getdoc.jsp?containerId=US40127516 the BDO Mining Technology team sees a number of commonalities that were being slotted for upcoming IT budgets in Q4 of 2016. According to Bredin, “as budgets were being finalized just before Christmas, we had the chance to talk to a number of our long standing clients about what was on the radar for 2017-2020. Not surprisingly, a good number of the below predictions are being adopted by a good number of our global mining clients. IT spending in Mining is taking on a new resurgence not seen at this pace since 2009 and many of the new ideas are leveraging digital platforms and advanced analytics.”

Predictions to pay attention too – Not necessarily in order:

Prediction: By 2017, 20% of miners will achieve operational excellence through manufacturization of mining — implementing lean approaches and standardizing ERP and operational software integration.

Prediction: By 2018, 40% of mining companies will boost efficiency by 25% by rationalizing operational software that’s applied within operational functions.

Prediction: By 2019, the drive for innovation will triple the number of mining-focused IT start-ups engaged with mining companies.

Prediction: By 2018, innovation accelerators will create a digital operating environment for 30% of mining companies, fundamentally transforming the nature of work within mining operations.

Prediction: In 2017, investments in mobile connectivity, security, and cloud by 70% of mining companies will lay the foundation for the digital mine.

Wherever your commodity is headed in 2017, technology is changing the business case for the transformation that mining companies need to be making — remaking the connection between innovation and digital mining operations. Mining companies need to find new ways to run their operations — technology will be a part of this, but the transformation will require relooking at the interconnections, processes, and structure across the systems. It will take a balance of people, process and technology along with some strong leadership from a trusted Partner. Take the leap and don’t look back. In a few short years mining companies will be cutting edge just like Banks and Telco’s.