Smart phones are a boon to the busy business user, with cellular connectivity and big screens enabling some executives to claim all their work can be done on the devices.

But some applications need a little help inputting information. Samsung Electronics has been aiming its Galaxy Note handsets at those who want a digital pen for scribbling notes.

As detailed by ITportal.com, they’re close to the same size — the Edge has a 5.6-in screen, the Note’s is 5.7-in. But the Edge has slightly more pixel density. What makes the Edge different is the screen extends literally to the edge of the device — a bar that runs up the side of the handset that can show email notifications or other icons. 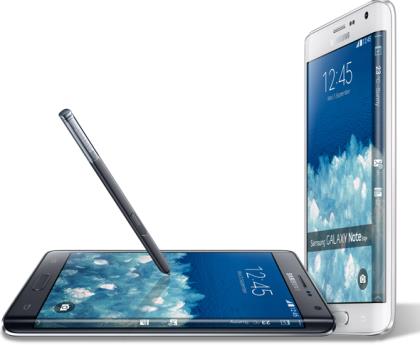 Also, as expected from a device with a smaller screen, the Edge is slightly shorter. But it’s also thinner than the Note 4 and 24g lighter, which will be a decisive factor for those for whom weight is a premium.

The site also has a hands-on review of the Note 4 here. It will launch in the U.S. in October.

In a briefing for South Korean reporters, a Samsung executive said the Note Edge has a concave metal edge on the right side. The hand set is weighted so if a user drops it — Editor’s note: never happens, right? — it will hit the metal frame first.