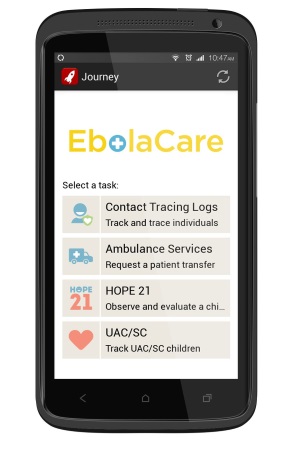 “There’s an app for that,” has become a bit of a joke and a cliche these days. Two brothers from South Africa hope their app will do at least a small bit to help fight Ebola.

As detailed by Larry Magid on Forbes.com, Philip and Malan Joubert have created the Ebola Care App to help aid agencies co-ordinate efforts of health workers and collect data usually assembled on paper.

Medical information gathered from ambulance staff, details of the location of patients, data on children under quarantine and on those abandoned by their parents is entered on smart phones — usually low-end Android phones — and the data is almost immediately available online for decision makers.

If there is no wireless signal the data is stored in a mobile relational database until there is. Then the data is securely uploaded to the cloud, where it can be accessed by approved agencies.

The app, which has some 40 screens and developed on a platform created by the brothers, has been designed to work well on low-end Android phones, which make up the vast bulk of smartphones in West Africa.

While the app is free, field workers need handsets, so the Jouberts, who currently live in Silicon Valley, are doing some fundraising. Which isn’t the point of this report. It’s that there’s a need for apps everywhere.