A Canadian software company achieves software and services revenue of $162 million last quarter, up 183 per cent year-over-year and up 119 per cent quarter-over-quarter.

News? Absolutely. Everyone would want to know about that.

So why was it a surprise when Margaret Stuart, vice-president, global sales programs at BlackBerry Ltd. announced that if you consider the software company within BlackBerry, that’s exactly what you’d see?

Because that was precisely the message BlackBerry delivered in two recent breakfast sessions conducted in partnership with our security publication, CSO Digital, earlier this month. Titled The Perfect Pairing: Mobile Collaboration & Security, the sessions in both Calgary and Toronto featured more than 45 attendees who saw BlackBerry present a new view of the company – not as a hardware device maker, but as an end-to-end secure mobile content application and management software platform.

The overarching theme of the session was “Collaboration is the Future,” and how the transformation of work today is equally about mobile, collaboration tools, and the cloud. It’s a compelling story – and throughout the sessions, we heard participants say, “I didn’t know BlackBerry could do that.”

Even for those who have followed the BlackBerry story closely – and in particular the bold way in which CEO John Chen has led a turnaround at the company – there was much to learn.

Enterprise Mobility Management: Open for All Devices and OS

Even among those who have had some experience with BlackBerry, the mobile management story is lesser known. Yet for those in the know, BlackBerry has long been identified as much for its BlackBerry Enterprise Server (BES) mobile management software as for its handsets. BES has been a key part of every BlackBerry client for many years, and widely regarded as a secure platform from which to manage the inventory of BlackBerry devices for a company.

What even the experts might not realize are the advances that BlackBerry has made in opening up the BES platform. Today the BES (version 12) is one of the leading Enterprise Mobility Management (EMM) systems, managing all types of devices, iOS, Android, BlackBerry 10, Windows 10 and Mac OS X. This integration system handles the complexities of different devices, platforms, operating systems and approaches. In the Android world for example, there are multiple approaches to containerization – the ability to segregate user data from corporate data and securely manage these on a single device. Samsung has one approach to this with their “Knox” offering. Google’s new “Android for Work” has a different approach. BlackBerry themselves have a containerization approach through their acquisition of Good Technology. BES 12 handles all of these, within their new, agnostic, open approach. This type of deep integration and openness has transformed BES from a great BlackBerry management software to a true Enterprise Management software for mobility.

Further, the depth and breadth of the integration give credibility BlackBerry’s idea of providing secure management for all devices in the emerging Internet of Things (IoT). Their work in the automotive sector is timely, especially given the new concern for automotive security stemming from last year’s Wired article which presented a Jeep being hacked on the highway with the writer in the car. But the automotive sector is only one segment of the new market which will involve billions of connected devices and equally, for the enterprise network manager, an equal amount of potential vulnerability points.

Clearly BlackBerry has made some inroads into the secure mobile management arena. But that’s just the foundation of the new BlackBerry as a solutions company. Although BlackBerry did indeed cope with the disruption of its handset business, it had a key asset that many businesses in a similar position did not – a large cash reserve which is currently estimated at $2.7 billion.

At the start of the Toronto and Calgary sessions, BlackBerry’s Stuart presented an ambitious vision, showing the evolution from secure messaging to full collaboration. It’s a maturity model that most CIOs would embrace – and, from the participant reaction, one that few companies have really advanced beyond the early stages.

As an aspirational view, it would have been very interesting. What made it even more compelling was the fact that BlackBerry has, over the past 18 months, made a number of strategic acquisitions of companies to bring that vision to life. As a further tribute to John Chen’s masterful deal making, each of these companies has a strong reputation in their area. 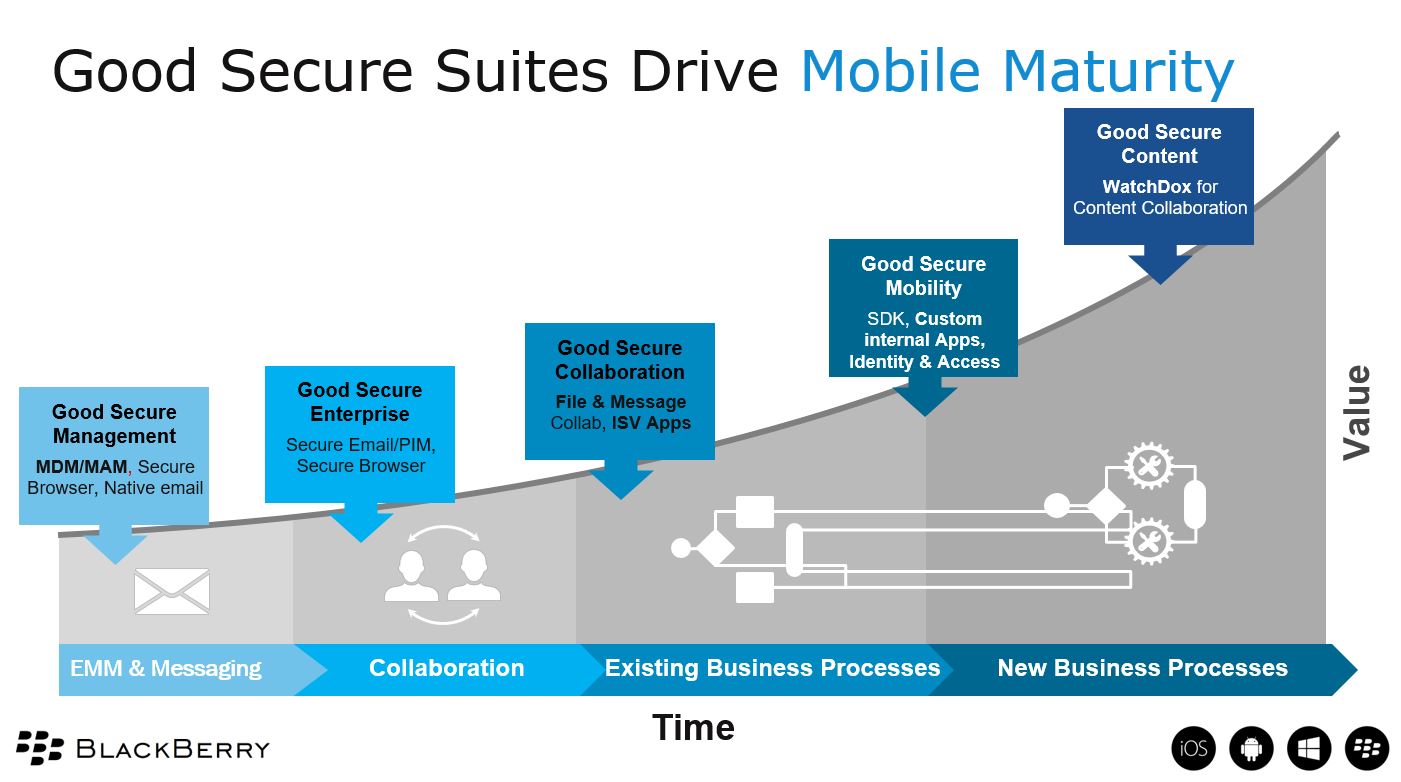 BlackBerry’s most recent addition provides their own secure containerization model. For BlackBerry, containerization for is not just about segmenting and securing work data, it’s also about optimizing the business experience integrating tools and services in a seamless work flow for the user. And containerization is at the root of solving the main issue in Bring-your-own-device (BYOD) approach to mobile devices in the workplace – how do we securely manage a device when it mixes personal and business use?

We know that the alternative, having two devices – one personal and one for business – is largely unacceptable in the modern working world, where a mobile device is also a personal statement. In some other cases, it’s also totally impractical; Stuart gave an example of a physician working at several different hospitals who was forced to carry and answer four separate mobile phones.

The answer to this quandary is containerization. Using this strategy, the business and personal aspects of the device are managed separately. Why is this so important? While we might think that the corporate information on a cellphone has incredible value, we can quickly discover that value, like beauty, is in the eye of the beholder. Telling an employee that wiping their device will also erase their precious personal data could cause a major meltdown that most administrators would dearly like to avoid.

With containerization, if a device is suspected as lost or stolen, for example, or if an employee simply leaves the company and wants to retain their device, the business “container” can be wiped separately, leaving the personal data intact.

That’s the basic level of containerization. There are more complex levels and approaches. Going beyond simply isolating data and applications, there are issues of control such as preventing cutting and pasting of secure documents, or preventing screen printing. Another high level challenge of containerization is in providing containers for legacy systems. But maybe more important than these two is the user experience; we all know that no matter how well protected a device may be, if it makes the device difficult or frustrating for the employee to use, they will find a way around almost any security. So there is a huge struggle to make containerization not only secure, but user friendly.

BlackBerry’s acquisition of Good Technology allows it to support other container strategies from different vendors, but to also maintain its own unique approaches. It can be perceived as open but still pursue its own unique differentiator.

When Sony was hacked in late 2014, although the email hacking was tremendously damaging, one thing remained secure – the scripts for Sony’s various entertainment properties. That revelation during the BlackBerry presentation served as the introduction to WatchDox, BlackBerry’s secure document protection software. As its name implies, WatchDox protects at the document level, allowing a central administrator to grant and, more importantly, revoke access to documents even once they are distributed widely.

An example given was of a potential merger of companies, during which a large number of documents were released under non-disclosure agreements. When the two companies hit a bump in their negotiations, WatchDox allowed one company to close access to all of its documents – and receive a notification when the other company tried to access them.

If WatchDox works as well in everyday use as it had in the examples we were given, it solves a major issue in secure mobile collaboration – how do we ensure that documents accessed on our mobile networks are not shared and accessed by non-authorized persons?

One of the key pieces of the recent two city tour was a two-way collaboration between BlackBerry and the attendees, facilitated by myself. We asked the group to talk about three components of their own secure mobile collaboration experience: First, the benefits that they were looking for; second, the barriers that prevented them from realizing those benefits; and third, we asked them to brag about any of their corporate successes.

That last point – finding something to brag about – gave participants the most trouble. Despite all of the work and effort they had clearly invested, there were few examples of real successes. For example in Calgary, where Calgary Police Service (CPS) superintendent Guy Slater kept the audience riveted with his description of how the force was working to implement a true secure mobile collaboration platform, Slater admitted that he was only beginning to really explore where this new development would go.

One reason that the participants may not have found enough benefits to brag about was the lack of exciting use cases. Although our discussions were engaging, most of the participants struggled to articulate the benefits of mobile collaboration. There were some use cases – ranging from avoiding site visits to engaging the end customer – but for the most part the discussion revolved around mobility itself as a benefit: the ability to work anyplace, anywhere.

Where the participants were clear, however, was on the subject of barriers. Culture, adoption, differing user requirements, difficulty understanding user needs – and above all – security.

There were a raft of barriers and obstacles matched by a dearth of use cases. And this is the central challenge of those who want to take leadership in this area. While we all understand the barriers, we have a less-than-clear idea of the benefits. To truly excel in this arena is going to take more than technical excellence. It will take vision. As Henry Ford said, and one of our participants echoed, “if I gave the consumer what he was looking for, I would have given them faster horses.”

Having the imagination to take the general needs and roll these out into a vision that amazes and engages a customer base that is sophisticated, diverse and demanding is a real challenge that will face the next leaders in enterprise mobility.

Jim Love is the CIO and Chief Content Officer for ITWC