First, some history. For the past decade and a half, Citrix and then VMWare have promised to deliver virtual desktop

seamlessly and efficiently to the corporate user. Maintenance and patching could be done on images on the server side, and when a user logged in, they would receive the updates.  Beautiful!

Citrix first called it WinFrame, then Metaframe Presentation Server, then finally XenApp.  Anyways, it is server based computing, and they had the market share in virtual desktops and application streaming for the better part of the late 90s through mid 2000s. They used a proprietary protocol called ICA or Independent Computing Architecture to deliver applications or complete desktops to an end user.

This “thin computing“ as it was called could be delivered to a smart terminal or any of the existing desktop platforms of the time, whether it be Windows, MAC OSX, or UNIX/Linux.  It was going to greatly reduce the cost of the desktop through reductions in hardware requirements and maintenance.

VMware was working on a very robust server virtualization at the same time, and did not bring a desktop virtualization product to market until significantly later than Citrix. Their first product was called VMWare VDM (Virtual Desktop Manager).  This was later branded VMWare View, then recently VMWare Horizon View.

Citrix positioned itself on a mantra it called MAPS:
Management, Access, Performance, and Security.

Through centralizing the desktop images and applications, Management became infinitely easier.   You didn’t have to install, patch, or maintain operating systems or applications on a myriad of desktops.  You managed them locally on the server, and an end user would get the update when they logged back in.

Access meant that just about every desktop platform used at the time had the ability to render Citrix presentations.  As long as they had adequate video capabilities, a keyboard, mouse, and network connectivity, it was likely that they could run Citrix ICA.

Performance was achieved for many applications that required constant backed or file share access.  Two-tiered applications where the desktop application connected to a database or file share on the back end could be placed close to that back end and latency was practically removed.

Security was achieved through several artifacts of the technology.  Firstly, your data never left the data center.  Merely a video representation of it in the form of an ICA session was made available to your monitor. Secondly patching was done on the image files on the server, and were inherently available the next time the user logged in.  Antivirus could be done from the backend, scanning all of the running guest images simultaneously.  Updates would be immediate, and complete.

So how come uptake is now less than stellar?

Today, there is little delta in cost between a smart terminal and a low end Intel/AMD based PC.  Without the cost incentive, adoption has slowed.

Another entire tier of infrastructure is required to satisfy a typical VDI solution. High end multi-core server clusters with hundreds of gigabytes of memory are required to host these remote sessions.

Offline is not an option.  In a typical VDI infrastructure, when your network saturates or becomes disconnected, your entire farm is unavailable.  All workstations cease to work.

And most importantly, today’s applications are media rich.  High end graphics and audio processors are the norm on the average desktop purchased, but the server based computing model still fails to deliver on the performance requirements in this area.

So? What’s this upside down VDI thing you started with?

In 2006, Citrix acquired a company/technology called Ardence.  Ardence basically stood up generic workstation boot images and user profile drives, and provisioned them through PXE boot to your workstations. You got the benefits of secure patching and antivirus every time you booted, and if there were hiccups in the network, you were still operational. And the image ran locally on your desktop hardware.  No huge back end server infrastructure other than the provisioning box, and you could manage all the media performance locally!

Citrix has since rebranded this as Citrix Provisioning Services and focused it more on provision virtual images for its core line of business, the XenApp services as opposed to physical workstations.

Now, if you follow VDI or Citrix in general, the name Brian Madden is etched into your very optic nerves. He is the defacto guru of anything resembling virtualized desktop.

In early October, he issued the following article:  Brian Madden: Remember how Ardence was awesome before Citrix screwed it up? You need to know about Jentu: Disk streaming to physical desktops

Jentu is a Canadian Company, out of Toronto Ontario. 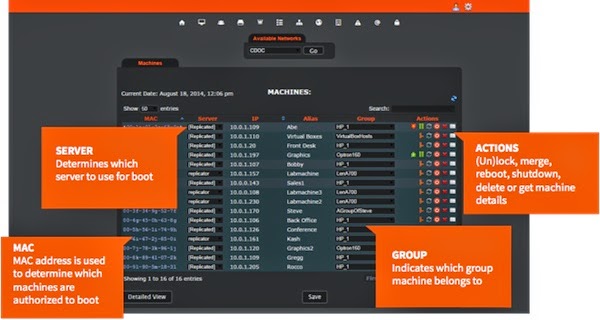 Even though the company name is relatively new, Jentu has been around in one form or another for over a decade.  Jentu introduced their diskless workstation provisioning architecture several years ago as a means to support multiple workstations at their remote customer sites.  Rather than remotely accessing and managing individual workstations on a remote network, they came up with a scheme that would manage virtual disk images on a file server.  These images would be maintained for patching and anti-malware.  Typical office applications would be applied  to the image and maintained as well.  User profiles and data, as well as host hardware profiles would be stored on a separate volume on the network.

When a user rebooted their workstation, a PXE boot (network boot) would connect the workstation (based on MAC address) to the correct boot image, and stream that image via secured iSCSI to the workstation.  User log on would then pull down their personal profile for desktop, etc via group policy in Active Directory.

From that point on, the user is running live on their own physical workstation with all the benefits of the hardware on their desk.

Remember that MAPS acronym from Citrix?

Jentu is batting 4 for 4 on this.  Management is still centralized. Access to images is local to the provisioning server. Performance is determined by the individual desktop hardware used, and the network connectivity provisioned.  Security is ensured through encrypted iSCSCI, as well as security and patch management of centralized images.

If you haven’t heard of Jentu, I suggest you go check them out now.  You’ll definitely be hearing more of them in the future.