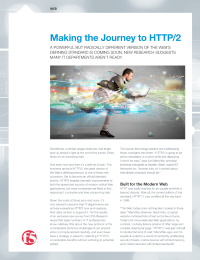 Making the Journey to HTTP/2

Sometimes, a familiar adage observes, that bright spot up ahead is light at the end of the tunnel. Other times it’s an onrushing train.

And every now and then it’s a little bit of both. the imminent arrival of HTTP/2, the latest version of the Web’s defining protocol, is one of those rare occasions.
Set to become an official standard shortly, HTTP/2 enables dramatic improvements to both the speed and security of mission-critical Web applications, but most companies are likely to find deploying it a complex and time-consuming task.