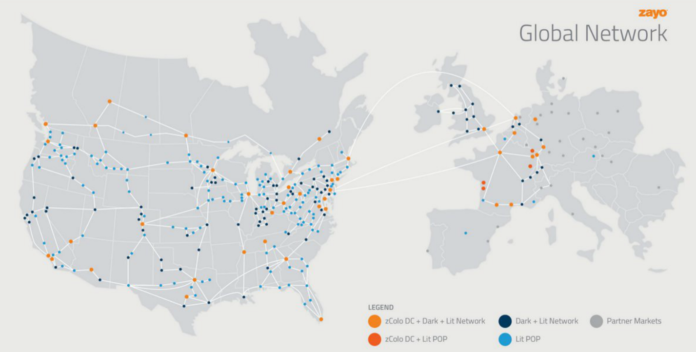 Zayo is no stranger to acquisitions, with 36 under its belt since its foundation in 2007. On the company’s website, one of the main mission statements is to acquire a global network of fibre network. That’s where the Zayo Canada business will focus, delivering broadband connectivity to its clients, as well as colocation services from Allstream’s colocation services.

Zayo Canada will look similar to other overseas business units created, such as Zayo UK and Zayo France.

“The biggest reason we did this is the resulting business will be consistent with our core strategy,” Caruso

said. “We’re taking on a little bit of extra work this time to separate these businesses to help unleash the value, but we think that’s a pretty small price to pay for the underlying value we’re getting.”

“We will run them as if we will own them forever, that is fundamental to our belief system,” he says. “There should not be an expectation that we’re going to turn around and sell any portion of the business.”

Zayo expects that the acquisition will close by the first quarter of 2016 and it will be operating the Zayo Canada unit at that time.

In an interview with Bloomberg TV Canada, MTS CEO Jay Forbes said that offers were considered from Canadian competitors for the sale of Allstream. But the $465 million offer from Zayo won the day.

Negotiating the deal as a federal election was taking place, Forbes says that a plan was made to envision the change in government after the election. Also, careful consideration was given to the regulatory bodies that need to approve the transaction.

MTS is waiting to see what approach the Liberal government will take in terms of telecom policy, but has been encouraged by “the openness” enjoyed with the government so far, Forbes says. “Understanding those needs, understanding those requirements, and the expectations they have to entrust the communications of Canadians into another service provider.”

MTS will either put the expected $425 million in proceeds from the sale into paying down the debt accrued after acquiring wireless spectrum, otherwise reinvesting in the organization, or giving back to shareholders, he added.

Zayo shared this slide detailing what its current customer base looks like: