According to the The Organisation for Economic Co-operation and Development (OECD) latest Science, Technology and Industry Scoreboard for Canada, more than 77 per cent of Canadians aged 16-24 attended online courses in 2016, nearly doubling runners-up Brazil (43 per cent) and Korea (40 per cent).

For Canada, this was a small increase from 2009, when 72.4 per cent of Canadians in the same age group attended online courses.

More than 93 of Canadian universities offer online courses and programs, says a 2015 survey from an EduConsillium. 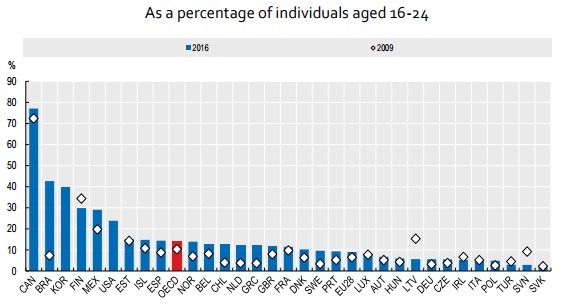 The scorecard also says nearly 12 per cent of domestic scientific documents in Canada were in the world’s top 10 per cent most cited, a slight decrease from 2005, but on par with the European Union.

Canada was also the sixth largest producer of most-cited scientific documents on machine learning after the United States, China, India, the United Kingdom and Italy.

The technology with the highest female share, according to the scoreboard, was polymer. Thermal devices had the lowest.

Canada also gained nearly 1.2 million jobs, most of which came from the construction, wholesale and retail trade, and business and public services, but its government budgets for R&D declined nearly nine per cent from 2008 to 2015.

Is there an easier way to manage all your security tools?