As part of the virtual Web Summit, Toronto mayor John Tory this week joined Sadiq Khan, mayor of London, U.K. and Fernando Medina, mayor of Lisbon, Portugal to compare notes on how their cities are coping with questions around technology and the data it collects.

“One of the things that we do know is, for good reasons or bad, some members of the public are a bit nervous, cynical, scared, frightened about some of the downsides of technology,” Khan noted, adding citizens have privacy concerns over who has access to their data. 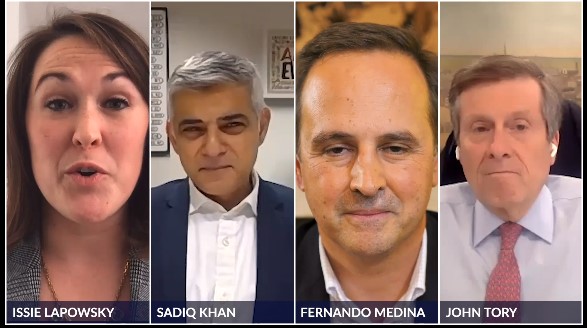 London has taken a number of steps to alleviate those fears, including public consultations and creating the London Ethics Panel, a group of independent experts who advise the city about ethical matters. And, said Khan, in the absence of legislation, mayors such as those on the panel, have been working on checks and balances of their own. Tory concurred.

“We learned a lot of lessons that Mayor Khan has made reference to with respect to the sensitivity of people and the collection and use of data,” he said. “And one of the things we’ve been doing successfully is using data in a way that responds to some very real concerns people have. For example, we’re collecting a lot of data now that are forming the basis for an equity action plan on COVID-19. So I think when people see that and see that the people who might traditionally have the greatest fear about that data being misused are also going to be the beneficiaries of the fact we’re collecting it and using it in an appropriate, responsible way.”

He also touched on the demise of the Sidewalk Labs project. “It didn’t go forward because of an inability to reach a business deal. I mean, everybody had their own reason, and it was all very polite.” But, he said, the mechanism developed to put data into a public trust, with safeguards to alleviate concerns that people’s data would be misused or sold by a multinational corporation, gave the city a model to use in future projects.

What would he have done differently? “Go slower,” he answered. By the time the public trust idea was developed, there was already controversy, and people had convinced themselves that no good could come out of the project. The negative momentum could not be overcome. But if people think the city can do these projects without a public/private partnership, he put that notion to rest, saying that instead, the city has to make sure it maintains public confidence in those partnerships.

“And this is a lot of what Mayor Khan was talking about,” he said. “You’ve got to have the public’s confidence when you use new technology, whether it’s in policing, or whether it’s in a host of the things that he mentioned, or in development of a new neighbourhood like this – you’ve got to have the public’s confidence in terms of what’s going to be done with the data, how intrusive is this technology going to be in this data collection in their lives, and so on. And in this case, we were trying to fix that after the debate had broken out, as opposed to perhaps having that all in place.”

He’s impressed that during the pandemic things have been accomplished at what he calls “wartime speed” and is now asking people inside the government why it can’t always happen.

Mayor Medina then spoke about Lisbon’s initiatives to help citizens while safeguarding their data. “The big issue was not the question of the technology itself, it was the question of are we organized to give the public safeguards so only the right people have access to the information? And it was difficult, as John said,” he observed. “In this pandemic, everything worked at as a war speed, so we solved issues that could have taken years to solve in weeks.”

“The reality is, the genie’s out of the bottle when it comes to some amazing technology, some disruptive technologies,” Khan said. “What we will do is to make sure in the absence of national regulation to have clear rules of the game. I’ve got concerns about how we keep checks and balances on emerging technologies that aren’t completely foolproof.”

Lynn Greiner
Lynn Greiner has been interpreting tech for businesses for over 20 years and has worked in the industry as well as writing about it, giving her a unique perspective into the issues companies face. She has both IT credentials and a business degree.
Previous articleCoffee Briefing, December 4, 2020 – News from AWS, distributors, and MSPs on Reddit talk about IT burnout
Next articleHow 5G drones are saving Canadian crops