An alarmingly low number of executives and employees in Canadian firms are proficienct in key technologies that will figure in the growth of corporations in the next six years, according to a recent survey.

A poll of 5,400 executives and employees in a wide range of industries from 27 countries indicates that non-millennial workers in Canada lag behind their counterpart in skills such as analytics, cloud computing and programming. The global survey called WorkForce 2020 conducted by research group Oxford Economics for software firm SAP SE (NYSE: SAP), showed that out of 217 Canadian executives and employees, less than half (44 per cent) expect to be proficient with these key technologies in the next three years and only 19 per cent claim proficiency today.

Millennials, also known as Generation Y, are the demographic cohort following Generation X. They were born around the years covering the range of the early 1980s and early 2000s. Many studies indicate that the millennial generation is steeped in technology and is creating a huge impact in the industry.

If you single out cloud, only 9.7 per cent of non-millennial Canadians in the workplace claim they are proficient in cloud-based technology.

By contrast, emerging markets like Colombia and Malaysia (20 per cent and 21 per cent) have double the amount of non-millennials that work in cloud technology today.

“When you find that less than 10 per cent of non-millennials claim proficiency in cloud technology, that’s troubling,” John Hiscox, vice-president of human capital management at SAP, said in an interview. “I don’t know if there’s anything such as skills in cloud, what I think the study should be talking about is the appreciation of the power of cloud and I don’t think a lot of non-millennial executives in Canada have that yet.”

The percentage of cloud technology-proficient non-millennials in other countries is:

When asked about analytics technology only 18 per cent of Canadian workers were able to claim proficiency. Again the numbers were much higher in other countries:

Analytics is critical in today’s business environment simply because of the volume of data that organizations need to deal with, according to Hiscox. 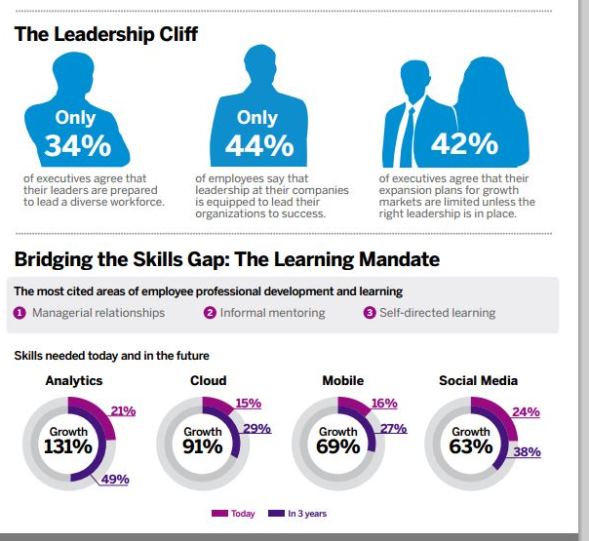 “The key is deriving insight from information and business leaders need to be setting the expectation for using analytics and moving the enterprise from a cap ex model to an op ex model,” he said. “Skills in these key technologies are not critical in the executive level but leaders need to understand the potentials because they are the ones driving the agenda.”

In order for Canadian businesses to be able to compete with its global peers, companies need to invest more in training workers to become proficient in analytics, big data and cloud, he said.

Should companies really be worried since tech-savvy millennials are bound to ascend to leadership positions in a few years anyway?

The study estimates that younger workers (44 per cent of whom are proficient in cloud and analytics technology) will likely be occupying leadership roles in about three years.

That would still be too late and too little according to Hiscox.

“Three years can be a very long time today, by that time the amount of data that companies need to deal with would be very huge. And do you think that less than 50 per cent proficiency will help Canadian business become competitive?” he asked.

WorkForce 2020 found that 82 per cent of Canadian companies are increasingly using contingent, intermittent, seasonal employees or consultants to fill the skills gaps.

“The re-education of our workforce today is a necessary step to fill the labour shortage we’re seeing for high paying jobs in technology,” he said. “However, “I see this skills gap as an opportunity.”

A recent IDC survey on the IT offshoring trend in Canada indicates that the practice of outsourcing technology work to service providers outside the country will result in the loss of 4,450 jobs by 2018 but will result in the a productivity benefit on $17.8 billion.

Ensuring the workforce and youth are proficient in technology will enable Canadian business to grow and “prevent worry trends such as the offshoring of high-tech jobs,” he said.

Analytics technologies are still relatively new “and there is a lot of potential here for developing skills in that area in the Canadian workplace,” he said.

Rather than look elsewhere for people to fill their talent gap, some firms are concentrating their search inside the Canadian borders. Schrutt cited Bell Canada which has recently launched a massive search of analytics talent in Quebec and Ontario.