SonicWall again an independent company, vows to be more agile

SonicWall is celebrating its re-invention as an independent security vendor with a modest product announcement: An upgrade to the firmware running its Secure Mobile Access 1000 security gateway.

The company said today that version 12.0 of the operating system for the four models in the enterprise appliance line adds more global high availability, allows organizations to add cloud single-sign on, improves encryption and a few other bells and whistles.

But the company is just as interested in talking about its liberation from Dell Inc., which bought SonicWall for about US$1.2 billion from a private equity firm in 2012 to add to its security offerings. However, after Dell was privatized in 2013 it decided certain products were disposable. As a result Dell announced in the summer its Software Group, including SonicWall, was being sold to private equity firms Francisco Partners and Elliot Management.

That deal came into effect earlier this month.

“Operating within a company the size of Dell did not have a positive impact on our ability to move fast, to innovate,” Bill Odell, SonicWall’s vice-president of corporate marketing, said in an interview. “We weren’t that big to them.

“When we would want to do a press release or a do press interview and go to the Dell PR channels we were stacked against all the other news Dell wanted to get out into the marketplace … Even on resource allocations and the ability to do things from a development perspective we had to go through hoops. It didn’t allow us to be agile and nimble as we can be.”

Dell will continue to sell SonicWall products with its network solutions, he added, particularly to very large enterprises.

Coincidentally, the Secure Mobile Access (SMA) line came to SonicWall through its 2007 acquisition of Aventail.

The SMA 1000 line now has four models for allowing employees or customers secure remote access through an SSL VPN. Version 12.0 of the operating system adds a number of capabilities including 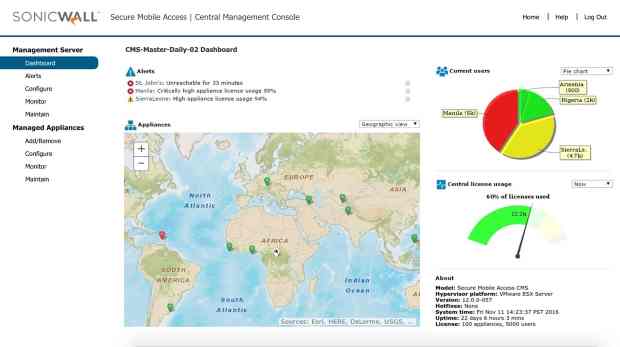 “We now allow deployment of end nodes to any data centre, rack, location and keep active-active model in place,” through dynamic pool licencing, said James Whewell, director of product management. Traditionally a licence is applied to the appliance, and then administrators would have to over-provision or guess what the worst case demand might be. The dynamic pooled licences re-allocate themselves every few seconds and evaluate the load is coming into each data centre node and make sure the right licenses are available – handy for business continuity in disaster recovery.

—Blended single sign-on technology for organizations with have hybrid cloud and on-premise applications. It supports any multi-factor authentication solution to protect applications running in the cloud. “It allows a move to the cloud seamlessly without destroying the user experience,” said Whewell.

–Improved security by adding the latest ciphers and strongest encryptions, including the Suite B cryptographic algorithms.

— An improved interface, which also allows users to cut, copy and paste while online

The SMA 1000 Series is compatible with Windows, Mac OS X, Linux, iOS, Android, Kindle Fire and Chrome OS devices, and, depending on the model, can support up to 20,000 concurrent connections on a single appliance. Multiple appliances can scale higher when managed by SonicWall’s Central Management Server and utilizing the dynamic pooled licenses.

Howard Solomon
Currently a freelance writer, I'm the former editor of ITWorldCanada.com and Computing Canada. An IT journalist since 1997, I've written for several of ITWC's sister publications including ITBusiness.ca and Computer Dealer News. Before that I was a staff reporter at the Calgary Herald and the Brampton (Ont.) Daily Times. I can be reached at hsolomon [@] soloreporter.com
Previous articleCall centre agents warned about malicious email attachments from potential customers
Next articleStartup says it can protect industrial control systems data from attack