Arvind Krishna’s first keynote as IBM’s chief executive officer probably wasn’t the event of his dreams. Instead of standing in front of an enthusiastic crowd at IBM Think in San Francisco, he spoke to a digitally-connected audience over video powered by Watson Media, not knowing who was watching. As it happens, 75,000 people were registered at the time he spoke, but IBM says that grew to well over 90,000 by the second day of the two-day event (final numbers aren’t yet available but it’s likely that attendance topped 100,000).

“This pandemic is a powerful force of disruption, and an unprecedented tragedy,” Krishna said. “But it is also a critical turning point. It’s an opportunity to develop new solutions, new ways of working and new partnerships that will benefit your company and your customers, not just today, but for years to come.”

Hybrid cloud and artificial intelligence (AI) are the two dominant forces driving today’s digital transformations, he noted. There are four underlying reasons for hybrid cloud adoption; crediting VMware CEO Pat Gelsinger, from whom he got the idea, he called them the four imperatives.

First is history. Companies have workloads and apps, messaging systems and transactional systems integrated into their operational systems. Hybrid cloud, he said, is meeting them where they’re at in terms of the infrastructure choices they’ve already made.

The second is choice – relying on only one infrastructure, such as one public cloud, locks companies into that vendor, and to that vendor’s innovation. Hybrid cloud grants the freedom to choose.

The third is physics. “You simply can’t run a factory floor with robotic arms that require a 50 millisecond response time through the cloud,” he pointed out. “In many cases, your IT systems need to be physically close to your data and services.” 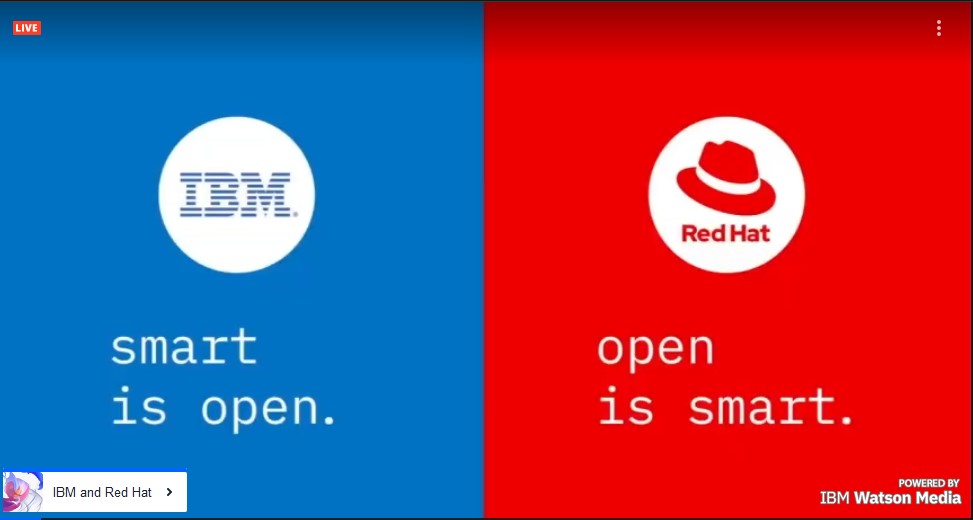 Finally, there’s the law. The legal framework under which a company operates, with restrictions on data sovereignty and other factors, dictates what may or may not be done on a given sort of infrastructure.

“These all suggest that hybrid cloud as a major force in tech is here to stay. Now to help you, our clients, capitalize on the massive opportunity hybrid cloud represents, we have made big bold bets. Most notably, we have joined forces with Red Hat, to give you the unique ability to build mission-critical applications once and run them anywhere.”

Red Hat, particularly its OpenShift Kubernetes platform, was front and centre in many of the presentations, since several of IBM’s announcements were based on the platform. Both Krishna and IBM’s new president, Jim Whitehurst (former president and CEO of Red Hat), even had the company’s iconic red fedoras in the background during their presentations.

Healthcare provider Anthem‘s senior vice-president and chief digital officer Rajeev Ronanki said that OpenShift is a key part of his infrastructure too. “When we look at the AI supply chain for Anthem, IBM’s architecture and specifically the OpenShift and Kubernetes containerization architecture enables us to manage our AI supply chain, very efficiently and with high quality,” he said. “And as with any supply chain, we need to be able to integrate lots of third parties, we need to work with lots of partners, including companies like CognitiveScale. To bring all these third parties into a cohesive end to end solution, we need standards, we need interoperability, we need easy developer tools, and we need scalable platforms. I think IBM is providing that and a set of capabilities for us really effectively, and really integrating those capabilities so that we don’t have to piece it together ourselves.”

IBM’s big launch was Watson AIOps, which uses machine learning and AI to automate detection, diagnosis, and response to anomalies in IT infrastructure. It is built on Red Hat OpenShift, so can be run across any cloud, integrates with other IT ops tools, and uses Slack as its user interface.

“Being able to pull everything together for real-time automated analysis and response, do contextual comparison and analysis to past IT incidents, narrow down on cause and provide courses of action for remediation while having all of this documented, back traceable and automated – it’s obviously hugely promising,” according to IDC Canada research vice-president Warren Shiau. “Speed and efficiency in analysis and response in IT areas like ops and cybersecurity is really where AI is finding a big value proposition.”

He’s not alone. In its October 2019 FutureScape, Worldwide Digital Transformation 2020 Predictions, market intelligence firm IDC predicted that, by 2024, enterprises that are powered by AI will be able to respond to customers, competitors, regulators, and partners 50 per cent faster than those that are not using AI.

Krishna’s second big announcement was the IBM Cloud Satellite tech preview. It lets companies run workloads, data, and services across any environment—whether that is public cloud, their own data center, or an edge location—so they can achieve consistent application operations and improved performance across their environments. It extends IBM Cloud with “locations” – infrastructure outside the IBM public cloud populated by Red Hat Enterprise Linux hosts.

He also launched new services and capabilities for edge computing and telcos that include cloud solutions built on Red Hat and OpenShift.

He then went on to describe the hybrid cloud philosophy that the two companies share, of common open architectures that allow workloads to run reliably anywhere.

“It’s important to realize that hybrid cloud isn’t just about technology for technology’s sake,” he noted, adding that IBM has invested heavily to build the industry’s only hybrid cloud platform that runs across all major clouds and in customers’ own data centers, as well as across multiple computing architectures.

“At the heart of that platform are the technologies from Red Hat. Red Hat Enterprise Linux and Red Hat OpenShift are the world’s leading Linux container and Kubernetes platforms with the richest open source ecosystems,” he added. “Together, they provide the only open multi-vendor cloud platform, allowing you to build workloads once, and run them anywhere. Red Hat’s mission is to overcome the limitations of proprietary software and lock in which has held back innovation for decades.”

As with Red Hat Virtual Summit, there were good, bad, and occasionally ugly features of Digital Think. The platform, powered by Watson Media, was well laid out and seemed to hold up well as the attendee count grew. However, noted attendee Christopher Penn, chief data scientist, Trust Insights, in an interview, “I was shocked at the number of people including high ranking technology executives and public speakers who have absolutely no idea how to do live/recorded video. Poor microphones, bad lighting, etc. I know it’s not their day job to produce films etc. from home, but there are some basics they need to stick to.” He also bemoaned the live chat feature, which he described as a “dumpster fire”, plagued as it was with a continuous stream of irrelevant comments that obliterated anything useful.

While IBM tried to replicate popular features from the live conferences, Penn said he missed the serendipitous conversations at the booths. While there was a dedicated “Ask the Expert” chat available, and he said those staffing it were very helpful, he said, “there’s nothing quite like opening up your laptop, sitting shoulder to shoulder, and saying, ‘so, what did I do wrong here?'”

Still, he noted, “That said, it’s also the best experience I’ve had so far in the new pandemic world. A good combination of live and on-demand made it easy to make it to most of the technical content which was good, and you weren’t forced into weird interactions with other attendees if you didn’t want to be.”

Lynn Greiner
Lynn Greiner has been interpreting tech for businesses for over 20 years and has worked in the industry as well as writing about it, giving her a unique perspective into the issues companies face. She has both IT credentials and a business degree.
Previous articleHashtag Trending – Sidewalk Labs dies; Rideshare apps struggle; Telus revenue short
Next articleRemote work isn’t the only ‘crisis innovation’ that’s here to stay