Improved data processing speed and automation are usually the key capabilities being added to any security product these days, and LogRhythm is the latest to follow the trend.

The company, known for its security information and event management (SIEM) suite, said Thursday these are they key ingredients of the new version 7.2 upgrade to the security intelligence and analytics platform that underlies all of its products.

“One of the big challenges is organizations just don’t have enough security people to throw at the [security] problem, so a goal of ours is how do we automate and make the analysis process as efficient as possible the people you do have are highly effective,” company CTO and co-founder Chris Petersen said in an interview.

Related Articles
Inside SIEMs: How to get the most out of event management suites
Sidebar: Avoid these six SIEM pitfalls

The platform enables visibility, data collection and analytics. Improvements include

–Better performance: Up to a 200 per cent increase in performance ingesting data, which the company says critically important to large enterprises such as those exceeding 100,000 messages a second. It could mean reducing the number of rack units supporting LogRhythm applications while supporting the same workloads, Petersen said.

Also, the onboarding data from a variety of enterprise sources is easier. “You can simply point devices to use” – for example a firewall — “and we will intelligently recognize the device, automatically pre-configure it and begin to process that data.” Until now administrators had to do configurations manually; 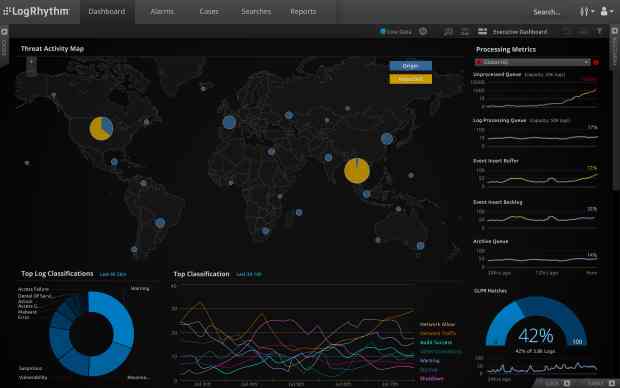 –Support for more data sources: Twenty more metadata fields have been added to the platform’s data structure. Also support has been extended to a total of 785 data sources (including operating systems, applications, security systems). In addition, there’s more visibility into cloud infrastructure workloads such as Amazon Web Services, Salesforce and others;

–Improved security automation and orchestration capabilities allowing security teams to move an alarm into a case and add information for investigation. There are 20 new automated actions giving teams automated playbooks for incident response.

Howard Solomon
Currently a freelance writer, I'm the former editor of ITWorldCanada.com and Computing Canada. An IT journalist since 1997, I've written for several of ITWC's sister publications including ITBusiness.ca and Computer Dealer News. Before that I was a staff reporter at the Calgary Herald and the Brampton (Ont.) Daily Times. I can be reached at hsolomon [@] soloreporter.com
Previous articleNutanix targets VMware with networking features
Next articleMany consumers still won’t take simple steps to stay safe online, survey finds