It’s what you need to know right now in the world of IT and tech – ’nuff said. (Best taken with a side of Hashtag Trending)

The board of directors for Cogeco Inc. and Cogeco Communications Inc. are rejecting a bid from a New York firm that offered $10.3 billion to buy the companies. Altice’s offer proposes Rogers Communications would buy Cogeco’s Canadian assets for $4.9 billion. If the deal were to happen, Altice would own Cogeco’s U.S. assets, including Atlantic Broadband. Analysts are also saying it would greatly benefit Rogers as it merges Ontario cable assets.

RSA says Rohit Ghai will continue to lead the independent security firm as its CEO and serve as group CEO across all three businesses. William Chisholm, STG’s Managing Partner and Chief Investment Officer, will serve as the Chairman of the Board. Bill Diaz will join RSA as CEO, RSA Archer to lead the Integrated Risk Management business.

After the NSA’s phone records collection program was first exposed by Edward Snowden in 2013, the NSA claimed the program had helped thwart terrorist attacks. A judge yesterday said there’s no evidence of that claim. A federal appeals court ruled on Wednesday that the NSA’s sweeping program to collect Americans’ phone records was illegal and possibly unconstitutional. [Business Insider]

It’s got more than 500,000 downloads, the nod from most privacy experts, and yesterday, Saskatchewan became the latest province to signal its interest to adopt Canada’s exposure notification app COVID Alert.

It’s a good start, says James Eberhardt, a senior software developer for Canadian Digital Service (CDS) – one of the partners behind the app’s creation. But it’s too early to tout anything definitive about the application’s performance, he admits. Eberhardt spoke during an online briefing with members of the public to provide some background on COVID Alert. While the discussion revealed little that we didn’t already know, Eberhardt was adamant that the Google Apple Exposure Notification (GAEN) framework is the strongest option Canada and the rest of the world have to supplement current efforts to stomp out the virus.

“It’s not a contest to see who wins,” he reminded everyone. “It’s collaboration and we all win when we’re collaborating.”

Eberhardt even praised one of the earliest attempts to launch an exposure notification app, Singapore’s TraceTogether. The app required Bluetooth to be left on all the time, as well as the application itself. It was a massive battery-sucker and quickly flopped due to its user-unfriendliness. Until a recent 180, TraceTogether was also being used by the Alberta government.

After walking us through the app’s inception – he noted there were roughly 40 Shopify volunteers who decided to take the GAEN framework and tailor it to Canada’s needs, and some of them are still working with CDS – Eberhardt explained how the application determines an exposure. 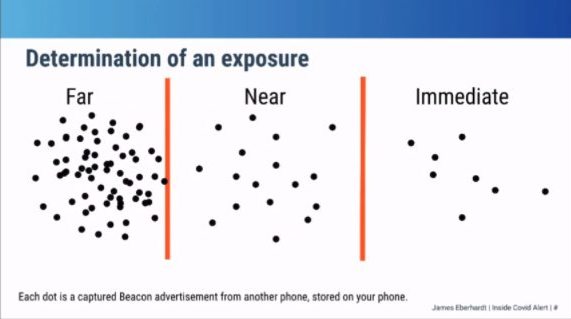 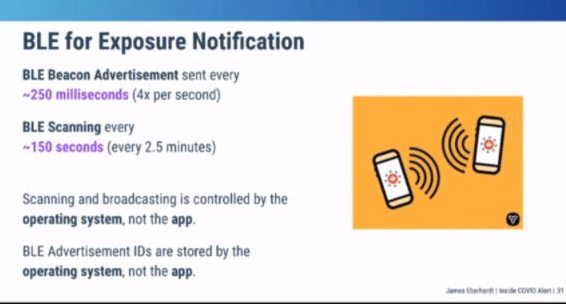 Bluetooth Low Energy is what keeps the app humming. The tech is strong enough he says to exchange random codes with other people nearby. These codes will be stored for two weeks, and are only exchanged between the two cellphones. The beauty of the GAEN framework is that it doesn’t produce an ID of the individual or even identify a location. It only tracks proximity. It’s the only way to ensure people’s privacy, but Eberhardt admits BLE has limitations.

“Is BLE perfect? No, it can be blocked by a handbag, a dufflebag, pocket, or a person turning away from you. These things can make a difference,” he said, adding even weather can make a difference. “But it’s a good way of approaching a problem and it serves as a complementary piece.”

Canada’s Centre of Excellence in Next Generation Networks became a member of the fresh-faced Innovation Economy Council this week.  The IEC was founded by MaRS, OCE, Communitech, DMZ, Invest Ottawa and CCRM during the early weeks of the pandemic. The coalition will produce research material and host events to help build a new “industrial innovation policy” for Canada. CENGN says it’s got a lot to offer with its own resources and a deep relationship with a host of technology partners.

A new report from Forrester Consulting reaffirms what we already know: Migrating to the cloud is often expensive, complicated, and misconfigured. Nearly two-thirds of organizations with content exclusively on-premises believe they face a competitive disadvantage. Half are struggling to keep up with customer expectations for self-service. The report was commissioned by OpenText.

BlackBerry flexed its muscles recently by touting its Unified Endpoint Manager (UEM) software which got the Department of Defense Information Network’s (DoDIN) approval as a Mobile Device Management (MDM) solution. BlackBerry CEO John Chen gave the news a thumbs up.

“BlackBerry is extremely proud to be a partner of the United States Federal Government for over twenty years,” he said in a Sept. 1 press release. “DISA is responsible for delivering world-class secure communications and collaboration tools across the DoD and BlackBerry is honoured to receive approval to be on the DoDIN APL.”

Taking AI on the road

What are digital certificates and how do they work? [IT World Canada]

#COVID19-related #phishing attempts are still ongoing. Cyber criminals will try to trick you into clicking on links or attachments so they can infect your 📱💻 or steal your data.

If you can’t figure something out from docs/stackoverflow, it can be annoying in the moment. However, reading others’ nontrivial code is one of the absolute best ways to level up as a dev so there is a bright side 🙂 https://t.co/c1wDg6ZUSe

Alex Coophttp://www.itwc.ca
Editorial director for IT World Canada and its sister publications, and former community reporter. Also a great pick up basketball player | acoop@itwc.ca
Previous articleRogers’ second attempt at entering Quebec rejected by Cogeco
Next articleThe TikTok sweepstakes continue, but a researcher warns of dubious ads that need to be cleaned up on the platform

Is it time for small businesses to rethink their cyber security strategies?

Is it time for small businesses to rethink their cyber security strategies?

Recommended for you
Digital Transformation

Calgary DI’s Helen Wetherely Knight | A 2019 CanadianCIO of the...