Is public or private cloud cheaper? Here’s the answer

Cost reduction was always one of the biggest attractions of cloud computing, but the question has always remained: is it cheaper to do it in-house or with a third-party public cloud provider? Now, 451 Research claims to have answered that question, and the answer is: It depends.

The key metric here isn’t so much volume (the number of virtual machines that you’re running) as it is labour efficiency (the number of engineers that it takes to run them). In its latest Cloud Price Index, the analyst firm says that while public cloud can offer cost benefits for smaller computing environments, when you reach a certain ratio of labour efficiency it makes more financial sense to do it in-house.

451 Research found that when labour efficiency is beyond 400 virtual machines per engineer, all private cloud options become cheaper than both public cloud and managed private cloud platforms.

This will make sense to any company that has suffered ‘cloud shock’ when switching to a public cloud service. While the lack of hardware and software investment can be appealing, hidden costs such as data transfer fees and the price of scaling up data storage and virtual CPU usage can leave companies paying more than they expected for public cloud services, unless they plan their capacity carefully. 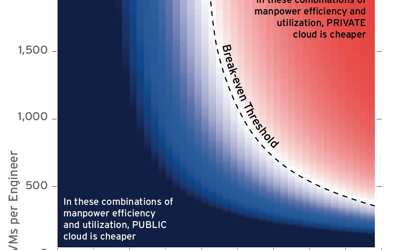 The Cloud Price Index also reveals cost differences between different cloud infrastructures used in private infrastructures. Private cloud frameworks from VMware and Microsoft offer total cost of ownership advantages compared with OpenStack, but only below that key 400 VM-per-engineer figure. As soon as companies mature to the point where they can have one engineer managing more than 400 virtual machines, the equation flips and OpenStack becomes more economically viable.

These numbers stem from the role that staff salaries play in the cost of administering private cloud, point out 451 Research analysts. It’ll be good news for OpenStack, which holds its annual User Summit in Barcelona this week.

Jonathan Bryce, executive director of the OpenStack Foundation, welcomed the numbers. He explained that OpenStack on private cloud was originally a functionality proposition rather than a cost one.

“When we first started talking to people a couple of years ago, they were using OpenStack in private deployments because they wanted to give developers programmable elastic infrastructure that they could innovate with,” he said.

Things have changed since those early days as OpenStack has become easier to deploy, and as administrators with the necessary training have eased pressure on the skills market. 451 specifically referenced OpenStack’s certification program and suggested that more administrators supporting the open source system will hit the market in the coming year.

“If you know your application and you have some experience in running infrastructure, then you can definitely run workloads in that environment more cot effectively than public cloud,” Bryce added.

We have seen some landmark cases where large tech firms have abandoned private cloud infrastructure in favour of their own. The most notable is cloud storage firm DropBox, which walked away from Amazon Web Services in favour of its own home-cooked infrastructure.

Nevertheless, appetites for public cloud remain strong, and 451 Research warns against moving entirely to public cloud on the basis of TCO arguments. In its statement on the Cloud Price Index, its analysts warn that companies pursuing private cloud options must be mature enough to handle the capacity, resource usage and labour efficiency thresholds, or risk wasting “thousands of dollars each month compared with a public cloud infrastructure”.

TCO isn’t the only factor in the public vs private cloud debate either, 451 analysts concluded. Security, privacy and long-term strategy are still big factors, too.

Danny Bradburyhttp://www.wordherder.net
Danny Bradbury is a technology journalist with over 20 years' experience writing about security, software development, and networking.
Previous articleBlackBerry launches DTEK60 as it forges ahead with new hardware strategy
Next articleDevOps and security need to become better friends