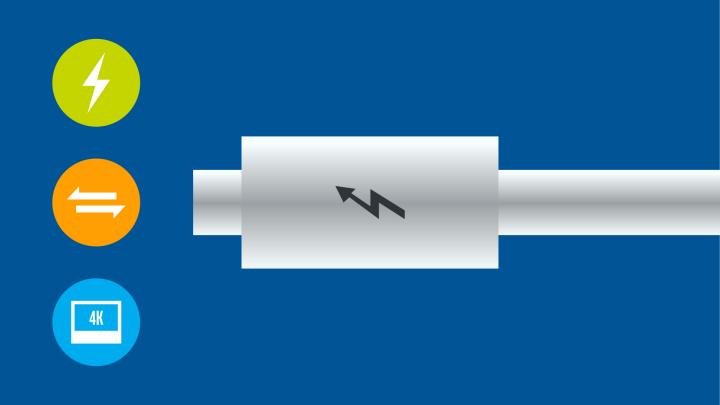 Data throughput technology has been increased as well. Video support has been expanded to drive two 4K displays or one 8K display.

Other quality improvements include support for docks with up to four Thunderbolt ports and PC wakeup through Thunderbolt dock connected keyboard or mouse.

This time around, Intel has also tacked on an additional certification requirement for Thunderbolt 4: DMA protection for Intel VT-d access. Intel VT-d is a virtualization technology that allows the virtual machine to directly communicate with the host system’s hardware, and direct memory access (DMA) protection prevents tampering when the virtual machine accesses the memory.

Intel will also be releasing the JHL8540 and JHL8340 standalone host controllers for computer makers, and the JHL8440 device controller for accessory makers.

Both Thunderbolt 4 PCs and peripherals are expected to arrive later this year.

Correction: The original article incorrectly attributed the bandwidth increase to the use of PCIe 4.0. Intel explained that Thunderbolt 4 is only making the increased speeds a minimum requirement. The Intel 8000 series Thunderbolt 4 controllers support 32 Gb/s data speeds over PCIe 3.0, as do some Thunderbolt 3 controllers available today.

Tom Li
Telecommunication and consumer hardware are Tom's main beats at IT World Canada. He loves to talk about Canada's network infrastructure, semiconductor products, and of course, anything hot and new in the consumer technology space. You'll also occasionally see his name appended to articles on cloud, security, and SaaS-related news. If you're ever up for a lengthy discussion about the nuances of each of the above sectors or have an upcoming product that people will love, feel free to drop him a line at tli@itwc.ca.
Previous articleGartner underlines the need to ‘deploy AI guided selling capabilities to maximize every deal’
Next articleUpcoming features in Microsoft Teams help make meetings ‘less weird’