How a CanadianCIO nomination makes a difference 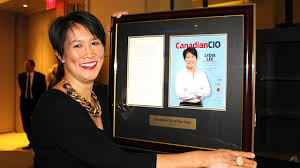 When a senior director with the University Health Network (UHN) approached Lydia Lee last year to see if she would agree to be nominated as a CanadianCIO of the Year, the dynamic IT lead for four downtown Toronto hospitals was taken aback.

“You work hard every day to try to do the right thing, lead your team the best way you can and hope to have some sort of long-lasting impact. Whether anyone ever notices all of that is the last thing you think about.”

Making it clear she was simply acting as a conduit to bring attention to her team for the development several technological solutions that improved patient safety, she agreed, and was nominated with letters of support from Dr. Bob Bell, Ontario’s Deputy Minister of Health and Long-Term Care, and David Thomas, Vice-President of Telus Health.

Lee was selected by a panel of industry leaders for changing the course of healthcare technology for UHN and across the province.

“Being named the Public Sector Canadian CIO of the Year in 2015 was one of the great highlights of my career. In the public sector, you need a thick skin and perseverance so you don’t lose sight of the end game in whatever you’re doing. To be selected by industry peers and recognized like this for making a difference was unexpected, overwhelming and tremendously uplifting.”

The opportunity to provide that same kind of uplifting opportunity to a deserving CIO in the public or private sector is at hand. CanadianCIO has extended the deadline for nomination until July 22.

“The nomination process is simple, but requires evidence of exceptional performance,” says Ryan Patrick, editor of CanadianCIO. “It’s not just for IT companies. It’s open to any company in Canada of any size.”

The award is presented in conjunction with the CIO Association of Canada and the Information Technology Association (ITAC) during the Ingenious Awards, a celebration of innovation and innovators who use technology to advance business and society.

Steve Proctorhttp://www.itworldcanada.com
Steve is Vice-President Marketing and Communication with ITWC. He spent 25 years in progressively senior positions as a journalist and editor with the Halifax Herald, with his final ten years as Business Editor. He has published two books and his freelance articles have appeared in national and regional magazines. He has led social media and communication efforts for two crowdfunding ventures and written and directed numerous dinner theatres for charitable endeavours.
Previous articleAntivirus maker Avast purchases rival AVG in US$1.3 billion dollar deal
Next articleOnline PIPEDA tool highlights Canadian trust issues