Apple launches its Netflix competitor; Huawei will unveil its P30 smartphones; and Pinterest will go public sooner than expected.

Today Apple will unveil is video streaming service at an event in the Steve Jobs Theater in Cupertino. The long-anticipated Netflix competitor will have both its own original content and partnerships with other premium brands. MobileSyrup reports Some pretty famous names have been hinted at for the original content so far. Those include Steven Spielberg, J.J. Abrams, and Oprah. There have been hints that Apple might give away some of that content for free, as a way to hook in users to pay for content from partners. Rumours have mentioned potential deals with HBO and Showtime. But that is likely to be different in the U.S. compared to Canada, due to existing licensing deals.

Tomorrow, Chinese electronics manufacturer Huawei will unveil its P30 smartphone at an event in Paris. Some details about the device leaked last week, so we know it will have four cameras. That will include a 40 megapixel sensor and a 10x hybrid zoom. The P30 Pro will have a low light sensor. There’s also an interesting video mode, which will show you a split screen of the video from two different cameras at once. You’ll be able to choose between the wide-angle view, or the close-up view. Huawei will also release some new smart watches at the event.

Pinterest is planning to IPO sooner than expected, Bloomberg reports. The social, image-sharing website is pegged at a value of $12.3 billion based on its fundraising. The firm was founded in 2010. It opened its Canadian office in Toronto just last September. It’s run by country manager Erin Elofson. Many other Silicon Valley startups plan to go public this year, including Lyft, Uber, Slack, and AirBnB. 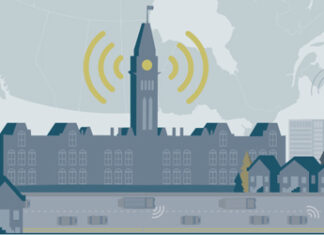 Digital economy strategy promises Canada will be “among world leaders”