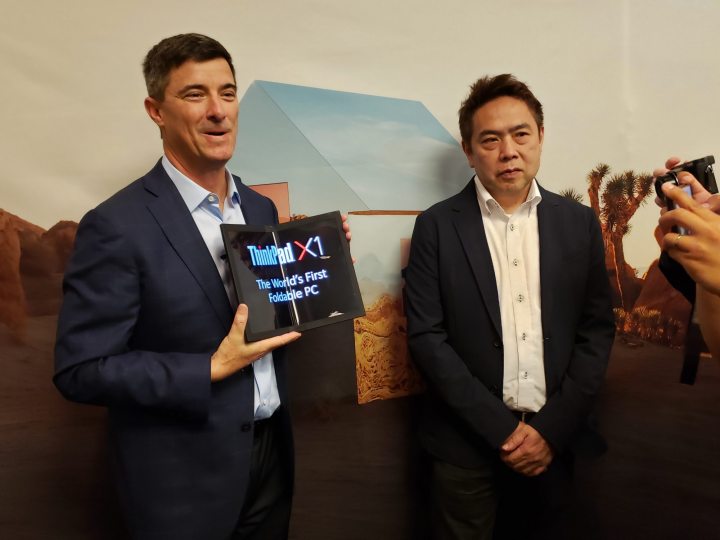 Orlando — Lenovo briefly paraded its latest innovation, a foldable ThinkPad X1 laptop, in front of reporters during its annual Transform 3.0 at Accelerate Monday, calling it the world’s first foldable PC.

Several Lenovo executives, including Luis Hernandez, vice-president of commercial product solutions and development, alluded to a strong desire by the company to pull the device out of development before its 2020 release – no specific launch date or price was announced – and show it off to the world during its conference.

“They actually let me out of the lab to be here with you all,” joked Hernandez, who touted the accomplishments of Lenovo engineers and its technology partners as it relates to the foldable device, but was mum on a lot of details. What’s certain at this point is that it’s part of the ThinkPad X1 family, boasts an OLED 2K display, which was made in collaboration with LG, and it can fold in half, reducing its width by 50 per cent. It’s also Intel-powered with Windows and weighs less than 2 lbs.

Lenovo is adamant that the foldable ThinkPad X1 is not a phone, tablet or a hybrid of the two – it’s a full-fledged laptop with a foldable screen.

“Within our lineup of PCs, this is our most mobile addition to the portfolio,” said Jerry Paradise, Lenovo’s product manager and head of its commercial portfolio.

During a web briefing prior to the Orlando event, Thomas Butler, Lenovo’s executive director of commercial product management, told reporters that the most-mobile workers of today will benefit greatly from a device they can carry around like a phone, but also use for activities that require heavy compute power.

“This device will be more adaptable for using more so than a traditional notebook or mobile device. We know you’ll have a phone in your pocket or purse, but your notebook under your arm isn’t useful in all modes,” he explained.

Butler walked through a scenario where one wakes up in the morning, reads a few pages from a book while having coffee with the laptop folded in half, watches a video unfolded, and then proceeds to use it like a regular laptop at work with device’s digital keyboard. When asked about any lessons learned from Samsung’s recent bad luck with its Galaxy Fold devices, Thomas said the snafu reinforced the importance of rigorous durability testing. The foldable ThinkPad has yet to complete all of its quality assurance testing, Thomas said, but will include the usual ones against cold, heat, shock, dust and much more.

The hinge in particular, he added, will receive extra attention.

“We anticipate this device will be opened and closed more than normal, so we’re doubling the hinge test cycles that we’re running on this device compared to regular Yoga and other devices.”

**Alex Coop’s travel and accommodations to cover Lenovo Accelerate were paid for by Lenovo. This story was not reviewed externally before publication.**