CIOs need to be ready for digital transformation in 2016, says IDC

A digital revolution is upon us, according to IDC. And while that doesn’t sound like much of an original forecast from a research firm, it noted 2016 will herald a number of developments that IT leaders will have to deal with.

“In 2016, CIOs will face their biggest crisis in leadership as they struggle to adjust to the speed and needs of this business transformation.”

It was 10 years ago that fledgling and ultimately disruptive Netflix launched a contest to improve its movie recommendation engine; the company awarded the prize in 2009 to an algorithm that improved upon its own by 10 per cent, but Netflix would never implement the procedure because it could not economically scale.

Rosen said this is an example of existing enterprise systems, processes, people and infrastructure too focused on the existing mission. “In the long term, this siloed approach brings frustration, disappointment and failure.” 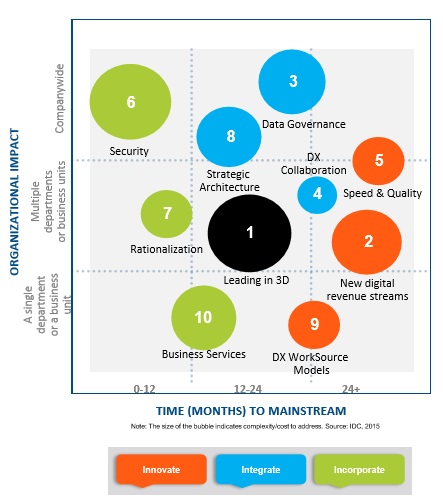 With every change within IT comes the opportunity to increase or decrease cost and complexity, said Rosen, but digital transformation projects that are begun with an understanding of the enterprise negatively impact cost, complexity, integration, inconsistency and security.

IDC offers a number of predictions in its webcast but, emphasizing a number for shifts for CIOs who lead their organizations away from new siloes to flexibility, speed, and consistent experience by providing a easy-to-understand framework for “common where possible, different where competitive that enables business agility and innovation and supports improved decision making.

IDC also sees high-performing CIOs will continuously revisit the optimum mix of crowdsourcing, outsourcing, and in-house delivery options and leverage them accordingly, and that by 2018, 80 per cent of development organizations supporting digital transformation will incorporate collective genius and crowdsourcing into their projects as a regular practice.

Gary Hilson
Gary Hilson is a Toronto-based freelance writer who has written thousands of words for print and pixel in publications across North America. His areas of interest and expertise include software, enterprise and networking technology, memory systems, green energy, sustainable transportation, and research and education. His articles have been published by EE Times, SolarEnergy.Net, Network Computing, InformationWeek, Computing Canada, Computer Dealer News, Toronto Business Times and the Ottawa Citizen, among others.
Previous articleHow widespread are security holes? Cisco finds most of its devices are unpatched
Next articleIntel embeds multi-factor security on sixth-generation Core vPro CPUs