A sandbox can be a useful tool for every CISO to have in a defence strategy, but it isn’t perfect.

A virtual environment in which files can be run to check for suspicious code or executions, sandboxes can sometimes be out-thwarted by attackers who write malware that can detect if code is running on a real machine, or include a several-day delay in execution.

This morning the company announced Sandblast, a new product that includes the technology. It’s an advance over Check Point Threat Emulation, which it replaces. Like its predecessor, Sandblast comes as a cloud service or an on-premise appliance.

Customers who already have Threat Emulation get a free upgrade. Those who already subscribe to the SaaS version have unknowingly already been using the Sandblast technology for a month.

“We’re changing the ground rules here,” Andy Feit, head of Check Point’s threat prevention product line, said in an interview. It’s an obstacle malware authors can’t avoid,” he said. “You’re going to get caught as you try to get in the door.”

Sandblast looks for malware that tries to insert something into memory. “If we can watch that behavior and catch it right then we can prevent it from getting a toe-hold,” he said.

The solution also includes Check Point’s previous threat extraction capability, which creates a clean read-only version of a suspect file for those who can’t wait for a file to be inspected. (There are options for infosec administrators to set on how much content this applies to, and whether users can over-ride it). 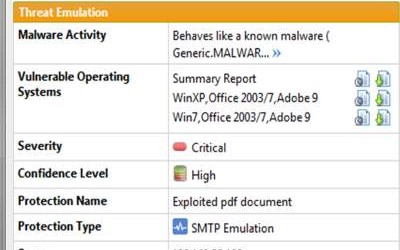 “It allows user to see what was in the document,” Feit said. “In a lot of cases all user needs to do is review it, and not edit it. This gets around the user frustration level of security getting in the way of business.”

The four appliances start at under US$30,000 and go up to under US$200,000, a model that can handle millions of emulations a month.

Howard Solomon
Currently a freelance writer, I'm the former editor of ITWorldCanada.com and Computing Canada. An IT journalist since 1997, I've written for several of ITWC's sister publications including ITBusiness.ca and Computer Dealer News. Before that I was a staff reporter at the Calgary Herald and the Brampton (Ont.) Daily Times. I can be reached at hsolomon [@] soloreporter.com
Previous articleHP’s cloud-based DNS traffic analysis to spot early signs of malware
Next articleInsider threats: Some telltale signs that could tip off CSOs and their teams