They are the 6U-sized 4100 firewall/IPS Security System,  new versions of it Smart-1 Appliances, which enable organizations to consolidate security policy, log, and event management1 devices that analyzes data logs; and the newly-named Next Generation SmartEvent software blades, which run on the Smart-1s.

Aimed at large data centres and telecommunications infrastructures, the 4100 Security System uses the same multi-blade architecture of the larger 6100 but in a smaller chassis — 6U versus 15U. 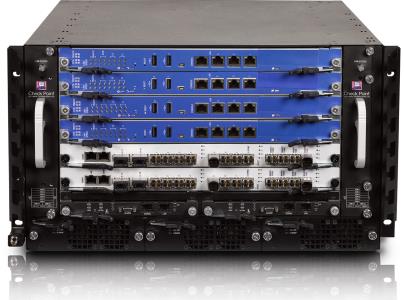 It offers 30 10Base F SFP+ ports and four 40Base F QSFP ports with three hot-swappable power supplies. It delivers up to 11,000 SecurityPower units (SPU), 40 Gbps of firewall throughput, and 25 Gbps of  IPS throughput.

It can hold up to four security gateway modules and two security switch modules It has a connection capacity of up to 80 million concurrent connections and 1.1 million connections per second for demanding transaction environments, the company said.

“The 41000 builds upon the technology found in the industry’s fastest Security System, the Check Point 61000, and delivers the power, extensibility and performance needed to secure the data center of the future,” Dorit Dor, vice president of products, said in a release. “Protecting demanding network environment requires that both security and performance to be uncompromised. The 41000 Security System brings together Check Point’s innovative hardware and software solutions that in turn accelerate network security.”

They store three times as much data as the previous models, the company said, enabling years of forensic investigation. They can also store up to 100GB of logs per day and can index up to 44,000 logs per second. Additionally, report generation is greatly accelerated through Smart-1 hardware optimization, Check Point said. A Threat Prevention view based on weekly log data can now be generated in ten seconds or less.

The manufacturer says the Smart-1 appliances are built to handle business-critical networks with redundant, hot-swappable power supplies, fans and hard drives. They have a wide variety of networking options including built-in 1GbE, and optional 10GbE and SAN interfaces.

Howard Solomon
Currently a freelance writer, I'm the former editor of ITWorldCanada.com and Computing Canada. An IT journalist since 1997, I've written for several of ITWC's sister publications including ITBusiness.ca and Computer Dealer News. Before that I was a staff reporter at the Calgary Herald and the Brampton (Ont.) Daily Times. I can be reached at hsolomon [@] soloreporter.com
Previous articleA book for CIOs, written by one, explains the role’s future challenges
Next articleSurvey pinpoints top app development challenges for CIOs