Each year, CanadianCIO, in partnership with Rogers Communications, surveys chief information officers and business leaders across the country. The goal is to provide a uniquely Canadian perspective on the challenges that face information technology leaders, the trends that are evolving in IT, and the successes these leaders are accomplishing.

This year’s report, CanadianCIO Census 2015: The Collaboration Imperative, reveals several such trends, as well as areas where progress on the Canadian business technology front is lacking.

As the title of the report suggests, CIOs have placed a strong emphasis on collaborative technologies. This is paying dividends for those CIOs (and their equivalents) who are deploying them. Once seen as a roadblock to business progress, many IT departments are now viewed as an enabler of business process technology thanks to improved collaboration between IT and the business. Moreover, it’s paying off in terms of the amount of budget that can be directed toward innovation instead of simply keeping the lights on; while CIOs report that two-thirds of their IT budget was dedicated to operations, that number is well down from the 100 per cent it was years ago. And collaboration is paying dividends in terms of increased budgets and a reduction in “shadow IT”— situations in which users create their own technological workarounds to make their business processes suit them better, running the risk of fragmenting strategy and support.

But extending the collaborative process to partners outside the organization remains a sticking point. Employee-to-employee collaboration across different organizations is still a concern. While it can expose useful, usable and efficiency-driven data to the right people, many CIOs believe it can also expose it to the wrong people. 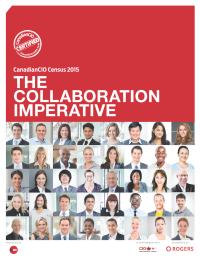 IT World Canada Staff
Previous articleNorthern Backup explains the tipping point for storage virtualization
Next articleInteractive map: Which Canadian region spends the most on IT security?