The Canadian tech sector is a swarm of smaller, high-growth firms that is nevertheless more stable than sectors like construction, oil and gas. The data comes from an in-depth study released this week by Ryerson University.

The Brookfield Institute for Innovation + Entrepreneurship (BII+E), a non-profit arm at Ryerson focused on innovation research, has released The State of Canada’s Tech Sector 2016, a report that breaks down the technology sector’s key characteristics and its contribution to the economy.

The tech sector, which consists of 71,000 companies, employs around 5.6 per cent of all working Canadians (864,000 of them), and they tend to make more than workers in other sectors, said the report. The average tech employee earns $67,000 per year compared to a national average of just under $48,000.

Technology firms are very small and widely distributed. Over two thirds of them (69 per cent) have 1-4 employees, compared to 54 per cent across all industries. Yet this swarm of small firms is responsible for 7.1 percent of Canada’s economic output, which makes it bigger than the financial sector at $117 billion, according to Brookfield.

What’s interesting is the list of sectors that surpass it. Construction and real estate beat the tech sector in terms of GDP, although you have to wonder how long that will last if the bubble bursts. Natural resource extraction still leads technology in GDP, but we’ve all seen how volatile that can be. The report reflects this relative volatility in its chart: 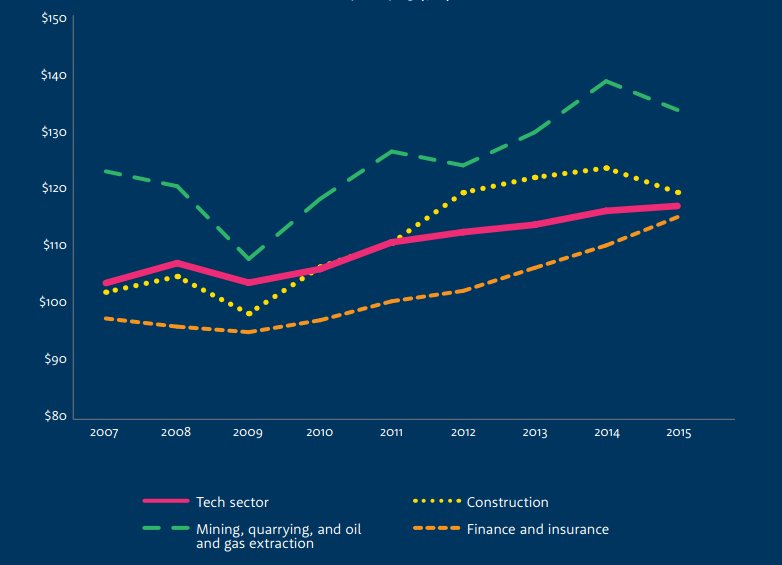 The Institute didn’t limit technology just to ICT when putting together its research. It included as tech sector firms any company that counted 15 per cent of more of their employed base as tech professionals, which is three times the national average. It also included other industries that play a critical role in tech, such as aerospace, pharmaceutical and chemical manufacturing.

ICT economic output still makes up the biggest proportion of its technology community by far, at 61.2 per cent, and employed 55 per cent of the workers in the broader tech sector. The majority of firms in Brookfield’s technology group (57 per cent) fell into the ICT category.

The other key figure that stood out in this report was innovation. The tech industry in Canada as a whole spent $9.1 billion on innovation in 2015. That made it the biggest spender in R&D by far. ICT comprised about half of that – or, to put it in perspective, less than what Verizon just paid for Yahoo.

Technology firms seem to commercialize their research more readily, as 57 per cent of businesses in the ICT sector have introduced a product innovation in the last three years. That puts it far above the other industry sectors, and is also a considerable improvement over the prior year.

What are the potential challenges for the Canadian tech sector? The small relative size of the average tech firm suggests that many of them are newer startups, which makes their future less certain. Brookfield didn’t have deep enough data on this to be sure. However, it did find that 84 per cent of technology businesses are profitable, which is a positive sign.

If many of these firms are indeed newer ones, it also points to substantial growth potential for the industry in the next few years, as long as they survive.

Tech sector companies are distributed far and wide in Canada, but there were some peaks and troughs. Montreal had the highest concentration of technology firms, followed by Toronto. Kitchener-Cambridge-Waterloo, Canada’s tech triangle, came in a surprising third. London ranked lowest, behind Saskatoon, Winnipeg and Hamilton.

Danny Bradburyhttp://www.wordherder.net
Danny Bradbury is a technology journalist with over 20 years' experience writing about security, software development, and networking.
Previous articleMalicious JavaScript takes a break after an “explosive” quarter of growth for ransomware
Next articleMicrosoft rolls out its Windows 10 Anniversary Update to the enterprise