Among the humdrum obligations corporations have in Canada is to be registered and regularly file documents in every province they do business.

But this traditionally paper-based function is open to errors and inconsistencies from province to province with companies that have similar names, as well as name and address changes for a variety of reasons including mergers and acquisitions.

It can be a headache for citizens as well as governments and legal officials trying to search corporate registries across the country.

A blockchain-based proof of concept registry unveiled this week at the Identity North conference in Toronto shows the technology could be an answer for one or a number of provinces.

It offers the advantage of a registry whose data can’t be deleted but can show a history of approved changes through an audit trail. And if networked across provinces, can show updated information immediately to all users.

Developed by IBM Canada, the province of British Columbia and the Digital ID and Authentication Council of Canada (DIACC), the proof of concept uses the Hyperledger Fabric, a blockchain framework hosted by The Linux Foundation, which offers a secure model to record and share transactional information.

It showed registry information can be created and amalgamated with existing records and displayed through a Web-based viewer.

As a proof of concept (PoC) whipped together in two weeks it isn’t ready for prime time yet. That would take adaption with more complex systems and policies used in each province. But those involved in the project say it’s another example of how governments could use blockchain.

The result was “fabulous,” project manager John Ouilette of IBM Canada said in an interview. “There’s such an incredible interest in blockchain. What DIACC did was simply de-mystified what it is and isn’t.”

DIACC is a public- private partnership developing a digital identification and authentication ecosystem to encourage people and businesses to do more online transactions. Its main project is the soon to be released Pan-Canadian Trust Framework for allowing residents to use personal data stored by governments, banks and telcos for confirming digital identity.

In an interview council president Joni Brennan said the intent of the project was to allow participants to experiment and learn fast about a new technology. In this case the potential value could not only be to those who run corporate registries but also help company officials in their efforts to create and manage organizations.

For those who want a technical description of the PoC, a Node.js server delivers web content to the user in HTML and JavaScript. Communication from the browser to the server is done via a web socket and allows for constant dual-channel communication between the web server and the browser. The communication from the Node.js server to the backend blockchain network is delivered via a RESTFul HTTPS service. The blockchain network implements what is called a smart contract in GoLang and uses version 0.6 of the Linux Foundation’s Hyperledger Fabric. 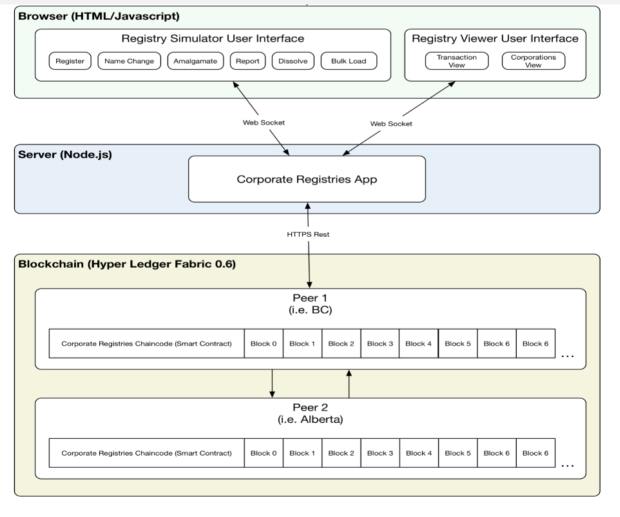 It’s the third identity-related proof of concept overseen by DIACC. It uses PoC’s to spur governments and the private sector to look at ways of moving paper-based transactions online and take advantage of the global digital economy.

Howard Solomon
Currently a freelance writer, I'm the former editor of ITWorldCanada.com and Computing Canada. An IT journalist since 1997, I've written for several of ITWC's sister publications including ITBusiness.ca and Computer Dealer News. Before that I was a staff reporter at the Calgary Herald and the Brampton (Ont.) Daily Times. I can be reached at hsolomon [@] soloreporter.com
Previous articleLCBO targets $1 billion in e-commerce sales as leadership pushes for transformation
Next articlePersirai now biggest of IoT botnets