Canada boasts growing ecosystems, especially in AI and manufacturing, according to report

Startup hubs such as Silicon Valley, London and New York are still the world’s top players, but several Canadian cities are punching above their weight class when it comes to AI, advanced manufacturing and robotics, according to a new report.

Canada is doing a good job of creating new technologies, investing in research and producing “brilliant” engineers, said JF Gauthier, founder and CEO of Startup Genome. Together with the Global Entrepreneurship Network (GEN), Startup Genome produced the 2018 Global Startup Ecosystem Report, which for the first time, produced advanced analysis of 15 startup sub-sectors in which technology-based startups are creating economic value.

“We’re very well positioned in pretty much all sub-sectors – and these sectors are seeing more investment,” Gauthier told ITWC.

He praised the federal government’s investment in sector-focused super clusters, and suggested it will lead to even more corporations – like Amazon, for example – setting up shop in Canada. 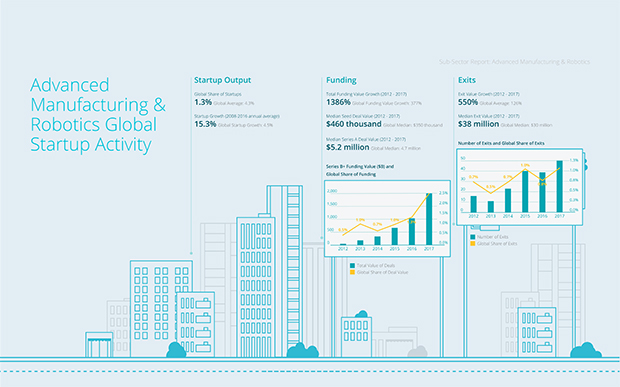 Six Canadian ecosystems – Toronto-Waterloo, Vancouver, Montreal, Ottawa, Quebec City and Edmonton – grace the report’s list of thriving tech ecosystems, the newest addition being Edmonton. The city is benefiting greatly from the University of Alberta, one of the top five research universities in Canada with more than $500 million in annual external research funding. At a median age of 36.3 years, Edmonton is also home to Canada’s second-youngest population.

“The city also offers a highly cost-competitive business environment in the global comparison, as confirmed by KPMG, with no provincial retail sales-tax, no provincial capital taxes and no payroll taxes,” the report reads.

Vancouver continues to be one of Canada’s top tech ecosystems, and is host to some of the country’s top health and life sciences, cleantech and gaming sub sectors, the report says, citing success stories such as Global Relay, Hootsuite, and Slack. Last year, Vancouver was ranked number 15 in Genome’s 2017 global rankings.

Toronto-Waterloo – Startup Genome has been grouping the two cities together since last year, when it ranked the prominent Canadian ecosystem 16th among global startup rankings – boasts some of the world’s leading research in AI, life sciences and robotics, thanks to the area’s 16 universities and colleges, notably the University of Toronto and University of Waterloo, which both have internationally recognized programs in computing sciences and engineering.

This year, Startup Genome decided to analyze the local connectedness of each ecosystem, and determined Toronto-Waterloo was the top one in Canada. Local connectedness is about the tight-knit relationships tech clusters have with other local founders, organizations and investors, a trait Gauthier said is strongly associated with higher startup performance.

“Strong local connectedness is the glue that holds these ecosystems together,” he explained, adding this trait has never been measured to this extent. “The closer they are connected, the more they help and advise each other – all of that makes an ecosystem stronger.”

But Canada has to do a better job of making sure new ideas generate wealth that stays in the country, said Gauthier.

“Commercialization is still a big problem for Canada,” he said. “But the rise of deep tech is playing to Canada’s strengths. We’re very well positioned in robotics, AI – this is good news for Canada that these sectors are seeing more investments and scaleups.”

Other Canadian ecosystems to watch out for

Ottawa: The capital of Canada thrives on a science-based economy. It’s home to the National Research Council, has the country’s highest R&D spending per capita, and educates around 25,000 students specializing in STEM fields. The startup ecosystem is gaining steam, with Shopify at the forefront. From 2016 to 2017, local VC investments doubled in key areas such as AI and Big Data.

Montreal: Entrepreneurs and startups can find a good home in Montreal, which offers them an affordable cost of living,  cultural attractions and a large pool of more than 90,000 skilled iCT workers. World class universities such as Polytechnique, ETS, Montreal, University of de Montreal, UQAM, McGill University and Concordia University continue to feed the ecosystem with talent and research. The city also hosts Startupfest, an event that has grown into a global gathering of entrepreneurs, founders, investors, and mentors. Montreal-based companies received $727 million in VC across 132 deals in 2017 according to Canada’s Venture Capital & Private Equity Association (CVCA).

Quebec City: Companies operating in the city have access to some 60,000 graduates in the fields of IT, mathematics and engineering along with a large and highly skilled technical workforce. Quebec City counts more than 300 companies operating in the broader ICT sector including IBM and General Dynamics. The city hosts several renowned ICT research centers, including Defense Research and Development Canada (DRDC Valcartier). Leading startups include LeddarTech, a developer of LED detection and solutions for object recognition and distance measurement applications. The company raised $101 million in a Series C round last year from corporate investors like Delphi and Osram, among others. Another interesting example is Coveo, an enterprise software company, that raised $35 million in Series C in 2015.

Startup to Startup: A conversation with Leila Lavaee