Apple’s newest tablet devices are the iPad Mini 3 and the iPad Air 2.

The devices comes with features that previously were available only on iPhones. These include Touch ID, a finger sensor for authentication, as well as the new iSight camera capable of taking photos in sequential bursts and slow motion video.

The iPad Air 2 has an eight megapixel rear facing camera just like the iPhones. Previous iPads only had a five megapixel camera.

The starting price in Canada for the iPad Air 2 will be $549. Apple got rid of its 32GB iPad model.

The iPad Air 2 Wi-Fi model will have 16GB and 64GB versions. They have 9.1-inch display with 2048 x 1536 resolution, 64-bit architecture, a new ABX chip that delivers 40 per cent better CRU performance  and two times faster graphics performance than previous models. The device has a 10-hour battery. 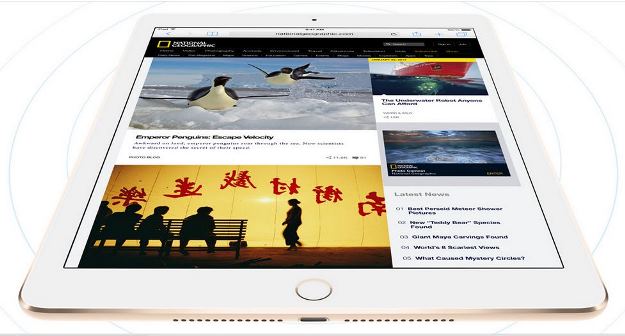 Apple also showed off the latest version of its iPad Mini. It will have a starting price of $439 in Canada for the 16GB/Wi-Fi version.

Both iPad Air 2 and iPad Mini 3 will begin shipping next week, but customers can make advance orders starting Friday.

“It’s been an incredible year and tremendously busy,” CEO Tim Cook said during a presentation.

For the first half of this year, Apple shipped 29.6 million iPads, down 13 per cent from the same time last year.

The company has been facing stiff competition from cheaper tablets running Google’s Android OS, many of which have microSD slots for added memory — a feature iPads don’t have. Earlier, Google announced that its latest Nexus 9 tablet will ship next month with a starting price of US$399 – $100 less than the 9.7-inch iPad Air.